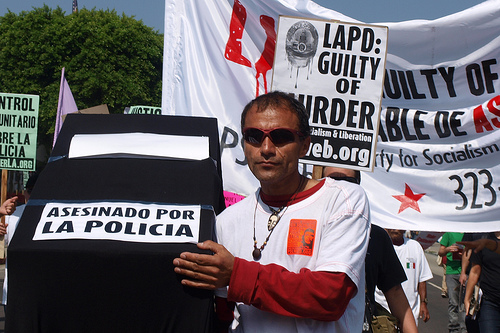 Protesters delivered a symbolic coffin to the doorstep of LAPD headquarters downtown. 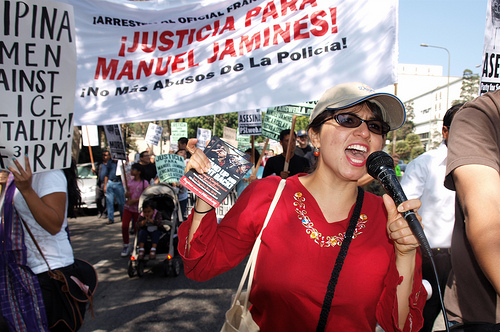 The unpermitted march took and held the street all the way through Westlake and downtown Los Angeles.

On Sept. 18, hundreds of people came out for a march and rally in Los Angeles in response to the murder of Manuel Jamines, a Guatemalan immigrant day laborer and father. Jamines was killed by police on a busy intersection in the immigrant Westlake neighborhood near downtown Los Angeles on Sept. 5.

The ANSWER Coalition (Act Now to Stop War and End Racism), the Union of Guatemalan Immigrants, the Full Rights for Immigrants Coalition and many other community organizations called this march more than one week earlier to follow protests that occurred immediately after Jamines was murdered. ANSWER members passed out thousands of flyers and posters in the community every night before the march, and held several well attended press conferences with other organizations.

On the day of the action, protesters gathered early in the morning at 6th and Union Ave., where the shooting took place. The objective was simple: begin in the community where it happened, a community daily subjugated to police terror. In the eyes of the community, the police act as an occupation force, harassing, brutalizing, and even killing poor and working class people.

As soon as the march started, members of the community joined along the way, as many onlookers chanted and applauded in support. Demonstrators carried placards that read “LAPD: Guilty of murder!” and “Justice for Manuel Jamines!” Chants echoed throughout the streets, “We want justice, jail killer cops!” The crowd was young, multinational and united in struggle.

There was no permit for the march. The LAPD wanted people to march on the sidewalk, but due to the large number of protesters and their anger and militancy, the crowd was able to take and retain the streets. The protest went through Westlake, through downtown and poured out onto Broadway, the largest and busiest street in downtown Los Angeles. Dozens of people joined the march on Broadway—the march route had been published in Saturday’s La Opinión newspaper.

The march ended in front of the LAPD’s brand new headquarters and next to City Hall, the seat of political power in Los Angeles.

There were many speakers at the end rally including members of the Union of Guatemalan Immigrants, Vamos Unidos USA, National Lawyers Guild, Party for Socialism and Liberation, ANSWER Coalition, AF3IRM, By Any Means Necessary, Homies Unidos, Echo Park Community Coalition, Students Fight Back, Frente Unido de los Pueblos Americanos, and the Revolutionary Communist Party, among others. All of the speakers commented on the crisis of police brutality that is sweeping the country. Indigenous Aztec dancers opened the rally with a ceremonial dance.

Rosa Posadas, president of the Union of Guatemalan Immigrants, spoke about the Westlake community and the daily police repression they face. She characterized the killing of Jamines as “an assassination” and called for a continued struggle to bring his killer to justice.

Peta Lindsay of ANSWER articulated the protest's demands: “We are here today to get justice for Manuel Jamines. That means the LAPD officer who killed Jamines be arrested for murder. We must have community control of the police with elected, all-civilian boards. And we want an immediate end to racist harassment, profiling and raids in our communities.”

Although there was an organized attempt to divert the march away from the political target of LAPD headquarters and confuse the crowd, neither the police nor anyone else was able to undermine the strength of the action. A group of people did march to MacArthur Park. But in the end, the determination of the organizers and community members to march on the LAPD shone through.

It was the first protest to rally on the steps of the new LAPD headquarters. Protesters delivered a symbolic coffin with the words “Assassinated by LAPD” in English and Spanish draped on it.

The march downtown was covered by media across Southern California and the world. Local channels NBC, CW, KCAL 9, UPN and Univision gave significant coverage of the march, along with the AP, Yahoo News and Photos, China’s Xinhua News, Press TV and RT.

Protester Carlos Aguilar expressed his enthusiasm about the march to ANSWER after the rally: “Today’s action was important because we spoke out for justice and against the police killers who terrorize our communities. Marching without fear in the middle of busy downtown streets was so liberating. I will continue to fight for justice for Manuel Jamines and all victims of police violence.”