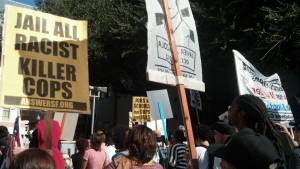 A movement against police brutality is emerging and growing across the United States. This year in California there have been both statewide and regional mobilizations. This second mobilization was at the California State Capitol in Sacramento was on October 22, the National Day Against Police Brutality.   Hundreds of people from all across California gathered. Central to the people's demands was justice for the countless victims of police brutality--meaning jail for the vicious cops who continue to kill unarmed people without so much as a slap on the wrist for their crimes. Over 50 families with loved ones brutalized or killed by cops were present. This included the families of Ernest Duenez Jr. (killed by police in Manteca on June 8, 2011), Alan Blueford (killed by Oakland PD on May 6, 2012), Oscar Grant (killed by Oakland BART police on January 1, 2009) and many more.

Family members took the stage and denounced the actions of the police. Ron Thomas, who has an active lawsuit against Fullerton, Calif., for the beating and wrongful death of his son Kelly Thomas, spoke to the crowd about the brutality his son faced. "It wasn't just the killing, it was the taunting," he told the crowd before he described the way six cops insulted and disrespected his son before severely beating and tazering him in a manner that led to his death.   Along with the families, community organizations had a big part in putting on the demonstration. The ANSWER Coalition (Act Now to Stop War and End Racism), National Brown Berets, the Party for Socialism Liberation (PSL) and others took part. These organizations helped flyer and promote the demonstration by mobilizing their communities and especially youth.   Speaking on behalf of ANSWER, activist Frank Lara chanted "La migra, la policía, la misma porquería" to highlight the interconnected struggle against police brutality and for immigrant rights. Lara explained that we need to build unity with all people who are struggling because we are all fighting the same racist capitalist system.

The demonstration opposed racist capitalist state violence in general. In addition to the prosecution of killer cops, the people demanded an end to the Police Bill of Rights, ICE raids, stop-and-frisk laws, mass incarceration and more.

Organizations tabled along the capitol grounds and passed out information to the community. A mock life-size replica of a SHU (the Security Housing Unit isolation cells used in California prisons) was set up by The Stop Mass Incarceration Network and put on display. The Party for Socialism and Liberation held screenings of "No Justice, No Peace," a LiberationNews.org documentary on California's Battle Against Police Brutality and Racist Violence.

The demonstration left the capitol and took over the streets for a march, lasting more than an hour. The marchers stopped at Attorney General Kamala Harris's office and the notorious Sacramento County Jail. Barred from access to Kamala Harris's office, the people demonstrated outside and read a list of the victims’ names, demanded justice and left a mock coffin at the door adorned with victims’ names. Kamala Harris has the power to bring these cops to justice but has so far refused to act.

In a cruel and ironic sign that the police will continue to brutalize the people, 13-year-old Andy Lopez was killed by Sonoma County Deputies on the same day and same time as the Sacramento demonstration. Lopez was shot seven times and killed while walking to his friend’s house. Police representatives are justifying the killing by claiming the police mistook an air-soft gun he was carrying for an automatic rifle. This senseless killing is endemic of the cops’ shoot-first, cover-up-later mentality. The cops exist to protect the racist system and the rule of the 1%. Only a massive, revolutionary fight-back movement can bring justice for Andy Lopez and the countless innocent people murdered by cops.

A statewide network of families and organizations is continuing to form to take a stronger stand against the police. A large demonstration is planned for Tuesday, October 29 in Santa Rosa to begin the struggle for justice for Andy Lopez. The time to join the movement against police brutality and racism is now! All power to the people!