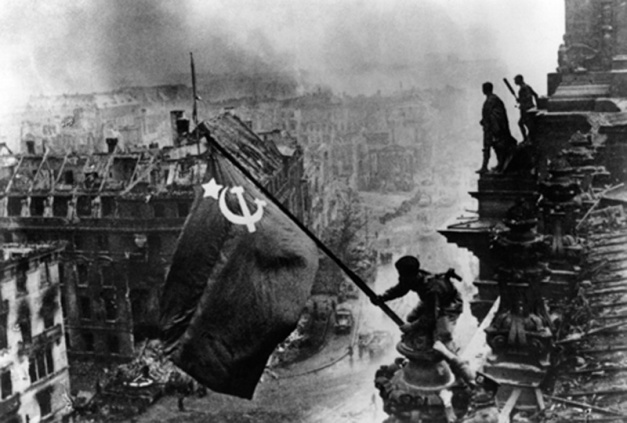 Hundreds of thousands of people marched through the streets of Moscow on May 9, marking the 70th anniversary of the defeat of fascism and the end of World War II in Europe.

Despite the irrefutable fact that the Soviet Union played the central role in destroying the vaunted Nazi war machine, several of its leading wartime allies, including the United States and Britain, boycotted the historic event. So, too, did the present German government headed by Angela Merkel.

Ironically, their reason for boycotting was Russia’s support for forces resisting the takeover of the Ukrainian government in a 2014 coup spearheaded by neo-Nazi and other right-wing forces. (Russia and Ukraine were both part of the Soviet Union, which was disastrously dismantled in 1991.)

Among the world leaders on the reviewing stand alongside Vladimir Putin, President of the Russian Federation, were Xi Jinping of China, Jacob Zuma of South Africa, Raul Castro of Cuba, Nicolas Maduro of Venezuela, and Pranab Mukherjee of India.

The “Victory Day” event began with precision military parade of 15,000 troops. It included units from China, India, Mongolia and many former Soviet republics, as well as detachments from all branches of the Russian military, concluding with a display of armor, missile and air forces.

Then came hundreds of thousands in the “Immortal Regiment,” a moving, seemingly endless and densely packed stream of people carrying photos of relatives who had fought and died in the war. Others carried red hammer-and-sickle banners commemorating the raising of the Soviet flag over the German Reichstag (parliament) in May 1945, as well as military banners and Russian flags.

When the Nazi assault on the Soviet Union began on June 22, 1941, few outsiders in the world believed that the Soviets could possibly prevail. In the early months of the war the German war machine, the most powerful ever created up to that point, swept across Ukraine, Belarus and the Baltic states. But at the end of 1942, in the world-historic battle of Stalingrad, the tide turned. It was followed by the crushing defeat of the Nazis battle of Kursk, the largest tank battle in history.

The Red Army that went on to liberate not only their own country, but most of Eastern Europe. It was only due its centralized planned economy and the fierce determination of the Soviet people that victory was possible.

But the cost was almost beyond belief. Between 27 and 30 million Soviet citizens were killed, approximately half of them civilians. Tens of millions more were wounded, orphaned and made homeless. More than two-thirds of industrial and agricultural production was destroyed, and in many districts of the western Soviet Union everything was gone.

By comparison, the U.S. deaths in World War II were 420,000, a huge number but less than 2% of those suffered by the Soviet Union. No damage was inflicted on the continental U.S. or its economy, which actually grew astronomically during the war.

Despite the enormous disparity in sacrifice, people here are still falsely educated to believe that it was the U.S. that played the major role in defeating the Nazis.

The “Immortal Regiment” tradition only started in 2012, but has spread worldwide, including to cities in the United States.