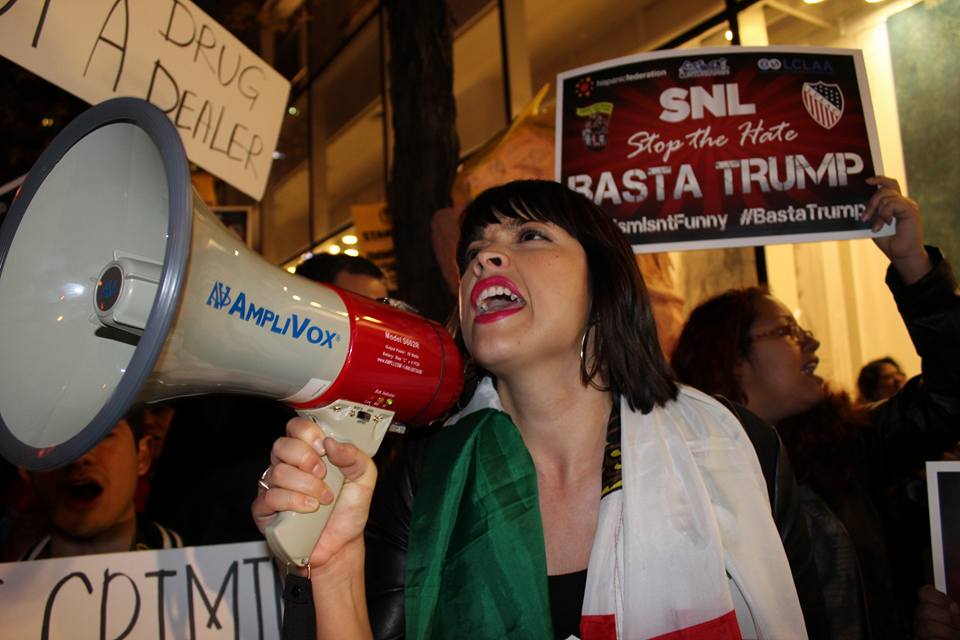 When NBC’s Saturday Night Live brought viewers a guest host, they didn’t bring their best. Instead they brought on Donald Trump. A racist billionaire dead set on normalizing the criminalization and hatred of working class immigrants and people of color, Mexicans in particular. Protesters were not entertained by him, or his painfully awkward “Hotline Bling” jingle.

On November 7, the day Trump was set to host SNL, a diverse coalition of progressive organizations including Ayotzinapa NY, the ANSWER Coalition and the NYS Youth Leadership Council held a rally of hundreds of people outside of NBC Studios to protest GOP presidential candidate Donald Trump. The message of the organizations was that the racism and hatred spewed by Trump needs to end and that NBC is showing itself to be complicit in Trump’s hate speech and fear mongering.

Earlier in the year, when Trump wasn’t as popular nationally, NBC decided to cut ties with Trump citing his racist anti-immigrant tirade. Now that Trump has become a super celebrity (in large part because of further sexist/racist comments) SNL invites him to host in a blatant attempt to boost ratings and increase NBC’s profit margins. This was a direct slap in the face to the people targeted by Trump’s hateful propaganda.

Protesters proudly waved intricate banners and Trump piñatas with bad hairdos chanting “When I say dump, you say Trump!” And, “We are workers, we are not criminals!” The organizations say to continue to give such a large platform to Trump legitimizes his hateful message which depicts undocumented immigrants as criminals and even rapists.

While police demanded the crowd stay inside their barricades during the rally, afterwards protesters marched around Rockefeller Center and NBC Studios. The march received the attention of bystanders and people who took it upon themselves to join the energetic rebellious crowd and have their voices heard.

Despite hundreds of thousands of petitions sent to NBC and hundreds of protesters outside of SNL studios Trump ultimately still hosted Saturday Night Live. However, organizers say that Saturday’s protest was about more than just stopping NBC from hosting Trump.

As Karina Garcia explained, “Our protest is so much bigger than Trump. Our movement is so much more important than Trump… This is an opportunity for us to overthrow this system of racist, white supremacy in this country… We need to continue these demonstrations in defense of all people who are being scapegoated by the billionaires who want to trick us into fighting each other instead of fighting against them.”