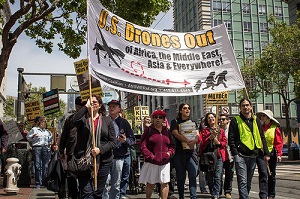 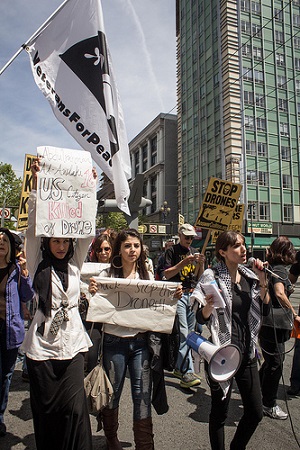 The event was MC'd by Salma Elshakre and Frank Lara of the ANSWER Coalition. “There's this belief, that somehow if we keep spending more money on these machines, the people in this country will be safer,” Lara began, “but what we're seeing is not only the expanded use of drone-warfare abroad, but that it's also becoming a tool to subdue the population at home.”

“One of the things that has come out recently is that most drone strikes are not even on 'known targets'” said Mazda Majidi of the ANSWER Coalition. Most attacks are “signature strikes”—on people who merely “look” like “terrorists,” which is to say Muslim men between the age of 20 and 40.

Maria Antonia Palmares, of the National Committee to Free the Cuban Five, asked, “What other country in the world do you know that has organizations like AFRICOM to intrude on and control entire continents?” AFRICOM is the U.S. command structure to to dominate Africa. Palmares pointed out the grotesque irony that the U.S. was imprisoning five Cuban men for trying to stop terrorism against their country while committing massive acts of terrorism all over the world through the use of drones.

A number of local TV stations, including Channels 2 and 5 covered the protest. A dramatic symbol which drew much attention by passerby’s and the media, was the World Can’t Wait’s one-fifth size replica of a Predator drone.

After the speak-out, there was spirited march to UN Plaza. There, the marchers were addressed by Dr. Henry Clark of the West County Toxics Coalition, a long-time leader in people’s movement in Richmond, Calif. “We got the message to the Obama administration: no more drone attacks on anyone, anywhere!” Dr. Clark continued, “We must continue to be strong and resist this war on the people. ... We must continue to fight until the final victory.”