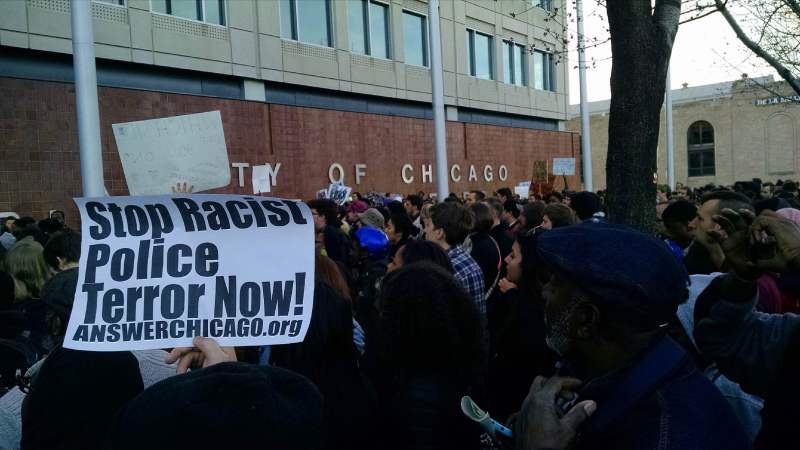 On April 28, over 500 people gathered in front of Chicago Police Headquarters at the corner of Michigan Avenue and 35th Street in Chicago’s Bronzeville neighborhood in a show of solidarity with the uprising taking place in Baltimore against the racist police murder of Freddie Gray. The anger of the demonstrators was further fueled by the fact that Chicago Police Detective Dante Servin had been cleared on April 20 of all charges for the murder of an unarmed, 22-year-old African American woman, Rekia Boyd.

“He says he has no remorse!” said Sutton Boyd, Rekia’s brother, as he spoke to the protestors. “We’re going to make sure my little sister didn’t die in vain!”

Servin, off-duty and firing an unregistered 9mm semiautomatic weapon, fired over his shoulder from inside of his car and shot Rekia Boyd in the back of the head, killing her instantly. She was walking with her two friends and her boyfriend down an alley; all were unarmed and had their backs to Servin.

Servin claimed that Rekia’s boyfriend had a cell phone that he said he thought was a gun. Servin claims to have “felt threatened” and fired on the group. The judge then cleared him of all charges.

“They just found this man not guilty on all counts, and he blew my daughter’s brains out in the alley,” said Rekia’s mother in a statement following the ruling.

People in the crowd chanted, “We Want Dante!”

When Sutton Boyd saw the footage of the Baltimore uprising, he asked reporters, “Who wouldn’t be outraged at somebody getting off scot-free for murder just because they have a badge? Does that make them more human than folks without a badge?”

Organized by the Black Youth Project, We Charge Genocide and many others, over 500 demonstrators began marching down 35th Street towards Cottage Grove Road. Defying police and their attempts to divert the route, the protesters moved right through the police, with residents cheering from their homes and many joining the march. People chanted, “Black Lives Matter!”, “Hands Up, Don’t Shoot!” and “We are Baltimore!” Members of ANSWER Chicago carried signs reading, “Stop Racist Police Terror Now!”

The protesters marched 4 miles to the University of Chicago Hospital, stopping at the McDonald’s Restaurant at 47th Street and Cottage Grove where organizers denounced the giant fast food chain and the like for relegating Black and Brown youth into jobs with poverty wages and no union representation while racking in billions of dollars for themselves.

Black People all over the country are beginning to feel their power and are standing up against the racist justice system that systematically locks up and murders it youth. The people of Baltimore have inspired all those who thirst for justice, and they give many the courage to take to the streets to demand an end to police terror.

More demonstrations have been planned in Chicago. Justice for Freddie Grey! We Need Jobs, Not Cops!