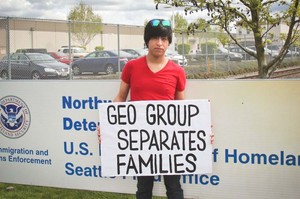 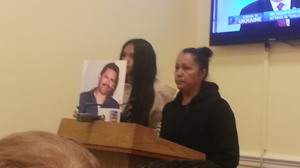 Ernestina Hernandez with her daughter

Below is a transcript of testimony by two immigrant rights hunger strikers, Jose Moreno and Ernestina Hernandez. A hunger strike demanding that the Obama administration stop deportations began in front of the White House on April 8, 2014, following a weekend of nationally coordinated actions. The testimony below was given at a congressional briefing that took place at the Rayburn House of Representatives Office Building on April 18. The briefing was moderated by Tania Unzueta, a Not One More Deportation Organizer with the National Day Laborer Organizing Network.

The White House hunger strike follows a hunger strike of thousands of detained immigrants at Northwest Detention Center in Takoma, Wash., that began on March 7. The Takoma strike similarly followed other hunger strikes in Arizona and Pennsylvania, as well as civil disobedience nationwide. It quickly spread to detention centers in Texas and other states. Immigration and Customs Enforcement (ICE) has retaliated against the detained hunger strikers by subjecting them to long periods of solitary confinement and deportation.

Hunger strikers and activists have come to D.C. from all over the country, including Arizona, Texas and New Orleans, and more are on the way. The actions are being coordinated by the National Day Laborer Organizing Network. The White House hunger strike coincided with a 48-hour hunger strike of 100 women on the National Mall, organized by the We Belong Together Coalition. This two-day action culminated a month-long rotating hunger strike nationwide.

The ANSWER Coalition stands in solidarity with the hunger strikers and the millions of immigrant families struggling across the country for an end to deportations. Brave actions such as those of the Northwest Detention Center and White House hunger strikers have escalated the fight for justice for immigrants and all working people in the United States. We call on President Obama and Congress to end the vast oppression and exploitation of immigrants and families living under the threat of deportation. Click here to learn more about the hunger strike and what you can do to support it.

We began the hunger strike after the protest on Feb. 24 organized by the Not One More Deportation campaign at the Northwest Detention Center. I was going on the van that that protest stopped. When I returned to detention that day, I told my comrades there about the protest movement going on outside. That people had wanted to stop the deportations. They couldn’t really believe it with everything that they had seen. But we began speaking with other people, including among them Ramon Mendoza, who has still continued in a hunger strike until now, he and others began to persuade the people in the detention center, saying that we needed to do something. We did not know at that moment what to do, but we would have to do something – especially if people outside were doing this. As you know, if others would be doing it, we also needed to do this. So thereafter we started figuring out what we needed to do.

So we started persuading people to act, knowing that we needed to do something, but still not knowing what. There were rumors that we could do a strike, but we didn’t have an idea of what we would do yet. So, in order to get into communicating with the people, we needed to be in touch with the other units because we could not sincerely communicate among comrades. We started to see what we could do. We wrote each other notes to pass them when people went to work, or when people went to visit the library or the medical service in order to make preparations for Friday, March 7.

So we had to be really well organized in our group in order to have the power to move the rest of the people. That’s how, on Friday, March 7, over 1,000 people began their hunger strike.

By Saturday, the demands we had made addressed the mistreatment that we were facing inside, including the medical service, the very rotten food, the high immigration bonds – many of the people [who can’t pay the bonds or don’t qualify for bond] were arrested crossing the border, or after living here for many years without any criminal record, so they stay inside for years.

On top of that, there were the high prices of the commissary and the telephone calls of the GEO Group [the contractor running the detention center].

With all this going on, the people were already tired of this mistreatment and wanted reform already, and to stop being exploited in the detention center. They want to fight their deportation cases from the outside [of detention].

Related to the demands of the protesters is the GEO Group program that they call “voluntary labor,” in which they pay you $1.00 per day. For me, it is an insult; I did not work for them. But, there are many people who are forced to work, especially when they just recently arrived in this country. And this is just another way that we see how is the GEO Group is making money off of us.

I was set to be released the following Wednesday, so my comrades asked that I would speak about the conditions that are being forced on us inside, because it is truly very horrible. It is very difficult to communicate with the outside world. So that is what I have been doing since then.

Question from the Moderator: How do you think people can change the conditions inside the detention center?

Answer: When we began organizing this, we never believed that we would garner all of this attention from all forms of media. It’s an issue that has never received so much attention, and I believe that it is putting pressure on the Obama administration. I hope this means that we could get real reform – a just immigration reform.

Question from congressional staffer: Can you explain the kind of work that people do in immigration detention to earn only $1.00 per day?

A: We work approximately 5-6 hours a day. We cook. There are other jobs, like painting the walls and anything that needs to be painted in the whole detention facility. You could be working in your own unit, cleaning bathrooms, sweeping, mopping the floors, polishing the hallways, cleaning the yard. So basically the majority of the work needed to keep the detention center running.

Testimony of Ernestina Hernandez, hunger striker and member of Alianza Mexicana, who travelled from Houston, Texas, to Washington, D.C.; Ms. Hernandez’s husband was recently deported from the Joe Corley Detention Center outside of Houston:

My husband was one of the strikers in Joe Corley. They began their hunger strike on March 17. Just like [Mr. Moreno] said, they were already tired of so much injustice inside detention, of being humiliated and mistreated inside. When they are deported, they leave for their countries without money because inside, they have to pay for everything they use.

The people who were on hunger strike, many of them were deported immediately. My husband was detained a bit longer because he was trying to fight his case from detention. Still, he was never able to have his day in court before a judge. Without anything else, [ICE] just told him that he had to leave the country. My husband said no – that his lawyer had told him not to sign anything, but they were bullies and told him that he needed to leave.

They took his hand, and forced his fingerprint on the deportation paperwork, since he did not want to sign. They told him that he is deported for life.

Melanie, our daughter, and I have been living under these circumstances for almost one year. We were scared that as soon as the hunger strike was over, that he would be deported, and that is exactly what happened.

Now, I have been on hunger strike for four days because I do not think that it is just for all of these people and the families to be deported. … My daughter and I have no more than three ways to go at this point: We can go with her father, we can stay at home crying or we can continue fighting. So I decided that we needed to continue fighting … I think that it is my job as a mother to continue our struggle.