Important victory in the struggle to defend reproductive rights! 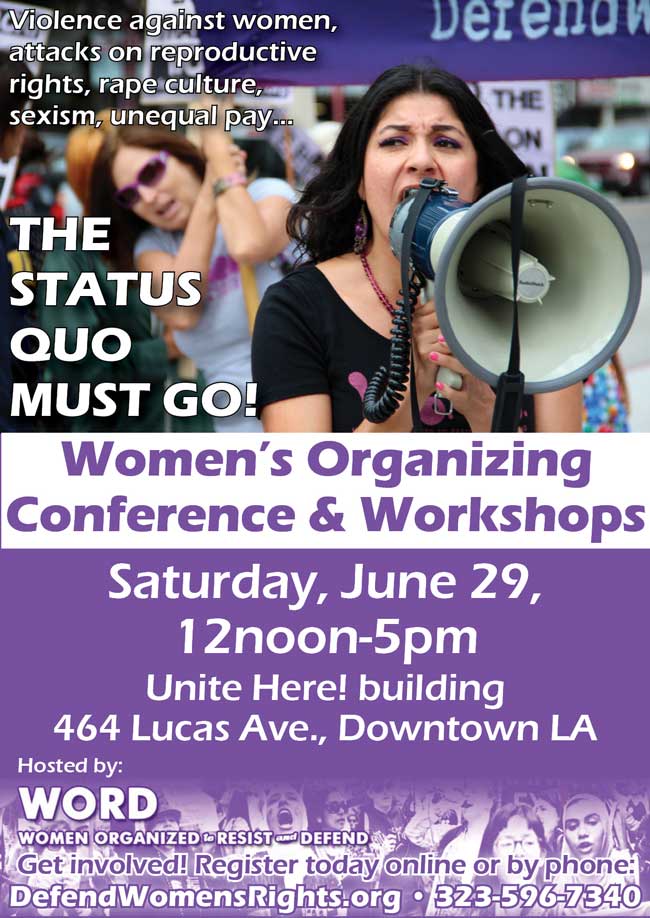 Activists and volunteers from Women Organized to Resist and Defend (WORD) are celebrating an important victory in the struggle to defend the reproductive rights of women and girls as the Obama administration announced yesterday that it plans to drop its legal appeal of a federal court ruling ordering that the Morning-After Pill drug be available over-the-counter without restrictions.

This victory comes after a 10-year-long legal and political struggle. In recent months, WORD organizers have joined with National Womens Liberation (NWL) in organizing dramatic actions in cities around the country, protesting the Obama administration’s attempt to obstruct access to the Morning-After-Pill and emergency contraception. NWL activists were plaintiffs in the case.

The Partnership for Civil Justice Fund, which represented plaintiffs in the legal case, issued a statement on June 10 announcing the victory. The statement reads in part:

“The provision of emergency contraception without restriction is a landmark victory for reproductive justice,” said Andrea Costello, Partnership for Civil Justice Fund Senior Staff Attorney and lead attorney for the National Women’s Liberation Plaintiffs. “We are going to make sure that the government does indeed comply with the Court's Order. The denial of full access to the Morning-After Pill has been an outrageous political decision and wholly without scientific basis – under both the Bush and Obama administrations.”

“It is a watershed moment in the fight for reproductive rights in the United States. Women's and girls' basic reproductive rights have been under a full-scale assault across the country,” stated attorney Mara Verheyden-Hilliard, Executive Director of the Partnership for Civil Justice Fund. “When the government finally complies with the Court's Order, for the first time women and girls will be able to have full access to emergency contraception without the government imposing improper and illegal barriers.”

Time to Organize and Fight Back!

The last few years have seen a shocking number of attacks on women: on our rights, on our bodies and on our lives. In 2011, more restrictions on women’s right to abortion were enacted than in any other year in U.S. history, and 2012 saw the second-highest number of restrictions passed. Politicians, legislators and the religious right are working furiously to strip away our rights on the state and federal level. In response to the financial crisis created by the big banks, the government is implementing severe budget cuts, which are rapidly eliminating the social programs that poor and low-income women depend on. Access to healthcare—including contraception and abortion—childcare, housing, welfare and other benefits are being slashed across the country.

You are Invited to a
Women's Organizing Conference

Join Women Organized to Resist and Defend (WORD) and other feminist and women’s organizations for a regional Women’s Organizing Conference.

Come connect with other activists, students, labor organizers and women of all ages for a day of learning, sharing experiences and building the movement for equality for women.