In memory of Erica Garner: ‘She would want us to continue to fight, organize, mobilize and be the change’ 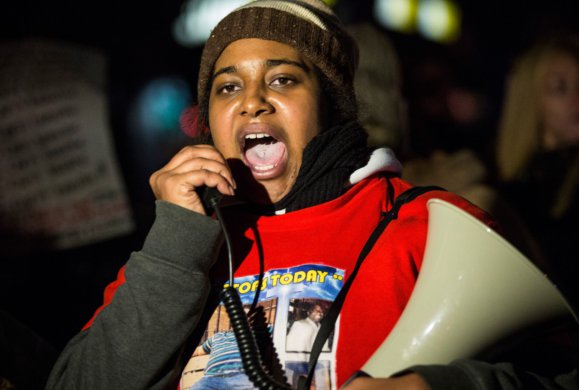 These are my words to a warrior who I had the honor to work, organize and build with, who we just lost: Erica Garner.

On December 30, 2017, Erica Snipes Garner passed away at the age of 27. Erica was hospitalized Christmas Eve after having a heart attack and leaves behind two young children. Erica also leaves behind fighters like herself who will miss her fierceness, her desire for justice and her unapologetic vigor to always say the truth — that racism is alive and well and is destroying our communities, our people everyday. There is no “post-racial America” — the whole system is racialized and it has to be smashed.

Erica Garner started organizing immediately after her father, Eric, was murdered on July 17, 2014, by undercover officer Daniel Pantaleo. Pantaleo put Garner in an illegal chokehold. Garner’s death was video recorded and the world watched in horror and anger as Eric, a father of seven, was killed. Even though his death was ruled a homicide, Pantaleo received no jail time.

Protests erupted all over the country — with Erica at the forefront. Erica, instead of having time to grieve for her father, had to instead fight for justice.

Erica would organize with Garner’s Way, the foundation she created, with actions, speak outs and protests. Whether a handful of people or thousands of people showed up, Erica would be there, uncompromising, saying that the NYPD and the whole damn system is guilty for the death of her father and all police brutality victims.

Erica understood that any one of us could be Eric Garner. Police brutality and murder are not isolated events, they are the inevitable byproducts of “broken windows” policing and the whole repressive policing apparatus that targets Black, Latino, Native and other communities. Statistics clearly show why mass organizing against police brutality is necessary; every 28 hours a Black or Brown person is murdered by a officer or racist vigilante in this country.

That is how I met Erica. Akai Gurley was murdered on November 20, 2014 by NYPD officer Peter Liang. In 2015, Erica and I planned an action in Staten Island in solidarity with Eric Garner, Akai Gurley, Freddie Gray and local activists in solidarity with the 43 disappeared student activists from the local teaching college in Ayotzinapa, Mexico.

At the action, Hertencia Petersen, aunt of Akai Gurley, along with parents of Ayotzinapa, spoke and Erica led chants. Erica loved how the families came together and stood together through this struggle, along with our sisters and brothers from Mexico.

Erica carried on the long tradition of Black women, mothers and children standing on the frontlines of struggle for their slain family members. It must have been so difficult for Erica to take on and continue this work, but it came naturally to her and she was never without energy. Her passion was clear. No Justice, no peace — we can’t stop fighting. We all can’t breathe when one of us can’t.

Kathleen Cleaver once said “We as Black women must choose how we are seen in this world.” Erica made a choice in her 27 years of life to be seen as a fighter always, whether her words were popular or not. The same media that criticized her and cut her off when she bluntly spoke out are now trying to co-opt her legacy of struggle.

But we say NO! No bourgeois media outlet can give justice to the memory of Erica Garner — only the people can through our continuation of her struggle. No politician who denied justice to Erica’s father and all victims of police brutality should be allowed to give hypocritical, farcical solidarity. Erica didn’t make room for any empty rhetorical fluff and neither will we. Erica choose to be seen and heard. We still see and hear her.

There are no words to describe the hole that has been left by the loss of Erica. People from all over the world are saying her name. This racist system took away her father and denied justice to her family and without realizing it they produced a leader. Erica would want us to continue to fight, organize, mobilize and be the change.

Erica Garner, ashe. We will carry on your work.