March on the White House: Tell Trump "No War Against Syria!" 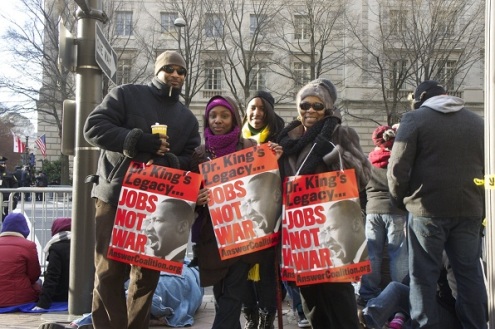 Trump tweeted: "Russia vows to shoot down any and all missiles fired at Syria. Get ready Russia, because they will be coming, nice and new and 'smart!'"

People from all over the country are demonstrating Saturday, April 14 to say "No!" to a new war in the Middle East. No war against Syria!

Even before chemical weapons inspectors were allowed in to investigate, the Trump White House promised a massive military campaign against Syria and its people. Let's not forget the lies told about Iraq's chemical weapons as a pretext for the illegal U.S. invasion in 2003 that took the lives of almost one million Iraqis and more than 5,000 U.S. military personnel.

We have to stand up and speak out just as Dr. Martin Luther King Jr. did 50 years ago when he links the movement for civil rights with the struggle against a US imperial war in Vietnam and Southeast Asia.

Fifty years after the assassination of the Rev. Dr. Martin Luther King Jr., peace and social justice groups across the country are uniting to carry on his legacy of determined struggle against racism, war and poverty. Many of these activities are being coordinated by the Poor People’s Campaign: A National Call for Moral Revival.

In his final book, Where Do We Go From Here: Chaos or Community, the Rev. Dr. Martin Luther King Jr. stated, “a final problem mankind must solve in order to survive ... is finding an alternative to war and human destruction.” This comes just after his statement in the same text that “the time has come for an all-out world war on poverty.” Today, when there is no controversy in Congress about spending at least $700 billion on the war machine while horrendous cuts are being made to almost every program designed to help people survive, these words ring as true as ever.

In the richest country in the history of countries, this situation is unacceptable. Food stamps, Medicaid, programs to save the planet and funds for affordable housing cannot and should not be held hostage to a global war-making machine – a machine aimed not at freedom or democracy but domination and control, complicit in terrible crimes.

From facilitating the brutal war in Yemen to the extreme threats directed at North Korea, Venezuela and Iran, the U.S. government has placed itself completely at odds with Dr. King’s vision: A way of life where people's needs rather than profits and imperial goals are the center of our society. This vision can be realized only if we seize the time and show that we won’t allow our future to be sacrificed at the altar of war and militarism.

Join us on Saturday, April 14 for a rally, march and teach-in against war, militarism and empire. These actions are timed to coincide with the Spring Actions 2018 coordinated events to end the wars at home and abroad.

As Dr. King said: “Science has provided us with adequate means for survival and transportation, which make it possible to enjoy the fullness of this great earth. The question now is, do we have the morality and courage required to live together ... and not be afraid.”

Your donation to the ANSWER Coalition allows us to sustain this movement against war, and for social and economic justice. The ANSWER Coalition is active in cities and towns throughout the country. We can do this work with your continuing support. Please make an urgently needed donation today.