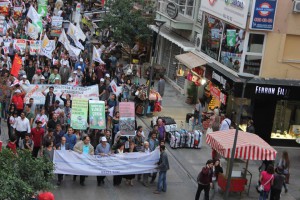 The conference included a march, where demonstrators that held signs reading: Enemy of the people: Imperialism; Hands off Syria; End the violence against the peoples of Syria; Only the people of Syria can determine the future of Syria

On October 12, an international peace summit on the crisis in the Middle East, organized by the Peace Association of Turkey, Greek Committee for International Detente and Peace (EEDY) and Cyprus Peace Council, took place in İzmir, Turkey. Representatives of the World Peace Council also attended the conference. Speakers attributed the recent rise of violence in the Middle East to  U.S. imperialist policies as well its regional client governments including Turkey, Qatar and Saudi Arabia.

The current state of the imperialist aggression towards Syria, Israeli aggression against Palestine, the divided state of Cyprus (between Greek and Turkish), the rise of reactionary groups in the Middle East, the role of these groups in the new imperialist plans, crimes committed by the ruling Justice and Development Party (AKP) of Turkey against the peoples of the region were among some of the topics covered by the speakers. Participants also discussed opportunities for common struggle against imperialism and its regional allies.

Saluting everyone in the struggle to end the imperialist aggression and wars in the region, executive secretary of World Peace Council (WPC) Iraklis Tsavdaridis said: “The true spirit of this summit is represented by the feelings of solidarity of the people of Turkey, Greece and Cyprus towards the people of Palestine as the Israeli massacres of Palestinians as well as occupation of Gaza, Jerusalem and West Bank continue. World Peace Council stands with all the oppressed people of the world. We stand with the peoples of Syria, Lebanon, Iraq as they confront the violence of the barbarous jihadist gangs that have murdered over one hundred thousand people. We stand in solidarity with the Kurdish people in Northern Syria.”  Tsavdaridis continued: “It is crystal clear that none of the coalition forces including Turkey and Qatar are about fighting for democracy and human rights for the peoples of Syria and Iraq. It is the duty of the international peace movement as well as WPC to expose the imperialist plans and the forces behind it. It is important to understand that wars, violence and exploitation are inherent in today’s system. What we need is a peace movement that moves in unity. While imperialism may look strong, it is not invincible.”

Speaking on behalf of the Greek Committee for International Detente and Peace (EEDY), Eleni Papadapoulou said:”Turkey and Qatar, along with Saudi Arabia, United Arab Emirates and recently Egypt, all U.S. allies have formed a so-called ‘coalition of the willing’ to fight against the monster they have all helped create to start with by having funded and provided arms to it.” Pointing to the failure of the four year long attempt by the U.S., NATO and E.U. forces, Papadapoulou continued: “The forces that are bombing Syria and Iraq after having created the pretext for it are the same forces. These forces are hiding a simple fact behind their military operations and the destabilization of the region. The real objectives of these forces are to control and dominate the region which contains the biggest oil and natural gas reserves in the world.” Papadapoulou ended her speech demanding from the government of Greece to shut down all U.S. and NATO bases in Greece,  put an end all military deals with Israel, not take part in any imperialist intervention in Syria and Iraq and drop out of all imperialist organizations including NATO.

Pointing to the exemplary role peace movements can play by organizing common action against the imperialist plans to divide, occupy and start new wars and the divided island of Cyprus, the President of the Cyprus Peace Council Sylva Tingerides said: “For Cyprus, we support unitary solution on the island that is based on a single nation, single international representation with a federation that consists of two societies. We want Cyprus free of all foreign troops and military bases.”Tingerides added: “While the issue of Cyprus is our priority, it is not the only issue. The current capitalist crisis in the U.S. and in Europe are deepening the crisis in many regions from Southeast Asia, to Middle East, to Mediterranean, Africa and Latin America. Imperialist forces are competing for control of new markets, energy resources and corridors, conflicts are inevitable. At such a critical moment, transcending national interests and building the bridges of internationalism, we, the peoples of the region are uniting our voices as we struggle for peace. The day is to raise the anti-imperialist struggle as we build the brotherhood of the people.”

Having gained its independence from the British imperialism in 1960, Cyprus, the third largest and most populous island in the Mediterranean has remained divided since 1974 as Turkey, using a right-wing Greek coup and the defense of Turkish Cypriots on the island as a pretext, invaded the north. The ethnic conflict between Greek and Turkish Cypriots can be traced back to the British colonial rule as the British played the two populations against one another to maintain control of the island. The British also has retained a military presence with two air bases in the south of the island.

Speaking on behalf of the Peace Association of Turkey, Aydemir Güler pointed to the fact that the struggle for peace can not be a neutral one, adding that struggle for peace is at the same time an ideological, political struggle. Güler said: “The struggle against imperialism in Turkey and the region and the struggle against reactionary jihadist forces are inseparable. Ones who don’t see that don’t have the chance for moving closer to peace.” Güler continued: “Some can go so far as to advocate the ridiculous idea that an intervention in Northern Syria by Turkey is a better option than an imperialist intervention. As the Peace Association of Turkey, we declare that we stand in solidarity with our brothers and sisters who are resisting in Kobani. We also denounce the official and semi-official fascist violence against the protests held in Turkey. We declare to the whole world that AKP government is responsible from the recent deaths in Turkey.”

The summit concluded with a  “Peace march” as the participants and residents of Izmir in the thousands took to the streets amid slogans of “AKP, get your hands off Syria,” “Long live the brotherhood of the people” and “Down with imperialism!”