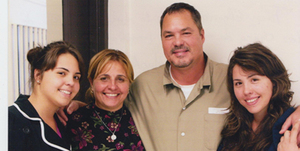 Ramon with his wife Elizabeth and their daughters Laura and Lizbeth. Aili, another daughter from a previous marriage, is visiting him these days

That day in September, 2009 when they proceeded to resentence him in Miami, in the United States, Ramón Labañino Salazar, who was still carrying a life sentence plus 18 years in prison, entered the judicial chamber with his hands held high, as a victory symbol.

Glancing around, he looked at all those present in the audience until he found his beloved Elizabeth. He smiled at her as if he were the happiest of mortals and with his look covered her with kisses. It was a fleeting moment but at the same time almost eternal.

There were so many things being said at that moment! It was just like the one that happened later when he learned that his new sentence, no less unjust, would remove 30 years of physical liberty from his life. Then too his captors couldn’t lock up his soul and spirit.

“I am by nature an optimistic man,” confessed Labañino, one of five Cuban anti-terrorists sentenced to long terms in U. S. prisons.

In response to a questionnaire, the Hero of the Republic of Cuba pointed out that, “I have always found reasons for taking a positive point of view of everything happening around me, including the fights, the injustices, and the hard things one lives with and sees in prison. He shares that title with his comrades Gerardo Hernández, Antonio Guerrero, Fernando González, and René González. (The last two are now in Cuba but not before they satisfied all sanctions against them.)

The Five are brothers in the same struggle, although they are confined in prisons far apart from each other. They took to using “us” instead of “I” and what was important for one took on a collective nature.

They did this from the beginning and every time a message arrives from them, the farewell invariably finishes with “five hugs.” That’s how Ramón ended these replies sent from the penitentiary in Ashland, Kentucky.

The son of Nereyda Salazar Verduy (deceased) and Holmes Labañino Cantillo, Ramón was born June 9, 1963, in the Havana district of Marianao. He graduated with top academic recognition, qualifying in economics at the University of Havana.

His greatest treasures are the daughters he adores, Aili (from his first marriage) Laura, and Lizbeth, as he tirelessly repeats.

When he left home to work abroad, precisely in February, 1992, Elizabeth Palmeiro, his wife, was barely eight weeks pregnant with Laura. He could not enjoy that period or the arrival into the world of Lizbeth whom he only came to know in February, 1997, just after she was born.

His comings and goings in and out of the country and then prison made it so that despite being married for 23 years, Ramón and Elizabeth have only lived together, without being apart, for barely two years. They’ve been separated the rest of the time.

Nevertheless, they built a family together, and she, behind the lines, waits for him dealing with the family project that came about despite obstacles. There they are, “his beautiful women,” as he proudly says.

How does a man succeed in overcoming great adversities? Where does one find such strength?

Above all, when one is convinced that what he is doing is always correct, just, and legal, that one defends a humane cause, that one has never put anybody or anything in danger, and that, on the contrary, he has sacrificed everything for the common good, for people’s lives – innocent people – then those ideas themselves lend enormous force of will and persistence against all adversities and “adversaries.” The fight is just. Victory will indeed have to be sweet.

What do you recall about Ramón as a boy and young university student?

I think I am an eternal child. That’s what my wife Elizabeth, my daughters, and whoever knows me say. I don’t know if that will always be true, or if they say it through the love they show me, but I do believe I’ve never lost (nor ever will) that youthful, smiling, cheerful, and optimistic spirit that helps one so much to live and struggle. I was that way as a child: smiley and very timid, very much so, I would say. And I always was enthralled by studying and doing sports.

I remember from childhood that my little sister Laide began calling me “Papi.” I think that was because I took care of her a lot, and my mother instilled in us the idea that the family’s oldest brother is like a second father. And I think I accepted that role quite seriously, so much so that even today, many call me “Papi.” And that’s something my daughters resent, because they want to be the only ones saying that to me, but they know very well that I am the unique, the one and only “Papi,” from the soul to infinity, and that’s important.

I really enjoyed my university years. As I said, studying and doing sports captivated me, and I could do both there fully. Also I was a student assistant in statistical mathematics beginning with the second year of the course. Sometimes I gave review courses and classes to comrades in the lower years or in our own year. It’s something I always liked a lot, teaching. I could practice judo and karate in the university, which was my dream in sports. It was a period of learning, but above all of growth. It helped me a lot in my formation and in my convictions in every sense, something for which I am infinitely grateful to Cuba, to our Revolution, to our socialist system.

Do they see you as the big one of the group?

That’s one point of view of those who see me. I don’t see myself as strong, rather I work to be “considered” thin. Of course, that continually costs me much effort to believe it myself. I do sports for pleasure, also because I need to get rid of so much stress, and because I feel much better and useful after each workout. I try to keep myself healthy in spite of the heartaches, since it’s our way of fighting and overcoming, of not letting ourselves fall apart or be destroyed. Now I myself am doing weights and long walks inside the prison, some handball, a lot of chess. That makes me feel healthy, vital, and ready for everyday struggles and ones in the future that surely will come.

Who did you want to resemble?

I myself sought guidance through example from the great ones, not to be them, since it’s impossible to attain icon status. But I have greatly admired and would try to be like Che, like our immortal Antonio Maceo, like José Martí, like Fidel, like Raúl, like Bolívar, like Sucre and now a lot like our Hugo Chávez. They are in essence my everyday examples. I would be very pleased, simply, to be like every man who has decency and honor, but that would make this list too extensive.

Could you let us know what you like by way of reading – historical personalities, fiction, [even television] series…?

I am going to reduce the list to five for each category. I don’t want to bore you or be too exhaustive, but, look, among my favorite readings are: “One Hundred Years of Solitude” and “Love in the Time of Cholera,” by Gabriel García Márquez; “The Kingdom of this World,” by Alejo Carpentier: “Simple Verses,” by José Martí; and “The House of the Spirits, by Isabel Allende.

From television series I can name “In Silence It Had to Be” and “Julito the Fisherman,” two excellent Cuban productions; and from another area – adventures – where I saw “The Commandos of Silence.” And I take the occasion to ask why they don’t make new versions of all these series on Cuban television. As to films, I point to “Strawberry and Chocolate” and ‘Undercover” (“Clandestinos”), where our much-admired Isabel Santos took the lead role. In regard to fictitious characters, there are these: Don Quijote and Sancho Panza, David in “In Silence It Had to Be,” interpreted by the late actor Sergio Corrieri; “Julito the Fisherman,” immortalized by René de la Cruz; and Bruce Lee in some of his films on martial arts, to mention a few.

They arrested you when you were 35 years old. What is your concept of time?

Time is a relative concept. If I think about myself, I think time does not pass. When I think of my daughters becoming women, when I look into the eyes of my beloved Eli, time becomes infinite for me, cruel, implacable. On that score, I go back to another time, one of laughter and joys, of return and happiness, to the precious time of our future, free in Cuba – and with that (my optimism), I stop. You already know I am a huge optimist, that I am going to remain that way, and so I am happy.

Imagine you are a poet improviser and they give you a “forced foot” that says, “...I am this kind of guy.” (1)

I am this kind of guy
exactly how you see him
not right not wrong
simple, no frenzy.
With Cuba free I learned
That the way is to love struggle
And this threatening fight today
Is for the truth I knew
And I will continue being like this,
A simple guy with decency
That is worth much more than gold,
One who is honored to die as I lived.

If you close your eyes now, what do you see?

I see Cuba, a beach blue, clean, and dazzling. I see Eli, my daughters, all my family, my people. I see laughter, joy, eternity. That way I make my freedom tangible and real. And I know it’s certain.

(1) A “forced foot” (pie forzada) is a usually ten-line bit of improvised poetry that must end with a proposed verse, or as with Ramon, begin with it.