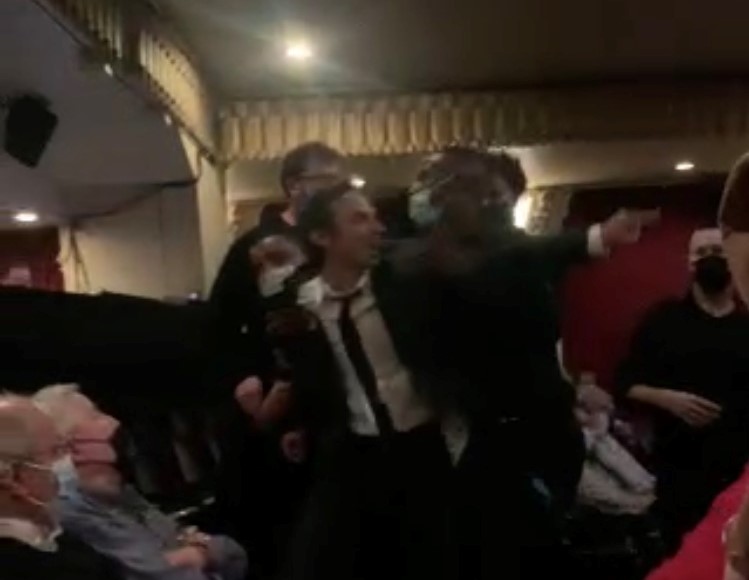 Nearly 20 years ago, in July 2002, I sat behind then-President George W. Bush as he gave a speech to my Army unit, the 10th Mountain Division. Less than a year later I was in Iraq, on Bush’s orders, as part of the US invasion.

Tonight as Bush spoke at a so-called “Distinguished Speaker Series” event in Beverly Hills--with the cheapest tickets starting at over $500--I again watched from the crowd, before confronting the event. Primarily, I demanded he apologize for the 1 million or more dead, who are only dead because of his lies and his crimes.

When George W. Bush took the nation to war in Iraq, he did so with full knowledge that Iraq possessed none of the Weapons of Mass Destruction he told the country he knew existed. He did so with full knowledge that Iraq posed no threat to the people of the United States, despite his assuring the country that it did. He did so with full knowledge that the Iraqi government had no connection to the Sept. 11 attacks, but he sold the lie that such a connection could exist. Bush manufactured consent, based on deliberate and malicious lies, to convince the nation we must go to war. And when that war, which he promised would be quick, easy and painless, blew up in the Pentagon’s face, Bush did not end it; he stop-lossed the military and ordered the disastrous “troop surge” which took death and destruction to new heights. In his own words, he said “bring ‘em on” as casualty numbers skyrocketed. As for the non-existent WMDs, Bush--instead of apologizing or admitting what he did--he instead performed a comedic skit for the 2004 Radio and Television Correspondents Dinner, where he “searched” for the weapons in the Oval Office.

Bush’s litany of crimes--from his direct authorization of illegal torture to bombing of civilians in Afghanistan--the nightmare he brought to Iraq should be considered the greatest atrocity of the modern era. Not only a flagrant violation of international law, what the Nuremberg Trials deemed the greatest crime against humanity, the illegal invasion of a sovereign nation--but senselessly led to the death, displacement and misery of millions upon millions of people. While the Iraqi people, and every American touched by the war, are still reeling and suffering from his decisions, Bush is enjoying a revival, selling books of his paintings and receiving lavish speaking fees for events like the one I attended tonight.

When I saw Bush was speaking in Los Angeles, I felt I had no choice but to find a way to do what is right by those who perished at his command.

I brought with me a list of Iraqi civilians who were killed by American forces, from the victims seen in the “Collateral Murder” video to the Nisour Square massacre. That list also included the names of US soldiers--half of them soldiers killed in Iraq, who’s family and friends then became anti-war leaders and founders of Gold Star Families For Peace; the other half, Iraq war veterans who came home and joined the anti-war struggle before succumbing to their wounds, either from injuries in Iraq that killed them years later, or who died by suicide from the scars of the war. Many of them were my friends. I did what I felt they would want me to do.

The very least of what George W. Bush can do is finally confess to what he did, apologize to everyone whose life he destroyed, especially the Iraqi people, and beg for their forgiveness. They have not known a day of peace since March 2003, and neither should he.

Names of Iraqi and U.S., war dead who Mike Prysner read out tonight while George W Bush was speaking in Beverley Hills:

Please make an urgently needed donation to the antiwar and anti-racism movement today. We can only carry on this crucial work with contributions from supporters like you.