Iraq: White House may cause the wider war it says it does not want 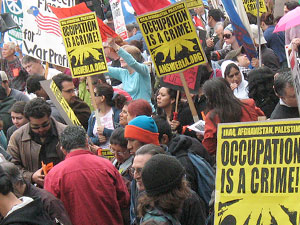 “I will not allow the United States to be dragged into fighting another war in Iraq.”
-President Obama on August 9, 2014

President Obama was likely being honest about his administration’s hopes when he made that statement. The United States government does not want to end up bogged down in a repeat of what was their most major foreign policy disaster since being defeated in Vietnam. They have preferred attempting to recoup their losses in the Iraq war through manipulative economic and political means, rather than risk another war crisis on the home front and abroad.

But President Obama was also being honest on August 29 when he said “we don’t have a strategy” in regards to fighting the Islamic State.

While the Obama administration isn’t diving into war with Iraq, they could easily slip and fall into a major regional war. And if we look at their track record in Iraq and Afghanistan, once the U.S. military is committed and they don’t accomplish their goals, that begins a long process of politicians dragging it out endlessly, even if they’ve clearly failed.

The Bush Administration very intentionally dove into all-out war with Iraq, but their imperial arrogance didn’t allow them to expect being locked into a long and bloody struggle for control that ultimately led to a military defeat.

It is easy to view the U.S. Empire as run by all-powerful people with a secret master plan — as if all developments that open the door to new U.S. military interventions (like the rise of the Islamic State) are the machinations of the hidden hand of the Empire.

While they do have a lot of secret plans, the representatives of the U.S. war machine are more accurately belligerents with no care for the human consequences. There’s not much risk for those people, since their decisions only cause others to sacrifice and suffer.

Islamic State poses a big threat to U.S. plans for reshaping the region in their interests, and they’re clearly running around in circles trying to figure out how to contain it. Obama’s admission that there is no unified plan inside the establishment shows just how high the potential is for another long and bloody U.S. military adventure.

Wars do not always start because governments want them to start. While another major war may not be the intention of the U.S. government, they could easily slide back into one based on their own mad, discombobulated drive to use guns and bombs to try to dominate the globe.

This timeline of some of the major developments over the past two-and-a-half months show how what initially began as a small, limited mission has expanded greatly, with the potential to keep snowballing:

Early June, 2014: In a surprise offensive, heavily out-numbered IS forces conquer much of northern and western Iraq as numerically superior Iraqi army units crumble. IS gains vast quantities of U.S.-supplied military equipment and hundreds of millions of dollars in cash from banks in Mosul, Iraq’s second largest city.

June 16, 2014: Three days later, Obama sends nearly 300 of the most elite, highly-trained Special Operations troops to Iraq. He just doesn’t call them troops, but “military advisers.” Most people will think of “advisers” as people in suits, not knowing that it means Special Forces soldiers. This is how the Vietnam war became a major war—first, small numbers of “advisers” (Special Forces) were sent; when they couldn’t accomplish the mission, more advisers were sent; when they couldn’t accomplish the mission, regular troops were sent, at first in small numbers; and so on…

June 16, 2014: U.S. opens the door to war planes in the Iraq’s airspace by starting to fly surveillance missions. The first steps to a bombing campaign.

June 19, 2014: Obama administration assures everyone this won’t spiral out of control like last time. It’s just a “targeted and precise military action” to “protect U.S. personnel.” The mission is described in this narrow way to calm people’s fears of another war. President Obama repeats once more: “American troops are not going to be fighting in Iraq again.”

June 30, 2014: Four days later another 200 troops added, along with Apaches and drones. As part of the announcement of authorizing another 200, Obama adds that some of those “advisers” are Apache attack helicopter and drone pilots.

July 23, 2014: At least 20 additional troops added, top general in Iraq demands more. The top “military adviser” (i.e. Army General) on the ground gave that assessment they were sent to make. He said of IS: “This is an army, and it takes an army to defeat an army.”

August 8, 2014: Bombing begins, with narrow “humanitarian” mission. Hoping nobody will object to saving innocent Yazidi civilians starving to death on a mountaintop, the public is assured that this major escalation of starting airstrikes is “only to protect these civilians and U.S. personnel.” Everyone is assured that the strikes will target IS convoys heading to commit a massacre. Just like with sending military advisers, when limited bombing can’t accomplish the mission that easily turns into more bombing in more places. And once the line is crossed, they’re committed to continuing.

August 12, 2014: U.S. military statement sets stage for broader bombing campaign with civilian casualties. Director of operations of the Joint Chiefs of Staff says “[Islamic State forces] are now starting to dissipate and to hide amongst the people. The targeting is going to become more difficult.” In just four days, what was described as a limited mission is now an open-ended, broadly-defined mission of fighting an enemy “hiding amongst the people.”

August 13, 2014: Another 130 U.S. troops authorized and deployed in what is now openly a combat mission. A month early the U.S. administration was still insisting that U.S. troops would not be in combat. As if they never made that promise to begin with, U.S. politicians casually talk of U.S. troops being involved in ground combat operations, showing that whatever promises they make can quickly change.

August 16, 2014: Purpose of the airstrikes change almost immediately, and expanded. That “humanitarian mission” that was the entire pretext for the bombing barely lasts a week before a whole new city is bombed. The vast majority of airstrikes now focused on Mosul.

August 17, 2014: Evolve the language of the stated mission. What began as bombing and troops to “protect U.S. personnel at the consulate in Erbil” quickly changed to “stopping the advance on Erbil”—which entails quite a bit more than protecting a single building.

August 21, 2014: Mission changes and expands once again. The Chairman of the Joint Chiefs of Staff announces that the U.S. must “over time” completely defeat Islamic State—the biggest commitment yet.

August 21, 2014: Washington begins public rationale for expanding bombing into Syria, raising implications of a major regional war. Top U.S. generals go on TV to explain why they cannot succeed with the new, expanded mission in Iraq without also going to war directly in Syria (another site of a country in ruins because of a failed but extremely destructive U.S. campaign). Their attempts to start bombing Syria were thwarted once already. Again, starting a bombing campaign, even limited at first, has the implications of becoming wider in size and scope—and with the main U.S. mission in Syria being overthrowing the Syrian government, limited goals of simply taking out some IS targets seem poised to expand.

August 23, 2014: Surveillance missions begin over Syria. A step towards bombing, like it was taken in Iraq.

August 26, 2014: U.S. government starts demanding its partners commit to joining their campaign. A flashback to the “Coalition of the Willing” that provided political cover for the U.S. invasion in 2003, the U.S. government signals its commitment to a major mission by soliciting help so it doesn’t look like they’re acting alone.

August 28, 2014: Another “humanitarian mission” found to again expand bombing. U.S. government uses the term “possible imminent massacre” against the Turkmen population in Baqubah, Iraq to open up bombing in yet another major city.

September 2, 2014: Another 350 U.S. troops authorized and deployed to Iraq. The ball has been rolling, and these regular troop increase announcements show no sign of it stopping.

What began as a small number of U.S. troops who would not be in combat, grew to nearly 1000 in combat in multiple cities. What began as limited bombing to “prevent a genocide” in one place expanded to bombing many places and potentially moving over to Syria. What began as a mission just to “protect U.S. personnel in Baghdad” became defeating a major military force involving multiple countries.

And that’s just in the past two-and-a-half months. The next phase could escalate even more.

It is clear that the United States government is fumbling us into what could become another endless bloodbath. Their stated rationale and plans always change, their promises are always broken, and their wanton belligerence makes anything possible.

In these moments, while the U.S. government is desperate and in disarray, that our opposition to any U.S. involvement and our refusal to fall for their false humanitarian motives can be a factor in their decisions. The administration has been very careful to tailor their comments to those who are sounding the alarm of a new Iraq war—it’s up to us to keep them fearful.

And the ocean of suffering from the last Iraq war shows just how high the stakes are.