Japan: Protests against U.S. military base in Iwakuni 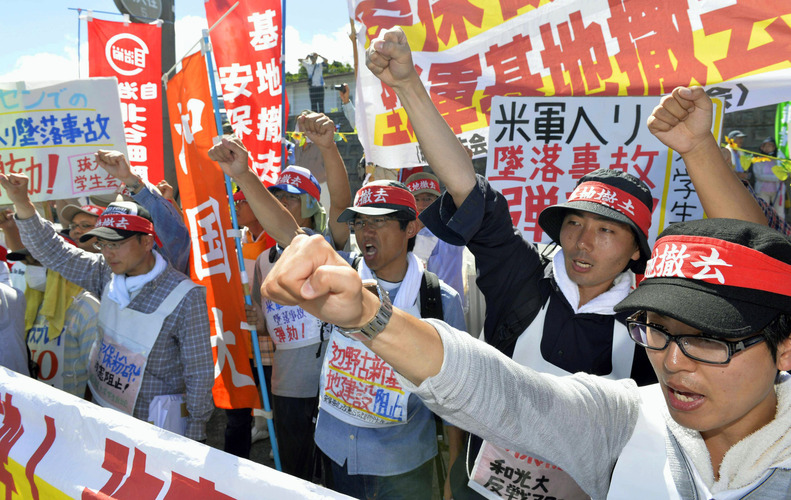 The AWC-Japan is holding its annual demonstration against the U.S. base in Iwakuni on November 25-26, 2017.

We are resisting the ongoing, massive consolidation of the base. In the context of the comprehensive realignment plan of the U.S. bases in Japan, the U.S. Iwakuni base or formally the U.S. Marine Corps Air Station Iwakuni has been consolidated intensively. It includes a massive expansion of the base, the construction of a huge U.S. military housing complex and additional deployment of the F35 stealth fighters. The U.S. and Japanese governments also plan to transfer 61 fighters from anther U.S. base in Japan to Iwakuni by next May 2018. According to the plan, Iwakuni base would become one of the largest U.S. bases in East Asia where around 130 fighters are deployed. Also, around 10,000 U.S. soldiers and their families would stay in Iwakuni, which has a population of 135,000.

The protest at the Iwakuni base also has an important meaning in the context of recent rising tension over the Korean peninsula because the base is the nearest U.S. Marine base to Korea. The base would become a major launching pad for U.S. and Japanese forces to the peninsula if an emergency happens.

People in Iwakuni clearly showed their opposition in a referendum when the consolidation plan of the base was announced by the governments of the United States and Japan in 2006. Since then, they continuously opposed the planned consolidation of the base. The AWC-Japan has held annual anti-base demonstrations since 2006 in solidarity with the struggling people of Iwakuni.

The main slogans of the program are as follows:

AWC-Japan requested that the ANSWER Coalition send a message to be read at the demonstrations:

The ANSWER Coalition is in complete support of today’s action to oppose the presence and consolidation of the U.S. military base in Iwakuni. The base is a threat to the residents of Iwakuni as well as a threat to peace in the region as a whole. It should be immediately dismantled, along with all other U.S. installations in Japan and Asia.

The Trump administration has made its hostility towards the Democratic People’s Republic of Korea well known, and constantly threatens to destroy the country. The base at Iwakuni would play a central role in any type of military operation targeting North Korea. The politicians and generals in Washington are thousands of miles away, but the residents of Iwakuni would be gravely imperiled if the U.S. government were to begin a new Korean war.

The United States is desperately trying to maintain its hegemony in Asia. Despite Donald Trump’s scattered and incoherent thinking about the world, the foreign policy and military establishment of the United States is run by professional imperialists who see China as the main threat to U.S. domination of the world. The U.S. base at Iwakuni is valuable to them not only as a tool to threaten Korea, but also as a part of the effort to encircle and contain China.

The people of Iwakuni have made their position clear year after year: The U.S. base must immediately go! In addition to the existential threat posed by the possibility of war, a stepped-up U.S. military presence will surely mean an increase in crime, violence and disruption in the lives of the city’s residents.

The people of the United States reject the policies of the hated Trump administration. We stand with you in your just struggle against the base, and pledge to continue the struggle in the United States against war and imperialism.