The following reports were written by Yoshio Nakamura of AWC-Japan, an anti-war organization on the frontlines of the struggle. 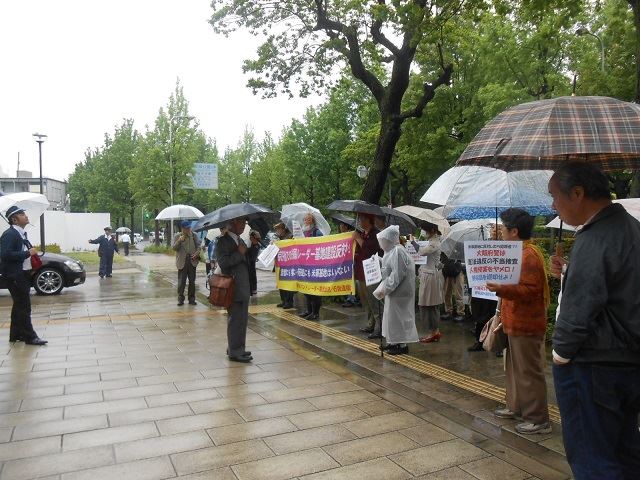 Members of the Kyoto/Kinki Coalition against the U.S. X-Band Radar Base held a protest in front of the headquarters of the Osaka prefectural police this afternoon, denouncing the latest repression against the organization.

On May 2, 2016 the Osaka prefectural police raided 11 houses of activists and five offices simultaneously. Most of them are related to the people’s movement against the U.S. missile radar base in Ukawa, Kyotango City, in the northern part of Kyoto. The U.S. base was built on 2014 and is playing an important role of the U.S. missile “defense” system in East Asia.

According to the search warrant, the reason of the search is an “alleged fraud” (!). Moreover, surprisingly, the warrant did not show any alleged facts of crimes concretely. Police might make a false story but we can easily understand that this is just political repression. It follows the last instance of police repression in June 2015. At the time, three activists were arrested and 14 places were raided due to false charges of allegedly violating the ‘Road Transportation Law,’ but the charges were soon dropped.

The Kyoto/Kinki Coalition against the U.S. X-band Radar Base plan to hold an anti-base demonstration in Ukawa on June 5. Any repression can never break down people’s will for peace. We shall win! 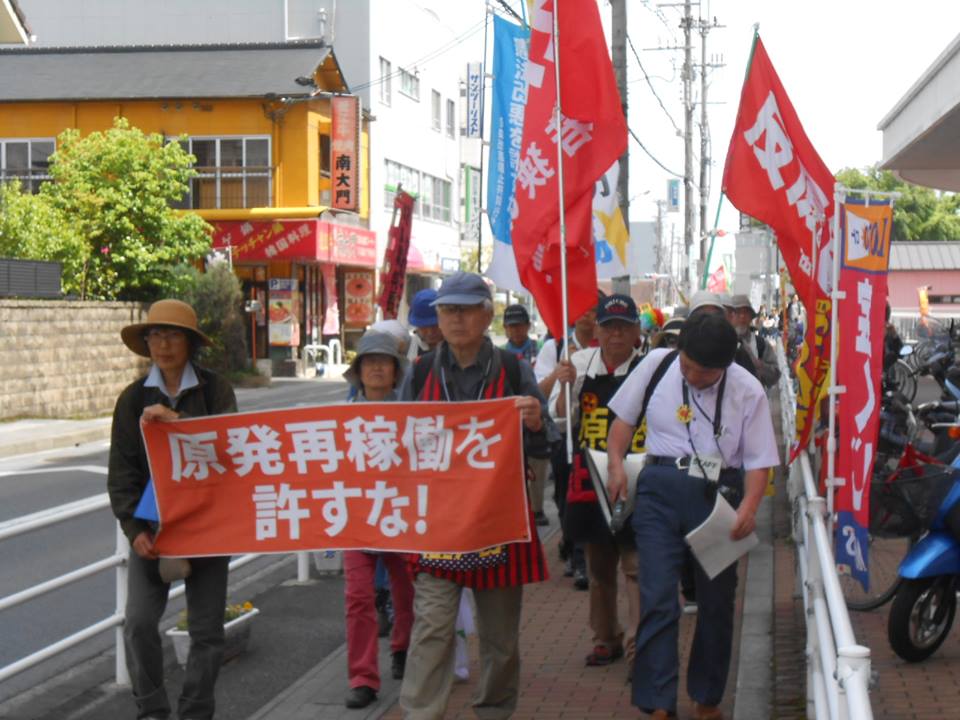 Today is the last day of the anti-nuke relay march around Biwako Lake in Shiga prefecture.

Biwako Lake is the biggest lake in Japan and has supplied water to households of whole Kansai region. But the lake is located only 30-80 km away from reactor zone in Wakasa Bay, Fukui prefecture. Tremendous damage would be brought through water contamination if a nuclear accident would happen.

People marched on the streets along the lake, demanding the immediate shut-down of all nuclear power plants and a stop to reactor restarts. 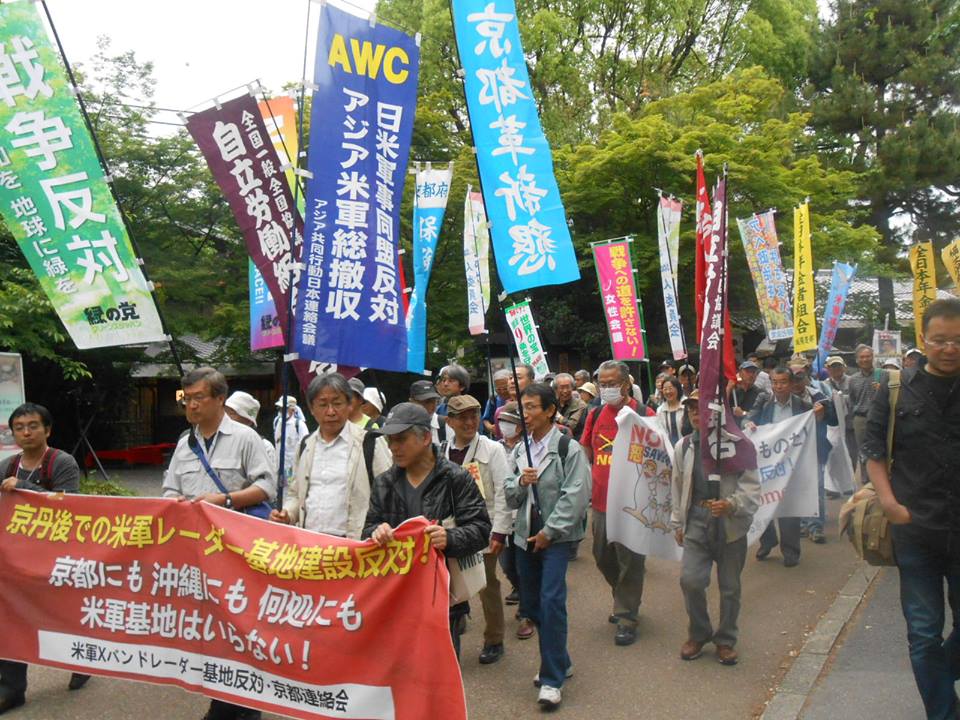 Today is the 69th anniversary of the enforcement of the present Japanese Constitution in 1947.

Article 9 of the Japanese Constitution declares as follows:

“(1) Aspiring sincerely to an international peace based on justice and order, the Japanese people forever renounce war as a sovereign right of the nation and the threat or use of force as means of settling international disputes.

"(2) In order to accomplish the aim of the preceding paragraph, land, sea, and air forces, as well as other war potential, will never be maintained. The right of belligerency of the state will not be recognized.”

It is very clear that the Abe administration’s new security laws, which were forcibly enacted in September 2015, violates this article.

People marched on main streets in Kyoto, demanding the repeal of the new security laws and the stop of the government planed amendment of Article 9 itself. Similar rallies were held in many cities in Japan today. 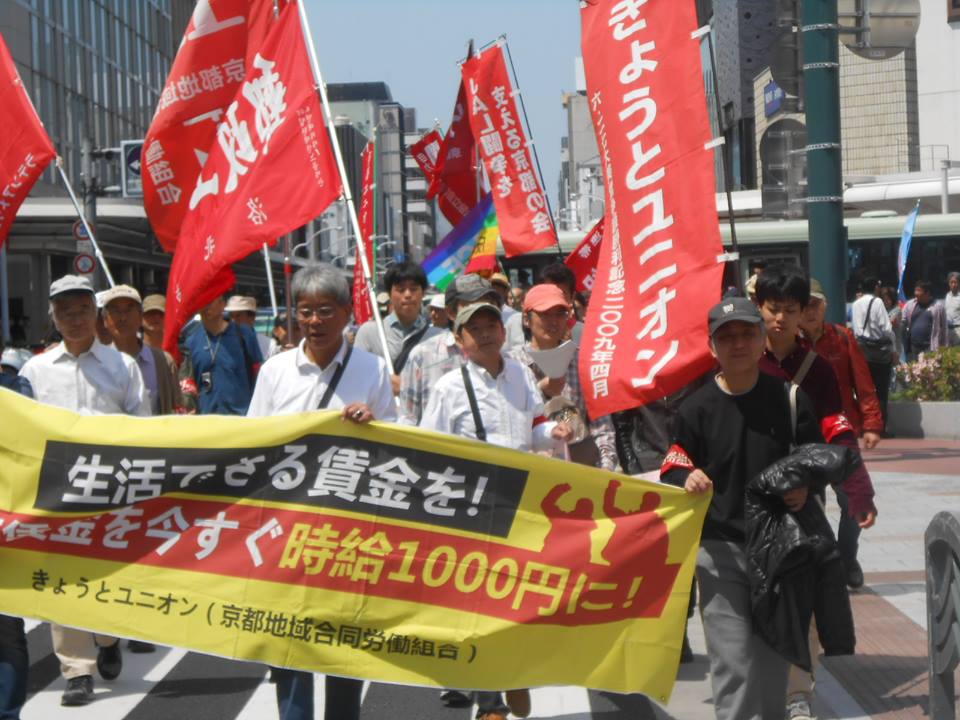 The Union Network Kyoto, a local alliance of progressive labor unions in small and medium scale companies, held a demonstration celebrating of the International Workers Day.

The workers also demanded an end to nuclear restarts, the repeal of the Japan’s ‘war laws’, an end to the construction of the new U.S. base in Henoko, Okinawa, and the stop to the government’s plans to amend the peace article of the Japanese peace constitution.

During the rally, they vowed to work hard to oust the Abe administration that is pushing through neoliberal policies and war drives.

We, the working class in Japan, are the ones with the workers and people of the world in the struggle against neoliberalism and imperialist war drive, and for genuine social change.