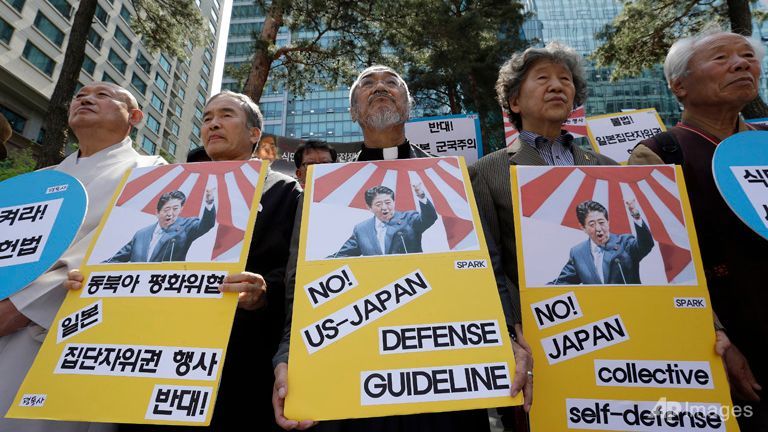 We, the people in the Asia-Pacific region, oppose Japan’s remilitarization that has rapidly grown under the Abe administration. We demand to scrap the new security bills that are being debated in the ongoing Japanese Diet session.

The new security bills, which the Abe administration submitted to the Japanese Diet on 15 May 2015, are composed of the newly established ‘International Peace Support Bills’ and the amendment of existing 10 security-related laws. Through them, the Abe administration tries to make a historical change in Japan’s security and defense policy. Abe aims to abandon the ‘Defense Only’ policy finally, and turn Japan into a state that is able to carry out wars of aggression and military intervention abroad along with allied countries led by the United States, in the guise of exercising the Right of Collective Self-Defense.

The bills are a reflection of the will of the Japanese ruling class that has pursued the establishment of a military posture that will enable Japan to send their own forces anytime and anywhere they need. It clearly violates Article 9 of the Japanese Constitution that declared the 'renouncement of war', 'non-maintenance of war potential forces' and 'denial of the right of belligerency'. The Abe administration aims to change Article 9 itself within the next few years, following the establishment of new security legislation.

At the same time, Japan’s new security legislation would serve the U.S. military strategy that promotes military ‘rebalancing’ toward the Asia-Pacific region. On 27 April 2015, the U.S. and Japanese governments amended the ‘Guideline for the U.S.-Japan Defense Cooperation’ again. It has developed the joint operation plans which would be carried out by both the U.S. and Japanese forces on the premise of Japan’s exercising the Right of Collective Self-Defense. The new security bills will provide legal basis for those possible joint military operations.

The Abe administration has described China and the DPRK as ‘regional threats’ in order to get public support for the new security bills. But in reality, the U.S. rebalancing strategy and Japan’s remilitarization is the main factor of the rising political and military tension in the region. Japan continues to play its role as a junior partner of U.S. imperialism, with its military forces supporting the U.S. pivot to Asia. The United States and Japan have started joint military exercises with the Philippines and are contemplating having military bases in the future as well as a Japan-Philippines Visiting Forces Agreement.

In the past century, Japanese imperialism had brought about tremendous sufferings to many people in the region by its colonialization, occupation and war of aggression. The Abe administration, however, tries to revise the historical fact and glorify the Japanese imperialist history of aggression. Prime Minister Abe himself and his cabinet members’ visit to the Yasukuni Shrine clearly showed their imperial ambitions. We strongly oppose the new security bills that such persons are promoting. What the Japanese government should do is not to promote remilitarization but to immediately implement official apology and state compensation to the victims of Japan’s aggression.

We support people in Japan who have surround the Diet building to stop the passage of the new security bills. At the same time, we fight together to further expand the voice and actions of people in the Asia-Pacific region to oppose Japan’s remilitarization and consolidation of the U.S.-Japanese military alliance.