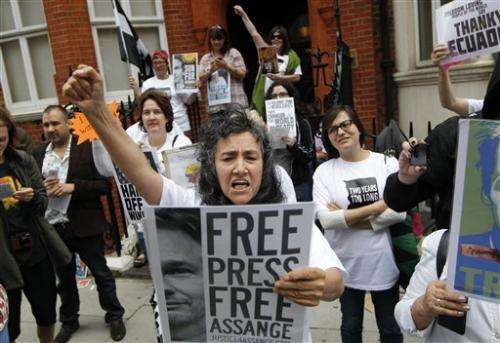 Wikileaks founder Julian Assange's arrest by UK authorities on behalf of the United States is a craven attempt by the Pentagon war machine and the rest of the imperial establishment to silence one of their most prominent critics. As we have since the persecution of Assange and Wikileaks began, the ANSWER Coalition will be joining with other anti-war and pro-transparency activists across the country to mobilize and demand that the U.S. government end its campaign against this vital alternative media outlet.

Since its founding in 2006, Wikileaks has been a persistent thorn in the side of U.S. warmakers and facilitated several historic leaks of information that had massive significance on a global scale. One was the release of the "collateral murder" video that showed a U.S. helicopter crew callously gunning down Iraqi civilians in 2007, further exposing the murderous nature of the U.S. occupation of that country. In July 2010, Wikileaks released 92,000 documents from the years 2004-2009 regarding the war in Afghanistan that would become known as the Afghan war logs. In November 2010 Wikileaks published hundreds of thousands of U.S. "diplomatic" communications, exposing the strategic thinking of the officials charged with ensuring U.S. hegemony over the globe.

Corporate media outlets were more than happy to use the information secured and released by Wikileaks as material for their own articles and reports. However, many of these very same outlets are now slandering Julian Assange as a criminal and a spy, once again mindlessly echoing the talking points of the Pentagon.

The true motivation behind U.S. wars are economic plunder and political domination, but the government has to hide behind noble causes like human rights and democracy to conceal their true aims and make their acts of aggression more palatable to public opinion. Julian Assange's journalism punctures those lies. Now more than ever the anti-war movement and all progressive people need to rally to his defense.