Juneteenth March and Rally for Liberation 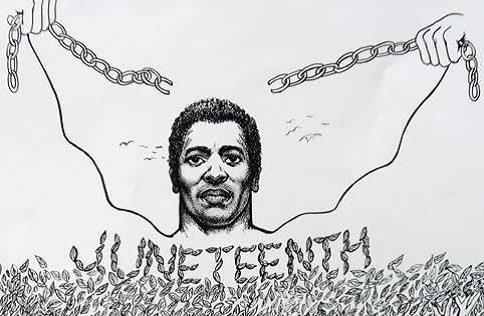 Endorsed By: ONE DC, DC Jobs or Else, Operation Beloved Communities, ANSWER Coalition, Students Against Mass Incarceration, and more...

Juneteenth is the oldest known holiday celebrating the end of slavery in the United States. On June 19th, 1865 Union soliders landed in Galveston Texas, where slaves had not heard of the Emancipation Proclamation, that they were free. Freed slaves combined “June” and “nineteenth” to create “Juneteenth,” which became a significant holiday in Texas. Juneteenth spread rapidly around the country during the Civil Rights Movement. In particular the Poor Peoples Campaign of 1968 held a massive demonstration on Juneteenth 1968 which helped energize Juneteenth as a national holiday. We come together on June 22, 2013 to celebrate this important date in Black history, and continue its spirit of resistance!

Despite tremendous wealth in the city Washington D.C. has a serious jobs crisis. While the city’s overall unemployment rate is 8.5%, in areas like Wards 7 and 8 the official average is closer to 20%. For those with criminal records unemployment sits at roughly 50%. The other 50% of those with criminal records are restricted to just a few low-income job categories. This fits in more widely with the District’s poverty rate of 18.7% overall, and 30.3% for children. Not surprisingly in 2011 D.C. had the biggest gap between rich and poor of any other state in the U.S.

Affordable Housing for All!

In the last 10 years D.C. has lost over half of its low-cost rental units and 72% of its low-value homes. The typical person with a low-income paid 63% of their income towards rent. Average rent on a one-bedroom apartment has jumped from $735 in 2000 to 1,100 in 2010. In the same period the price of homes has jumped 50%. The cities public housing waiting list, now closed, has an estimated wait time of 28 years!

Quality Schools in Every Neighborhood!

For years the public schools in the District of Columbia have not been up to the task of delivering a quality education for every child in every neighborhood. In a recent study of test scores from 2007-2011 the authors found that there was no meaninful rise in 3rd grade reading or math scores. It also found that low test scores almost always seemed to cluster in the poorest neighborhoods. City leaders have been far too dismissive, pushing a range of options that abandon quality neighborhood education, and mostly ignore the tight links between poverty and learning. Instead they push privitization and school closures in the poorest, lowest performing neighborhoods. The result has been progress far below that promised by city officials, and higher profits for city real estate interests and private education companies who have benefited from closed schools.