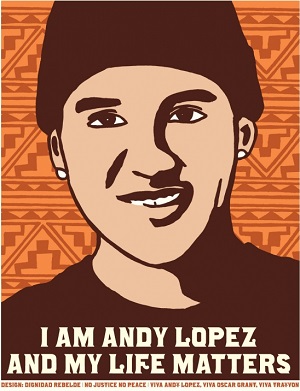 Saturday, Nov. 9 will be a National Day of Action demanding Justice for Andy Lopez Cruz, the 13-year-old boy who was shot and killed by Sonoma County Sheriff’s deputy Erick Gelhaus, on Oct. 22. The killing has sparked an unprecedented wave of mass protests in Santa Rosa. On Nov. 4, the Lopez Cruz family, represented by attorney Arnoldo Casillas, filed a lawsuit against Sonoma County and Gelhaus.

Rallies, marches, speakouts and other actions will be taking place in many cities across California and around the country on Nov. 9, including:

The following article was posted to the ANSWER Coalition's website on Oct. 31.

Thousands of people—the overwhelming majority of them Latino youth—took to the street of Santa Rosa, Calif., on Oct. 29 to protest the police killing of a 13-year-old boy. It was one of the largest demonstrations in Santa Rosa’s history.

On the evening of Oct. 22, 8th grade student Andy Lopez was walking through a field in Santa Rosa to a friend's house. He was going to return his friend's plastic BB gun that he had borrowed. Two Sonoma County sheriff's deputies stopped their car and one of them screamed at Lopez to drop his gun. Lopez started to turn around to face the deputies when one of them shot him seven times, killing him. Ten seconds transpired between the moment the deputies stopped their car and the first shot that was fired at Lopez. The autopsy demonstrated that some of the bullets hit Lopez in the back, before he had fully turned around to face his killer. After the shooting, the deputies handcuffed Lopez's body and evacuated the scene for several hours. Lopez was killed on the National Day of Action Against Police Brutality.