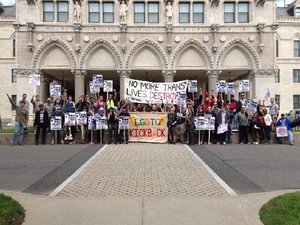 Jane Doe, as she is known because she is a minor, is a transgender Latina teenager who has, in recent months, become a symbol of struggle against mass incarceration, racism, transphobia, victim-blaming and child abuse all in one. People across the country and even overseas have stood up to demand that she be released from York Correctional, an adult women’s prison, where she was placed by Connecticut Department of Children and Families Commissioner Joette Katz and has now been held for two months in solitary conditions.

Why did DCF imprison Jane?

In her court affidavit, Jane Doe details the abuse she has undergone at the hands of DCF staff and people DCF has placed her with. Jane has undergone unimaginable horrors and undoubtedly has a great deal of trauma to recover from. She reacted the way any abused person would to their abusers, defending herself when her life was threatened again.

Jane’s choice to stand up for herself was threatening to DCF Commissioner Katz. CT DCF has been under federal oversight for around 20 years because of previous abuses of children, and Katz did not want DCF’s neglect and abuse of Jane to become a reason for reinstatement of that oversight. She stood before a choice – to vet her own department and be held accountable for the horrors transpiring in it, or to blame the victim and make sure everyone saw Jane as a monster who could not be believed. Katz chose to let Jane suffer more to protect DCF’s reputation.

Despite having requested millions for the creation of a higher-security lockup for “violent” teenage girls – using Jane’s case as pretext – Katz painted Jane as a violent monster who could not even be contained by that facility. Under 17a-12, an obscure statute that had only been used once before, she had Jane placed at York and entered an additional request that Jane be transferred to Manson, a high-security men’s prison.

DCF hopes that by demonizing Jane Doe they can eliminate the chance of her getting supporters. The exact opposite has been true. Feminists, LGBTQ communities and organizations, activists against racism and mass incarcerations, parents and youth have stood up to demand justice for Jane. We recognize that the mistreatment of Jane can be ascribed largely to her gender identity and nationality, because of which she is painted by the state as both exceptionally dangerous and exceptionally disposable. Jane Doe’s supporters include prominent trans and prison reform figures like CeCe McDonald, Laverne Cox, Janet Mock and Piper Kerman.

Join the campaign to demand justice

Fighters for Jane Doe’s freedom have engaged in a massive campaign to demand her immediate release and placement into a safe, therapeutic home. A growing online presence, as well as a series of actions in Hartford – Connecticut’s capital and home to the DCF headquarters – have had an impact, forcing a response from Connecticut Governor Dannel Malloy.

WORD firmly joins the growing sea of voices demanding justice for Jane. An injury to one is an injury to all!

To get involved in Justice for Jane, visit the following links: