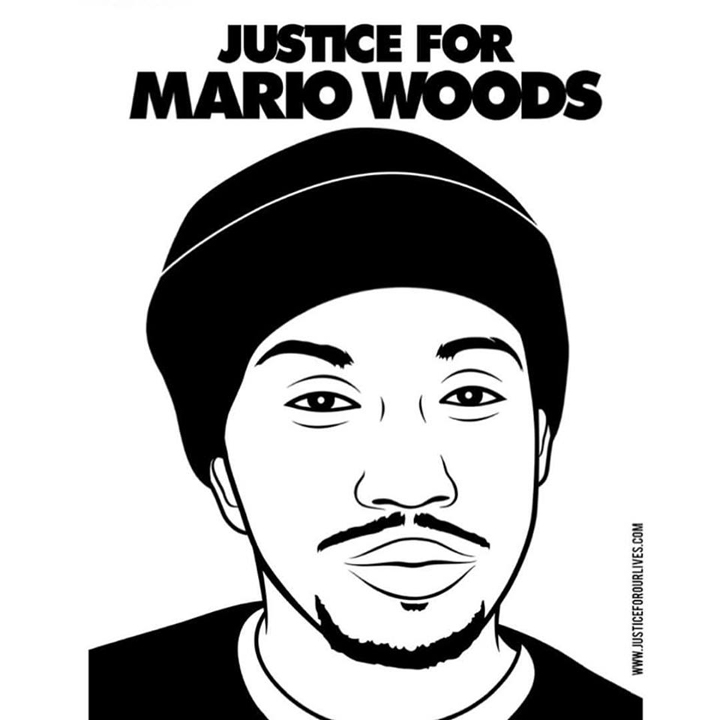 In 2004 Mario Woods made a short documentary film where he “examines the lack of resources in Hunters Point and its contribution to the overwhelming amount of violence that is currently taking place.” Eleven years later, in the very same Bayview Hunter’s Point district of San Francisco, Woods was executed by a San Francisco Police Department firing-squad of at least five officers who shot dozens of rounds at him from a few feet away.

Multiple videos of the murder have surfaced online and been shared widely. The killing has sparked justified outrage at a time when videos of murderous police terror have become commonplace in the mainstream news, forcing the issue into many people’s consciousness and heightening the struggle around it.

After the videos surfaced, a vigil was held to celebrate the life of Mario Woods at 3rd and Gilman in the Bayview district, where hundreds of people gathered to honor Woods and be a part of the movement calling for justice.

Black Lives Matter Bay Area organizers took to the mic to give the community perspective on the killing. Rheema Calloway of BLM Bay Area stated, “We are here because there is a war against Black bodies here in San Francisco. It is a war that we’ve been fighting to where we only represent three percent of the population…There is no coincidence that the same time Mario was killed they were having a budget meeting about rebuilding the San Francisco police jail, and all that we represent, three percent of the population here in San Francisco, we are filling the jails, fifty-six percent. It’s no coincidence…We live in a city that does not care about the Black population. They don’t care about the homeless population…they’d rather increase the police to protect the new properties and the new families that are coming here. What about the people that have been in the Bayview for years?...We have supervisors and people in the city that should be ashamed of yourselves. The only reason why you come to the city right now is that people are dead…As a community we need to organize ourselves. City Hall is not gonna do it for us.”

Ronnishia Johnson of Black Lives Matter Bay Area echoed the theme of gentrification, saying, “What I want us to think about is that what happened to this young brother yesterday is a direct product of gentrification. We don’t often think about how the over-policing in our neighborhoods…stopping, frisking, harassing young Black men and the blatant murder of Black people in general is linked to these larger issues and systems of oppression.” 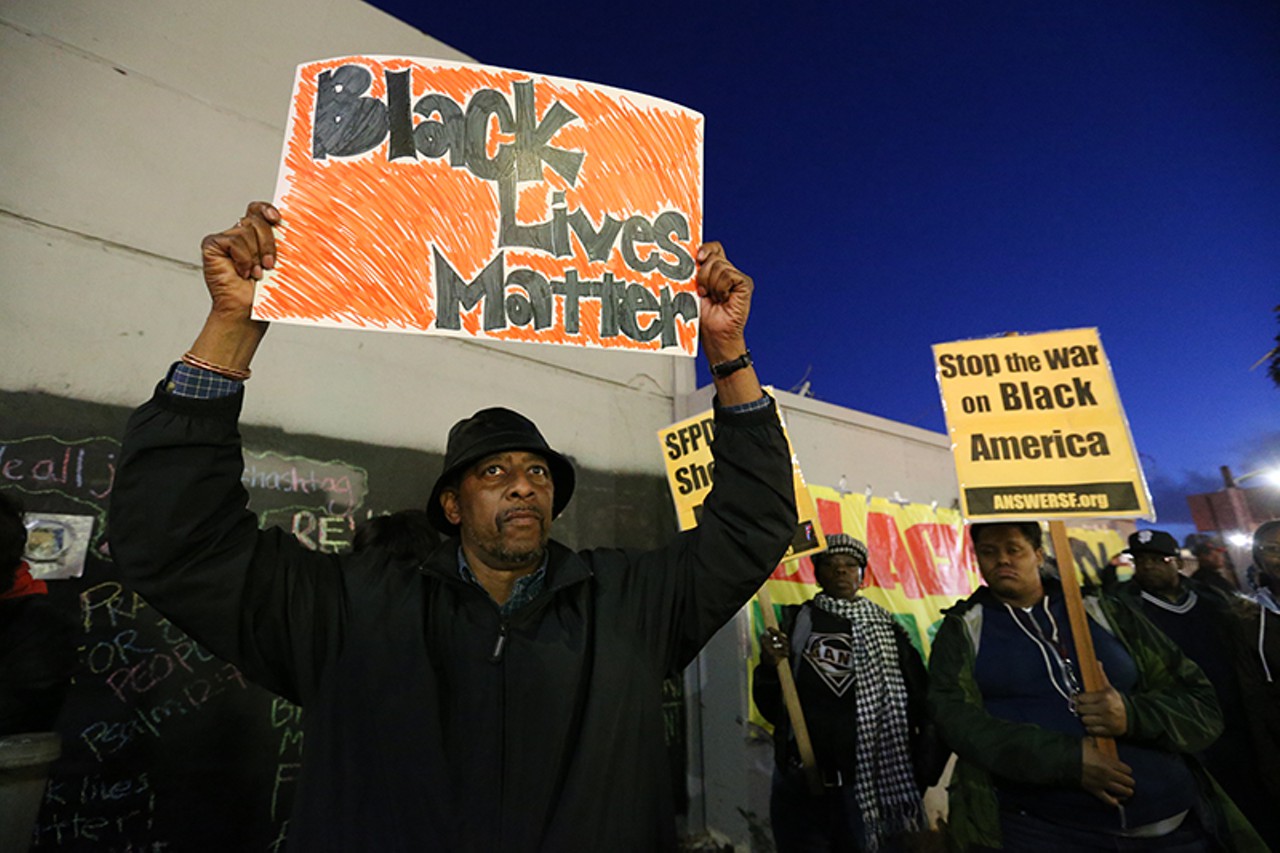 The community and family of Mario Woods immediately understood that the tactics of SFPD would be to demonize Woods and attack his character, in order to create a false narrative of officers fearing for their lives. Mario’s cousin Jeff spoke about these shameful tactics. He commented, “I’ve seen the post they put up about how he had a gang injunction. Fuck that gang injunction. Once you get put on that list you can’t get off it…All you gotta do is be hanging out on the street and they’ll slap you with a gang injunction. He was not a gang member. He hung out with people, oh well. I hang out with people. Everybody hangs out with people. That don’t mean you’re a gang member…All y’all seen that video, he was walking away, and I know him, I know why he was walking away. He just wanted to get away out of that situation. He wasn’t trying to hurt no police, he wasn’t trying to walk toward no police or be aggressive to nobody. He was probably trying to find someone he knew around here to help him get out of that situation.”

The ANSWER Coalition was among other organizations in solidarity that then joined the Bayview community in a march from the site of the vigil to a nearby church, where a town hall meeting was held with Woods’ family, his attorneys, and representatives of faith groups that spoke.

The next day, SFPD held a town hall meeting in the Bayview to unapologetically confront the community and justify their racist terror. Police Chief Greg Suhr has gone in front of multiple Bay Area communities to spew lies about the victims of police murder, and his actions can only be understood in the context of capitalist white supremacy that his badge-wielding thugs enforce in San Francisco. Earlier this year, Suhr fabricated details of the murder of Amilcar Perez-Lopez in the Mission by undercover SFPD officers. In 2014, he made the same case for the police murder of Alex Nieto in Bernal Heights.

At the town hall on December 4th, Suhr presented a blown-up photo of a table knife and three still photographs of Mario Woods hunkered against a wall, to come to the absurd conclusion that he posed an imminent threat that could not be stopped.

The people were not fooled by Suhr. He was shouted down for his lies throughout the meeting and speakers made a point to show that there will be militant people-powered fightback against this blatant act of terrorism.

Clarence Thomas, a representative of the International Longshore and Warehouse Union Local 10, told the crowd that the ILWU will be shutting down Bay Area ports on May Day 2016 as a national day of mourning for the lives lost to police murder. He elaborated, “When we had our last shutdown on May 1st, the police were very indignant, because they took exception to us referring to the killings of innocent Black people as the police reign of terror. Do you think that Mario Woods’ mother and family feel any different than the people who were killed in San Bernardino?”

Mario Woods’ execution happens at a point in time where terrorist acts by groups like ISIS are being used by capitalist ruling classes around the world to increase mass surveillance, violently repress dissent, and justify endless war, while the terrorist acts of white supremacists on Planned Parenthood clinics, Black and Muslim centers of worship, and poor and oppressed people in general go overlooked as individual cases where mentally-ill “loners” lash out.

President Obama has appeared on television in the wake of the Paris attacks and the mass shooting in San Bernardino to tell the public that the United States will not be terrorized. When he says this, what he means is that the interests of the capitalist ruling class will not be threatened. Poor, working, and oppressed people are terrorized on a daily basis. If the so-called “War on Terror” was a campaign waged from the ground up by the people, then it would be capitalist cronies like Greg Suhr and Ed Lee that would be imprisoned after being tried for their crimes against the people.

Increasingly, video evidence is being leaked to the public that reveals the police to be organized terror groups that serve as occupying and gentrifying forces in our communities. They are gangsters for capitalism. They are servants of the political ruling class and the corporate interests behind them, and their loyal mouthpieces are people like Chief Suhr and San Francisco Mayor Ed Lee.

In light of the execution of Mario Woods, the Justice For Mario Woods Coalition has formed to lead this struggle. The Coalition is a strong fighting force made up of community members and social justice organizations whose demands are the firing of Chief Greg Suhr, murder charges for the officers who executed Mario Woods, and that a truly independent investigation must take place.

The ANSWER Coalition is a member organization of the Justice For Mario Woods Coalition, and asks everyone to join us in building a movement that is capable of seizing justice through the dedicated struggle of the people!

Contact us by email ([email protected]) or phone (415-821-6545) and continue to check out our website for further updates and actions!