Oct. 10: Justice or Else! National demonstration in Washington, D.C. 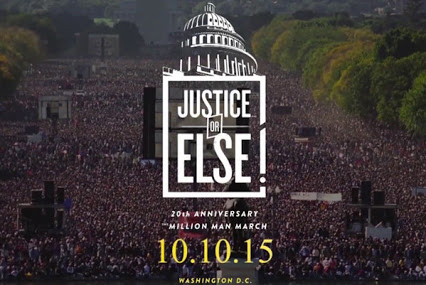 The ANSWER Coalition will be mobilizing for this demonstration. To contact our D.C. office, call (202) 265-1948 or email [email protected]. The following information was originally posted on the official website of the Justice or Else! demonstration.

On October 10, 2015 in Washington, D.C., at the National Mall, The Honorable Minister Louis Farrakhan will convene the 20th Anniversary of the Million Man March under the theme: Justice or Else!

The widespread death, rising racism, mob attacks and police brutality on Blacks coupled with economic deprivation and stark poverty, requires that something must be immediately done to address and correct the condition.

Our Native American brothers and sisters often live in abject poverty and are fighting to keep the little land that they have from the hands of a duplicitous U.S. government and corporate liars and thieves.

The Latino community is subjected to scrutiny, mistreatment and disrespect. Women struggle for full recognition of their value and their worth. Soldiers who have served their country in ill-conceived wars and conflicts based on lies, return home to be ignored and their broken bodies and minds left unattended. Even the poor Whites of this nation have no voice as a cruel oligarchy rules on behalf of a small group of individuals.

The failure of the U.S. Government to give justice to its former slaves require that we present ourselves in unity to make the demand for Justice or Else!

The longer justice is denied the more intense will be the cry. The anger that is in the breast of the people will continue and as the pain continues to intensify, if our cry for justice is not heard soon, then these demonstrations and protests in cities across the country and the world will produce a tsunami the results of which will bring about total chaos and destruction on all sides.

The demonstration will demand: