Since this article was published, delegates from North and South Korea held a January 9 meeting to confirm the North's participation in the Olympic games hosted by the South. 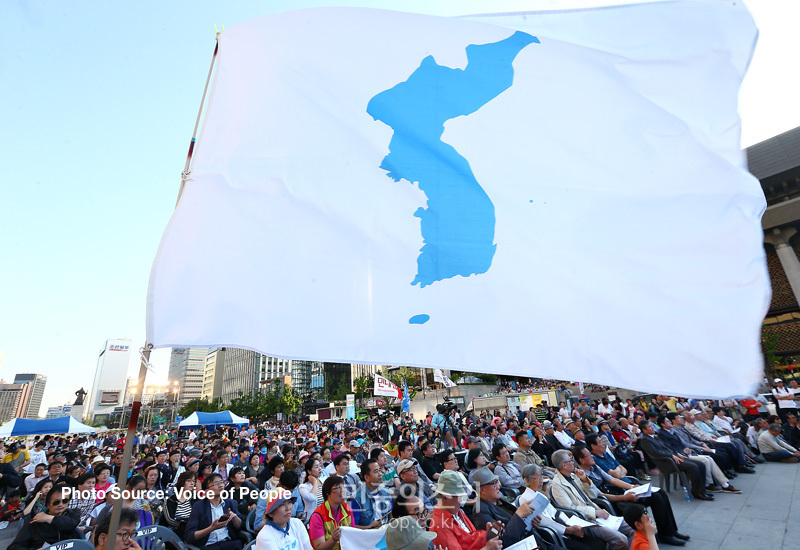 “2017 was a year of heroic struggle and great victory,” said North Korean leader Kim Jong-un as he began his 2018 New Year’s Day address, much anticipated by North Korea watchers around the world. His country, he said, has accomplished the cause of “perfecting the national nuclear forces” and “at last come to possess a powerful and reliable war deterrent, which no force and nothing can reverse.” He then quickly moved on to discuss two other topics in great detail: the country’s five-year plan for economic development and the need for reconciliation between North and South Korea toward national reunification.

Two things stand out in Kim’s speech. One, North Korea looks back at 2017 as a year of struggle between itself in its drive to complete the construction of an effective nuclear deterrent versus the United States, determined to stop this from happening. And Kim Jong-un has effectively just said, “I win.” North Korea successfully tested what it called a hydrogen bomb in September 2017, then the Hwaseong 15, an intercontinental ballistic missile, in November 2017. Despite the Trump administration’s retaliation, including unprecedented UN sanctions and military exercises, Kim declared in his recent speech, “Our country’s nuclear forces are capable of thwarting and countering any nuclear threats from the United States, and they constitute a powerful deterrent that prevents it from starting an adventurous war.”

Two, having gained confidence in its ability to defend itself from U.S. aggression, North Korea appears ready to move onto other important matters, like building its economy and improving relations with the South—two things that will likely be North Korea’s priorities this year.

Kim’s New Year address goes into minute detail about the country’s goals in all aspects of its economy, such as the metal industry, the chemical industry, agriculture, and light industry. The western media overlooks this section of the speech, perhaps because it appears to be about domestic affairs that don’t concern the west. But for North Korea, building a self-reliant economy is critical in its fight against U.S. aggression.

How is North Korea able to withstand so many years of sanctions and resist collapse? The only answer that western mainstream pundits can muster is China: “Surely, it’s because China is not doing enough to isolate North Korea.” But the real answer is in Kim’s speech, which outlines in great detail how to make all aspects of the country’s economy self-reliant: how to, for example, train and support scientists so the country can use its indigenous resources and know-how to build an economy independent from foreign powers.

If 2017 for North Korea was a year of struggle to complete its nuclear force to deter U.S. military threats, 2018, it seems, will be a year of struggle to undermine the power of U.S.-led sanctions—not through compromise and negotiations but, as Kim says in his New Year address, by concentrating “all efforts on consolidating the independence and Juche character of the national economy.”

Among the economic development goals outlined in Kim’s address are:

“The United States and its vassal forces and their desperate manoeuvres to ignite a war” are obstacles to national reunification, according to Kim Jong-un. And although the previous conservative administration in South Korea was ousted and replaced by another, thanks to the massive resistance of the South Korean people, he noted, “nothing has been changed in the relations between the north and the south.” On the contrary, he said, South Korean authorities are siding with the United States in its hostile policy towards North Korea and he seeks to “put an end to this abnormal situation.”

Kim then made two important overtures to South Korea. He declared North Korea’s doors open “to anyone from south Korea, including the ruling party and opposition parties, organizations and individual personages of all backgrounds, for dialogue, contact and travel.” As for the Winter Olympic Games, he said, “We earnestly wish the Olympic Games a success and we are willing to send a delegation and the authorities of the north and the south may meet together soon to discuss this.” South Korean President Moon Jae-in has always wanted the Winter Olympics in South Korea in February to be an opportunity to showcase North-South unity and had repeatedly requested the North’s participation in the upcoming games.

Kim’s speech seems to indicate that with new found confidence in its ability to defend against U.S. aggression, North Korea is now ready to prioritize engagement with the new administration in the South. But its offer of detente is not without conditions. South Korea should, said Kim, “discontinue all the nuclear war drills they stage with outside forces” and “refrain from any acts of bringing in nuclear armaments and aggressive forces from the United States.” This echoes the spirit of the June 15 North-South Joint Declaration, signed by former leaders Kim Dae-jung and Kim Jong-il in 2000—which states the question of Korea’s reunification should be resolved “independently and through the joint efforts of the Korean people.” (Read: Without the United States.)

At Moon Jae-in’s request, the United States agreed today to delay the joint military exercise that normally takes place in the Spring to avoid a flare-up of military tension during the Olympics. On Wednesday, North and South Korea reopened a communication channel in the truce village of Panmunjeom after it had been shut down for two years since ousted South Korean President Park Geun-hye unilaterally closed down the inter-Korean industrial zone in Kaesong in February 2016.

Rather than celebrating recent developments as breakthroughs toward peace, U.S. pundits were quick to pooh-pooh them. If South Korea “runs off the leash,” said Daniel R. Russel, former Assistant Secretary of State for East Asian and Pacific Affairs in the Obama administration, to the New York Times, “it will exacerbate tensions within the alliance.” He added, “It is fine for the South Koreans to take the lead, but if they don’t have the U.S. behind them, they won’t get far with North Korea.”

Republican Senator Lindsey Graham tweeted the United States should skip the Winter Olympics if North Korea attends: “I’m confident South Korea will reject this absurd overture and fully believe that if North Korea goes to the Winter Olympics, we do not.” Scott Snyder of the Council on Foreign Relations chimed in and called Kim Jong-un’s offer of detente a “trap” in The Atlantic: “Now [Moon Jae-in] faces the added problem that his own near-term political goals could trap him into concessions that might weaken South Korea’s alliance with the United States.”

Why is the prospect of peace in Korea so threatening to those vested in maintaining the US-ROK alliance? U.S.’ alliance with South Korea—and Japan—is critical to its strategic interests in Asia, a region that the previous administration had identified as the center of this century’s global economy in its “pivot to Asia” doctrine. In Northeast Asia, the United States has invested billions of dollars to construct a trilateral missile defense system with South Korea and Japan to curtail China’s power in the region. To U.S. military strategists, South Korea, with a ‘real live enemy’ to its north, provides an ideal training ground for its forces, which routinely conduct massive exercises that simulate real war scenarios and involve tens of thousands of troops from the region as well as the continental United States.

South Korea is also among the top purchasers of U.S. weapons, a major source of earning for the United States. In the past decade, the United States sold more than $30 billion worth of weapons to South Korea. For the U.S. military industrial complex, a divided Korea perpetually threatened by war is a bonanza. And the continued division of the peninsula is critical to keep it that way. In short, what the United States seeks, in the name of the “US-ROK alliance,” is to turn the Military Demarcation Line that separates North and South Korea into a permanent border. Even as Moon and Kim take cautious steps to resume North-South contact, we can be sure that the wheels are already turning in Washington to undermine this effort.

Former human rights lawyer Moon Jae-in has said he wants South Korea to be “able to take the lead on matters on the Korean Peninsula.” 2018 will be a test of his determination to see his vision through. The South Korean people, who, just one year ago, took to the streets in the bitterest winter months to say, “Basta ya!” accomplished something no one had previously imagined possible: the ouster of the dictator’s daughter, Park Geun-hye. They can, once again, achieve what had once seemed out of reach by pressing the Moon Jae-in government to fulfill his vision—use the Winter Olympics as an opportunity for a breakthrough toward lasting peace and national reconciliation in defiance of the U.S. military industrial complex. To that end, peace and anti-war forces in the United States, too, need to press their own government to give South Korea the room to chart its own course.