From Zoom In Korea: Korean Americans Call for Peace Beyond Olympics 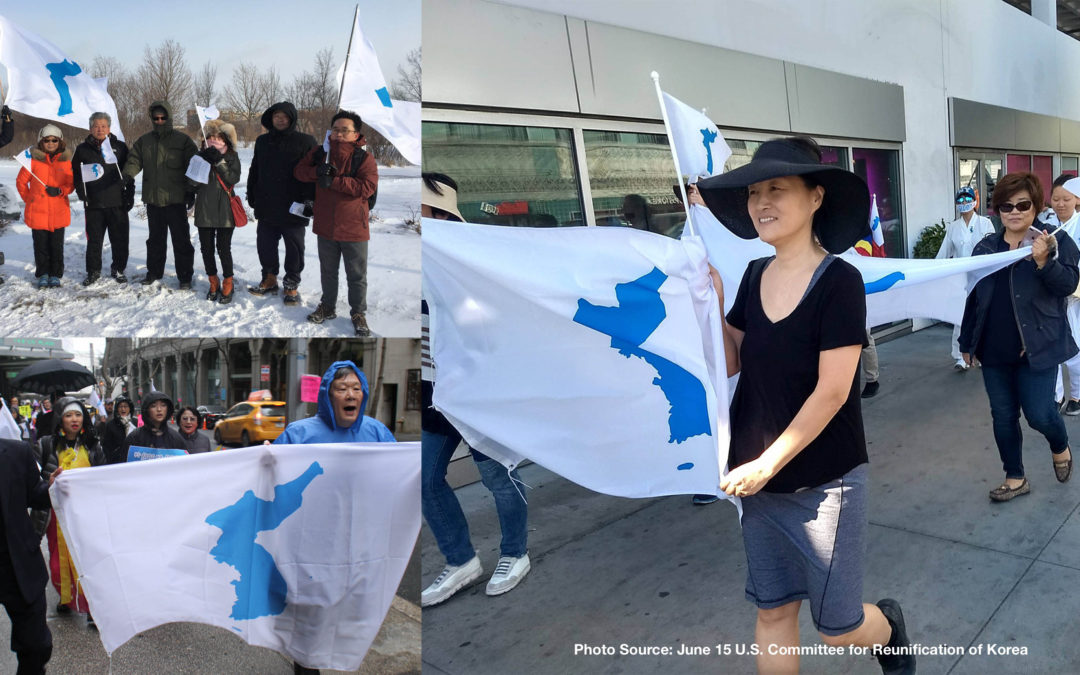 Reposted from Zoom in Korea

The Winter Olympics in PyeongChang, South Korea, begins this Friday, February 9. Sixteen hundred South Koreans cheered the unified Korean women’s ice hockey team in a practice match against Sweden on February 4 in the lead-up to the official games. They waved blue and white unification flags and chanted, “Our country ~ reunification! One Korea!” 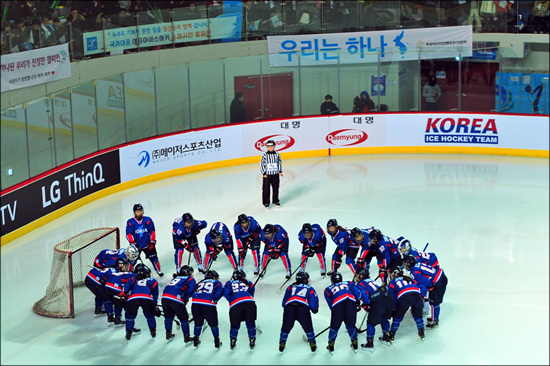 On the same day, Koreans Americans gathered in New York, Los Angeles, and Chicago as part of a nationally-coordinated “Peace March in the U.S. for Successful PyeongChang Peace Olympics,” organized by the June 15 U.S. Committee for Reunification of Korea.

In New York, the peace march began in front of the Permanent Mission of the Republic of Korea (South Korea) to the United Nations. Representatives of the June 15 U.S. Committee delivered a bouquet of flowers to a representative of the South Korean Mission to the UN. The crowd then marched to the Permanent Mission of the Democratic People’s Republic of Korea (North Korea) to the United Nations. 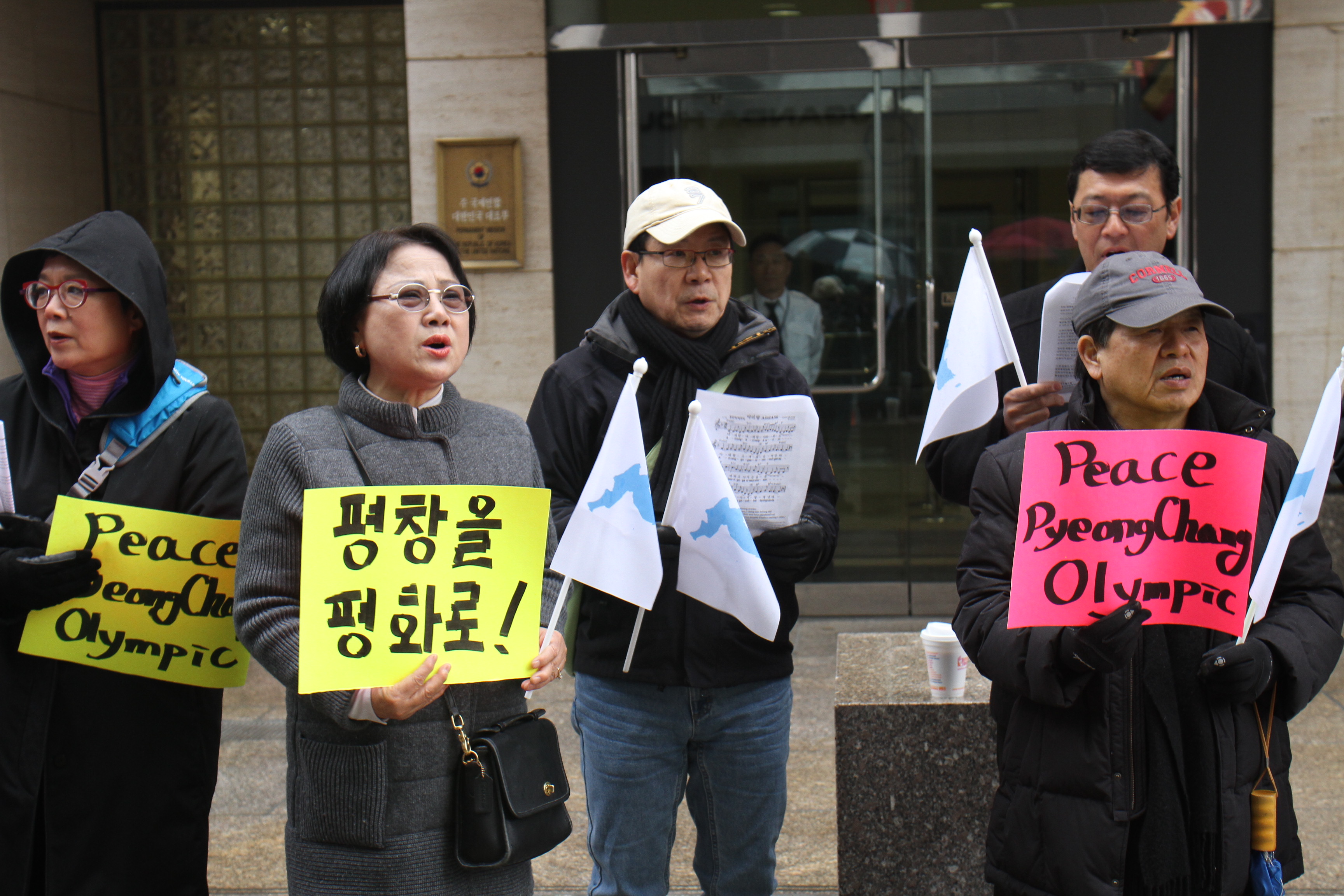 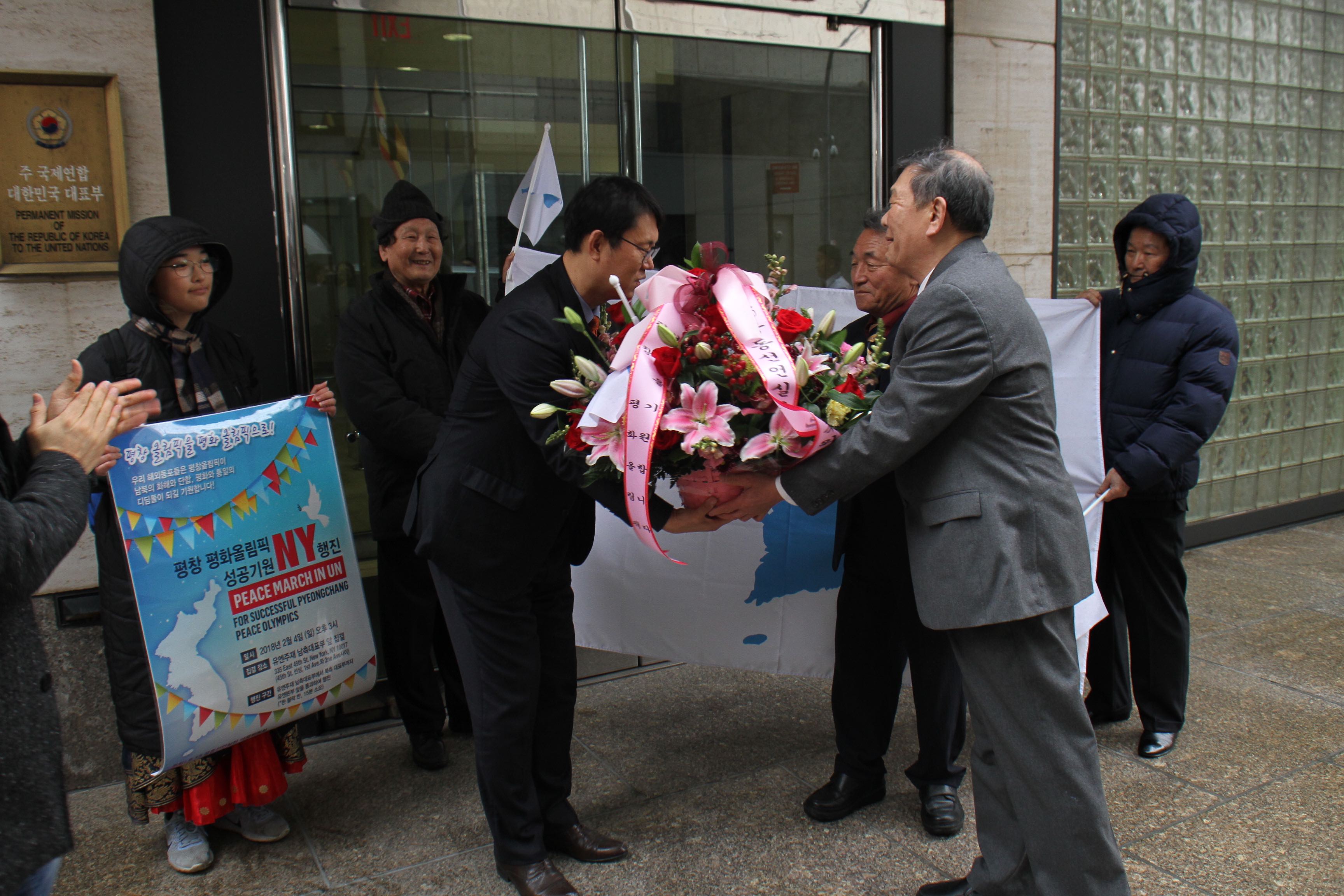 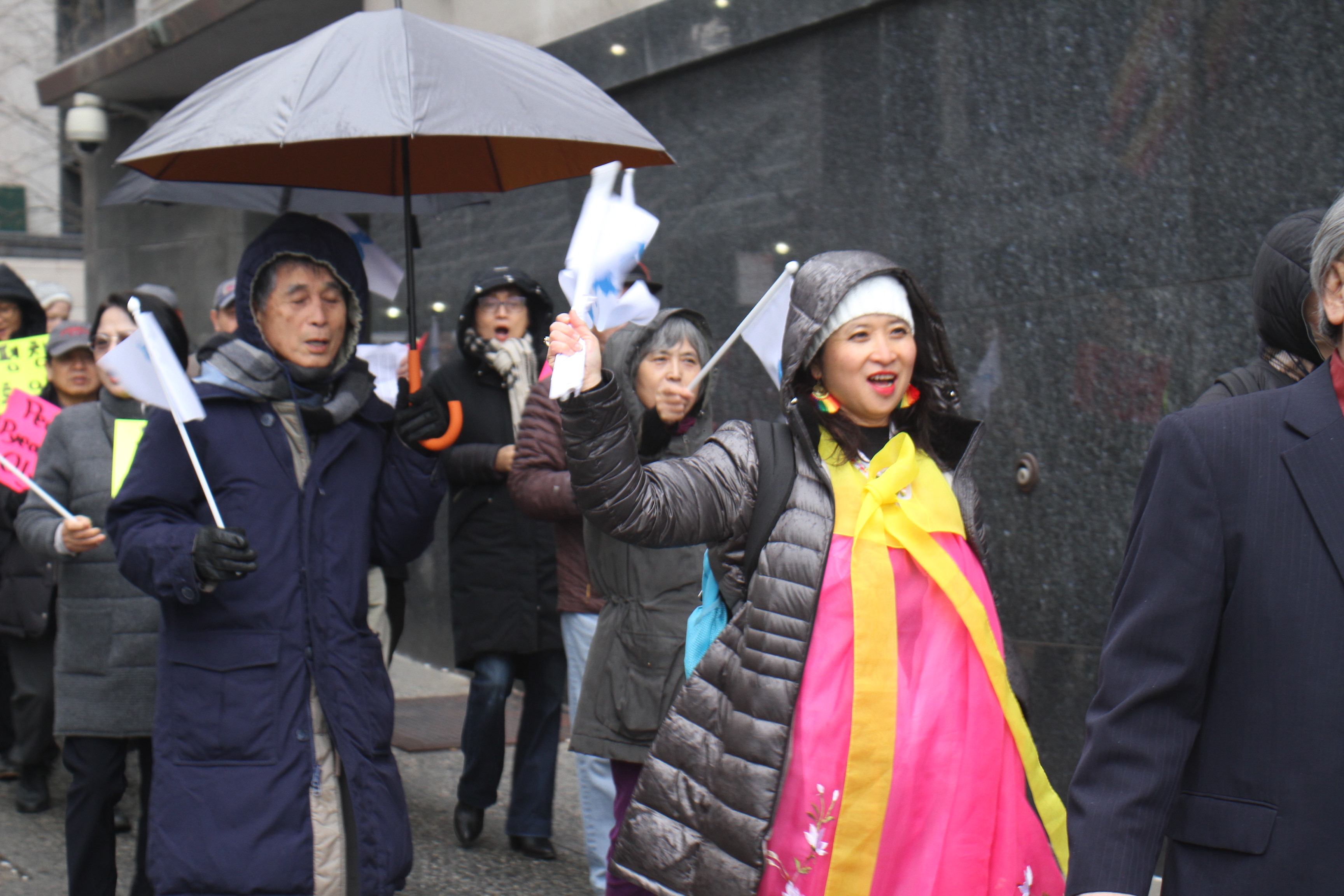 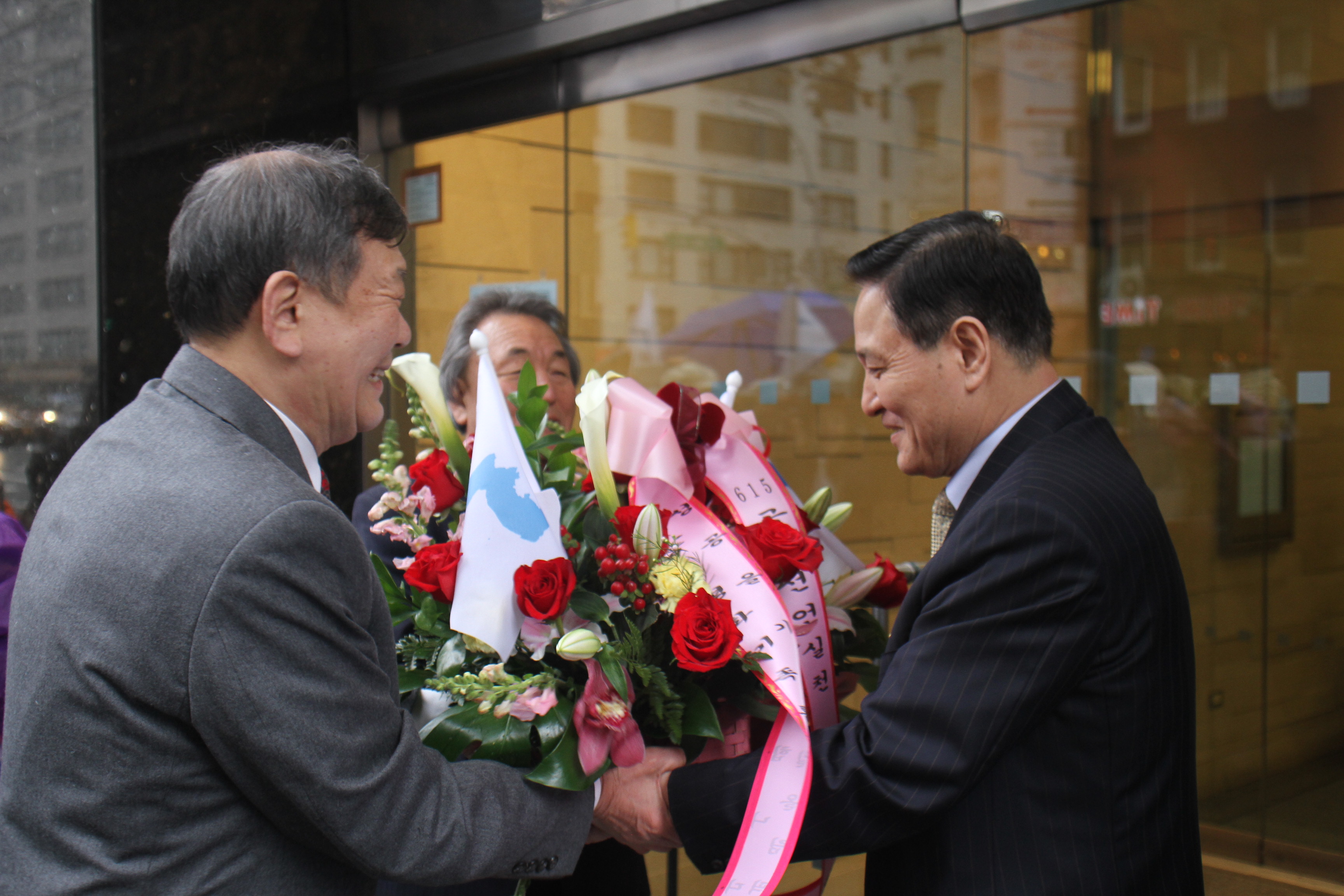 Ja Song-nam — North Korea’s Permanent Representative to the United Nations — greeted the peace marchers outside and also received flowers. He expressed his gratitude and hope that the PyeongChang Olympics will contribute to “improving relations between North and South Korea towards reunification.” Ja joined the peace marchers in singing Arirang— the Korean folk song commonly sung in both the North and South.

In Chicago, Korean Americans gathered at the snow-filled Gallery Park with unification flags. 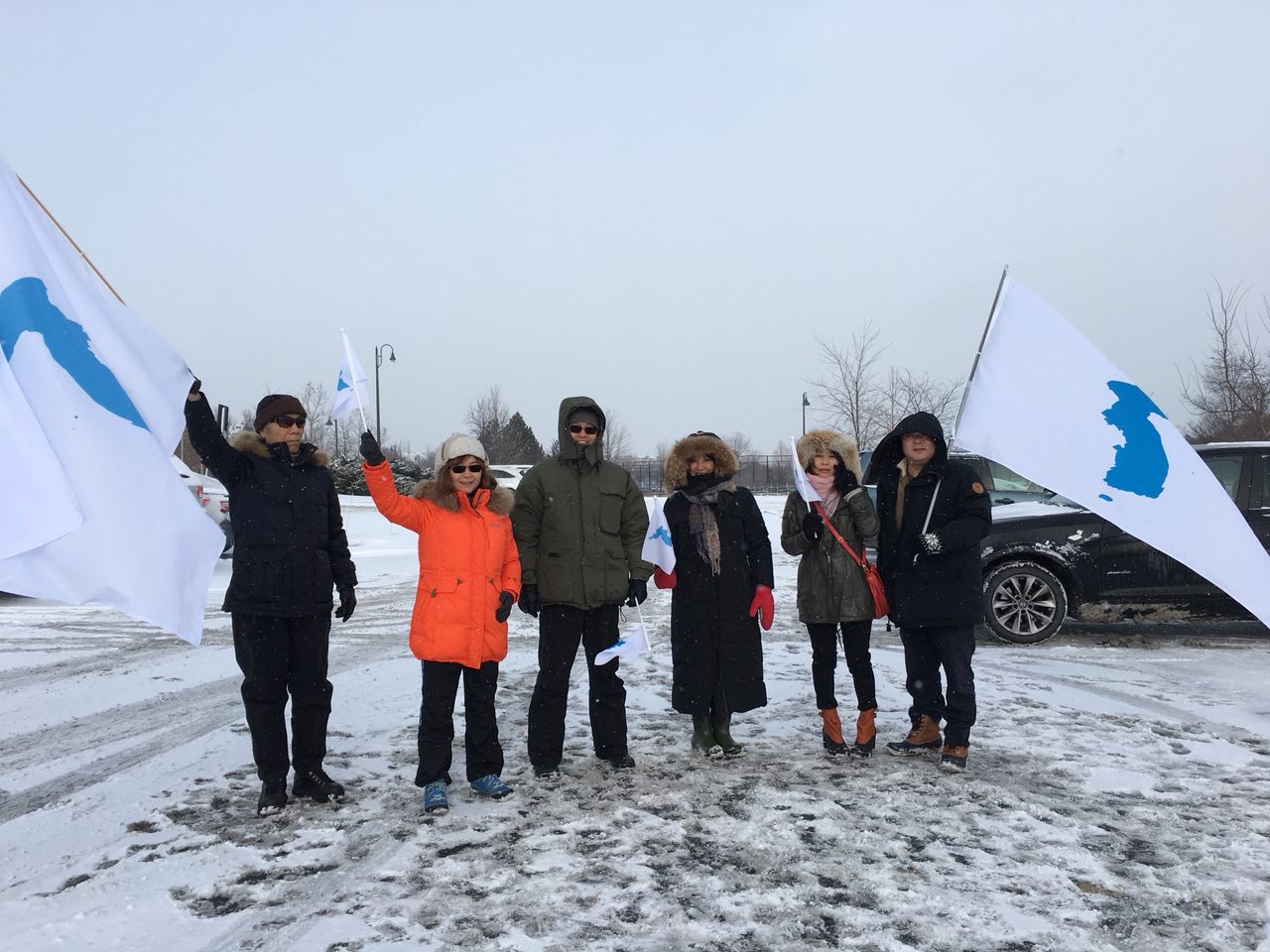 They read the “Peace March for Successful Pyeongchang Peace Olympics” statement produced by the June 15 U.S. Committee for Reunification of Korea:

"Already the Trump administration and South Korea’s ultra-right media have attempted to disrupt the inter-Korean efforts at cooperating and undermine the symbolic meaning of the Pyeonchang Peace Olympics. The White House as well as the conservative media in South Korea have been framing the inter-Korean cooperation as ‘manipulation’ by North Korea to ‘hijack the messaging around the Olympics’…

"We in the U.S. cannot sit idly by and look on with hope and anxiousness… We have to do what we can to ensure that the Pyeongchang Olympics successfully embodies a ‘Peace Olympics.’ And so even though we are Koreans living overseas, we aim to show our support of the Pyeongchang Peace Olympics through peace marches. This is our symbolic gesture of support for our fellow Koreans of the North and South actively working to cooperate with one another."

In Los Angeles, over 100 Korean Americans and allies gathered in Koreatown for the peace march. Korean drummers led the march, and participants chanted, “Korea is one!” The march was hosted by the June 15 U.S. Committee and brought together many Korean American and peace/anti-war organizations, including Veterans for Peace, Progressive Asian Network for Action, Viet Unity, Support Fukushima Committee, ANSWER Coalition, Peace21, Action One Korea, Support Committee for Korean Prisoners of Conscience in U.S., Korean American National Coordinating Committee, SOOBAK, Chamsori, and Korean Peace Alliance.

The march concluded with everyone singing Arirang and Our Wish is Unification. 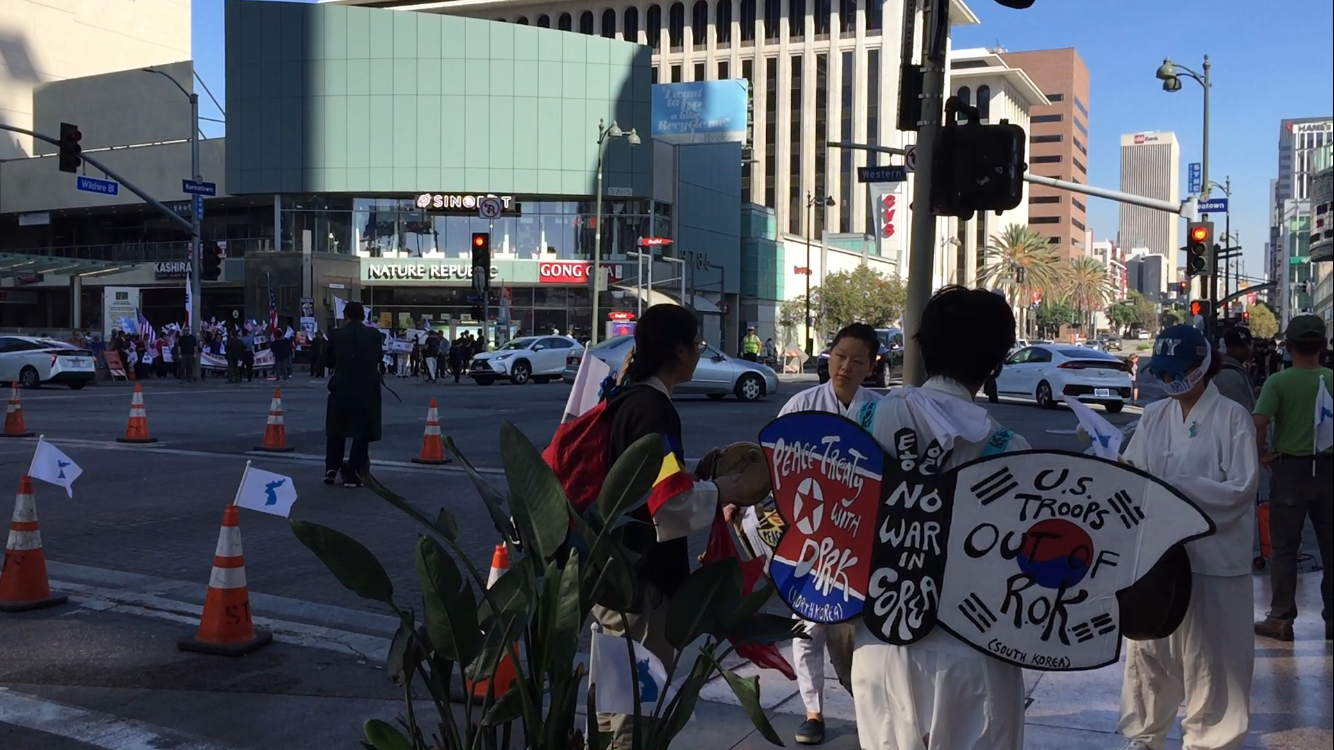 ZoominKorea spoke with participants of the LA peace march about the significance of North-South cooperation at the Olympics. LA organizer Doo Hyun Kang gave his perspective:

"I welcome any opportunity to promote peace in Korea. And the fact that both Koreas were able to put things together in such a short time makes me very proud that I am a Korean American… People in both North and South Korea has suffered enough from war threats. I met many people who are surprisingly numb to the war threats because they have been hearing it since the Korean War. It is not healthy to be in that mindset. It would be nice to be free [from the war threats]."

Keshy Jeong of Korean Peace Alliance and SOOBAK (SoCal Organized Oppression-Breaking Anti-imperialist Koreans) was moved by the show of solidarity:

"Ending the rally with Korean drumming and singing of ‘Our Wish Is Reunification,’ trying to be loud enough that Korea can hear us across the Pacific Ocean, was a moving moment to experience with non-Koreans."

Yong-Sik Lee of Korean Peace Alliance was succinct on what needs to happen for peace in Korea: “U.S. out of Korea is the answer.”

ZoominKorea also asked Korean Americans across the U.S. for their thoughts on recent inter-Korean diplomacy and the upcoming Olympic Games.

Leo Chang — a scholar based in Amherst, Massachusetts, and a member of the Solidarity Committee for Democracy and Peace in Korea — hopes the inter-Korean cooperation will lead to peaceful reunification and self-determination:

"As a Korean-American who witnessed the horrors of the Korean War as a child, I am deeply hopeful that a successful Peace Olympics will facilitate the path to a new Sunshine Policy under the emerging international political milieu. And this new Sunshine Policy will bring about a peaceful accommodation, reconciliation, and reunification of the Korean peninsula as determined by Koreans themselves."

The Sunshine Policy during the South Korean presidencies of Kim Dae-jung and Roh Moo-hyun had not only helped to set the stage for engagement with North Korea but also facilitated cross-border people-to-people exchanges for inter-Korean cooperation from the ground up. After the subsequent decade-long period of right-wing regimes (of Lee Myung-bak and Park Geun-hye) and policies of non-engagement and military provocations by the U.S.-South Korea alliance, the upcoming Olympics could lead to the resumption of the Sunshine Policy and inter-Korean cooperation.

Chang reminded us that the mass candlelight movement of 2016-2017 that ousted former South Korean President Park Geun-hye was central to creating the current momentum:

"The tight symbiotic embrace of the political elite and chaebol conglomerate elites – with an intimate nexus to the US military-industrial complex — has been loosened a bit since the impeachment of Park Geun-hye under the immense political pressure from the massive “candlelight” movement of 2017.

"This vibrant movement was staged by ordinary people from all walks of life demanding basic human rights of self-rule and people’s livelihood. This was a remarkable peaceful movement, politically articulate and mature. It is this pulsating people’s movement with millions of candles, week after week, braving the freezing winter of 2017 that fundamentally changed the character of political dynamics in South Korea for years to come. And this movement for people’s sovereignty played a critical role in the election of Moon Jae-in as the new president of South Korea on May 10, 2017."

Bay Area activist and organizer Hyejin Shim of HOBAK expressed concern that the respite from tension created by the Olympic truce may be short-lived as the U.S. continues its provocative war threats against North Korea:

"The Trump administration’s goal does not seem to be peace or de-escalation. Rather, it feeds off of conflict, chaos and fear. There has been little to no effort from this administration to either de-escalate relations with North Korea or support inter-Korean efforts towards dialogue or peace. The Koreas joining for the Olympics runs counter to the narrative that the US is trying to push, so it makes sense that they would try to delegitimize it."

Shim also warned against uncritical embrace of the Olympics as a mediator for peace:

"While I am grateful that the Olympics are providing a special opportunity for North and South Korea in the midst of a very uncertain and frightening time, I think it’s also important that this is followed up on beyond the Olympics.

"In addition, the Olympics can be very harmful to the local communities that have to host them, causing displacement, exploitation and exclusion of poor and working class people — for example, Brazil’s Olympics were protested en masse by people in Rio De Janeiro for some of these reasons. So I also feel a bit uncomfortable with events like the Olympics being framed as simply positive, even though I understand why it is important to lift up the significance of this year’s Pyeongchang Olympics."

Bay Area activist Juhyun Park of HOBAK expressed alarm at the drumbeat of war in the U.S. media:

"This is an intentional attempt to undermine Korean sovereignty and peace. The U.S. media’s framing casts doubt on the possibility of a Korean-led peace process to justify the status quo of US domination. It also keeps the case for war current in public opinion, thereby pushing the US closer to war."

Chang offered his thoughts on the best course out of the current crisis:

"Should there be a genuine dialogue between North Korea and the U.S., the Trump administration needs to come to terms with what is not negotiable with North Korea: recognition of the DPRK as a legitimate political entity and as a nuclear state."

All agreed on the need for a permanent Peace Treaty, and LA’s Keshy Jeong discussed the role of overseas Koreans:

"As overseas Koreans, we should support our homeland efforts, and as Korean Americans specifically — especially if we have voting power and ability to contact constituents — we should demand as much as possible that the U.S. sign a Peace Treaty with DPRK to end the Korean War, and withdraw all military troops, weapons, and bases from ROK. I would also personally love if we coordinate with overseas Koreans of other countries, such as Koreans in Japan, as Abe’s Japan and Trump’s USA are the two countries with most active warmongering governments."

The Bay Area organization HOBAK is planning a twitter action this Friday, February 9: “As the #PyeongChang2018 Olympics approach and calls for #OneKorea grow, talk of war is also ramping up. Join us Friday in tweeting your thoughts, observations and commentary for #KoreanPeace during the opening ceremony.” 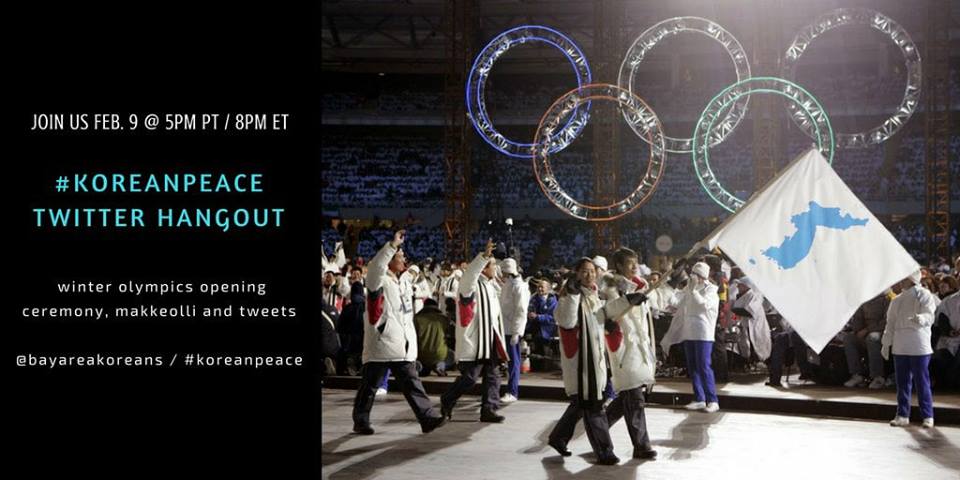 Reposted from Zoom in Korea