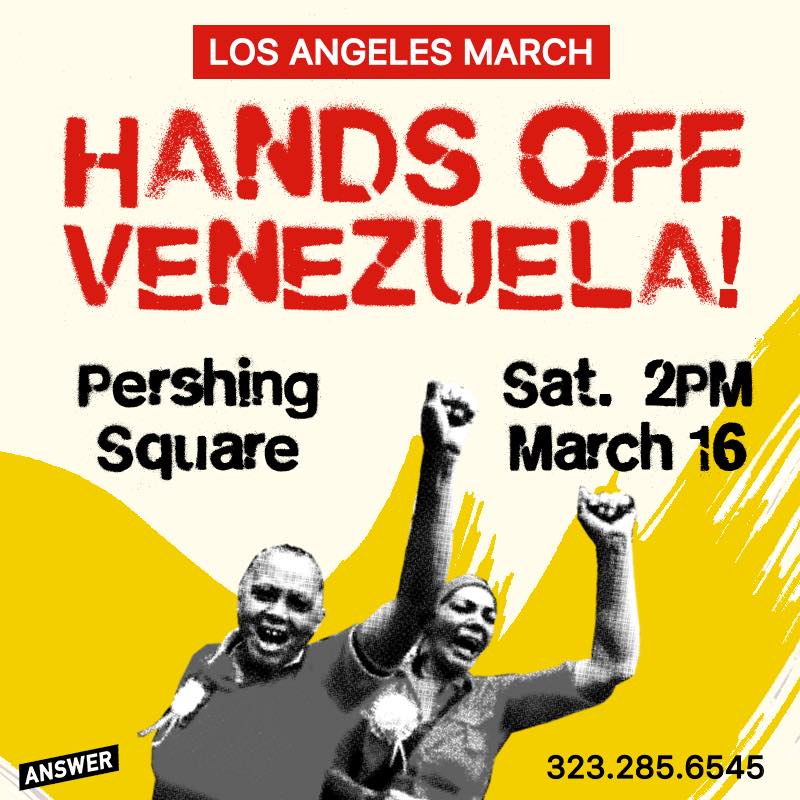 NO coup — NO war — NO sanctions

Join us in Los Angeles on March 16 for a march and rally against the Trump administration’s effort to engineer a coup in Venezuela and a new devastating war there. The Los Angeles action will be held in conjunction with the National March on Washington on March 16.

The outrageous, illegal attacks against Venezuela repeats the ugly pattern of wars for regime change in the oil-rich countries of Iraq and Libya. National Security Advisor John Bolton is reading from the same script, declaring a “troika of tyranny” in Latin America (like the George W. Bush’s “axis of evil”) as a precursor for attempted regime change first in Venezuela, and then Cuba and Nicaragua. Trump has always said that the real “mistake” of the Middle East wars was that the U.S. didn’t “take the oil.”

On March 16, the people of the United States will show the world that the billionaire politicians do not speak for us. We say:

-U.S. hands off Venezuela!
-NO to the coup — the U.S. does not have the right to select other country’s leaders!
-NO to the sanctions, oil embargo and economic war on Venezuela that is already causing suffering for ordinary people in the country.
-NO to military intervention and war from the U.S. and their proxies in the region.