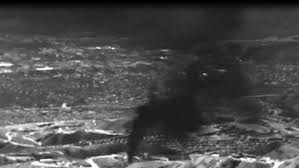 For the past several months SoCal Gas Company has allowed over 1,000 pounds of methane to pour into the Los Angeles sky per day - over a quarter of California's total annual emissions and counting. This has been deemed a greater environmental disaster than the Deepwater Horizon explosion when BP Oil dumped millions of gallons of oil and chemicals into the Gulf of Mexico. The massive leak and the failure of government agencies to take meaningful action in California is an immediate echo of the failure of governments throughout the world to take action on climate change in Paris in December. The persistent, grassroots fight back movement in and around Porter Ranch points the way forward on how to win against big polluters.

Join us for discussion:

February 6 marks the 40th anniversary of the extradition of Leonard Peltier to the U.S. to be railroaded in a corrupt trial for the alleged murder of two FBI agents at the Pine Ridge Reservation in 1975. The state has done all it can to keep Peltier in prison including illegal practices in court, outright lies, and withholding of physical evidence. He has been denied countless appeals despite clear evidence of his innocence and repeatedly denied adequate healthcare in prison. The state has pursued a policy of decades of torture and abuse in the hopes that Peltier's example of Native resistance for self-determination would not be followed by young Native people. But the growing movement of Native resistance across the country to Columbus Day, racist mascots, police murder, and the canonization of genocidal, colonial priests shows that imprisoning a revolutionary leader like Peltier can't stop the movement. This year is a critical year to focus the energy of these growing movements on a fight for clemency for Peltier - guilty only of defending his people against an onslaught of extrajudicial murders in the 1970's COINTELPRO terror.

Andrew Gwoz
Donate to the Movement Volunteer - Get Involved Today