The ANSWER Coalition supports the important work of the Lead Out Now! campaign in Chicago. Below is an update on its latest activities. 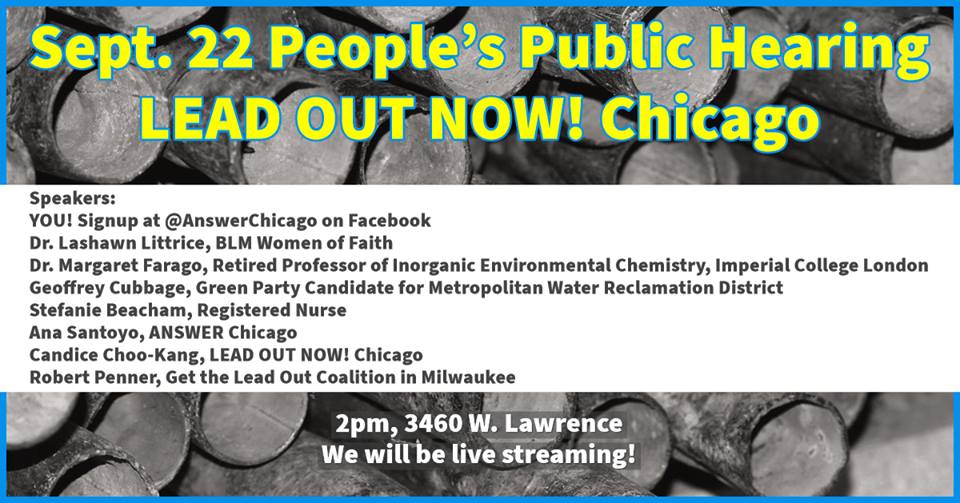 There's large amounts of toxic lead in Chicago's water and no one at city hall is doing anything about it. According to court findings, the city is actually making the problem worse while lying to the people, telling us that the water in our homes, schools and parks is safe to drink. In other words, #RahmsPoisoningUs. We're fighting back!

Join us on Sept. 22 for a People's Public Hearing to Get The Lead Out!. We’ll hear scientific testimony, open the mic for input from the public, indict Mayor Emanuel for intentionally poisoning the people of Chicago, make more plans to win this campaign & MORE!

The hearing will be livestreamed and recorded as part of this all sided campaign.

There is lead in the water and the city is doing nothing about it. Recent studies have found high amounts of lead, a neurotoxin that is unsafe at any level, in the water of Chicago homes. There are over 400,000 lead service lines -- all installed by a mandate from the city despite the known hazards -- poisoning the residents of the Chicago. The poisoning of the city disproportionately effects children, our schools, poor and oppressed people. Mayor Emanuel says he will do nothing -- even though city water projects have been found, by a judge, to increase the lead levels in city water. That is criminal! We are fighting back and together we will get the lead out!

Act now to force the city take action on the dangerous levels of lead in Chicago’s water. Tweet @ the mayor and @ your alderman now. Use the hashtag #RahmsPoisoningUs (Twitter @s below)

Dangerous amounts of lead have been found in tap water in people’s homes, schools and parks all across Chicago. The mayor, the city and your alderman are doing nothing about it. In fact, the city’s program of replacing the main pipes has been found in court to be making the lead contamination worse. Despite the evidence, the city refuses to replace the over 400,000 lead service lines that remain as a result of the city requiring lead service lines up until 1986. No amount of lead is safe.

Only the people will protect our children and all of us from the city continuing to intentionally poisoning us. This stops now! #RahmsPoisoningUs

For more info and/or to sign and share the online petition go to http://leadoutnowchi.org/
To donate: https://www.gofundme.com/lead-out-now-chicago

@RahmEmanuel remove all 400,000+ toxic lead service lines & more that are contaminating Chicago’s drinking water. The city mandated their use. The city needs to take them out! No amount of lead is safe! #RahmsPoisoningUs

@Alderman_Moreno remove the lead service lines now. The city mandated their use. The city needs to take them out. Money for safe drinking water and housing, not Amazon HQ, Cop Academy & gentrification! #RahmsPoisoningUs