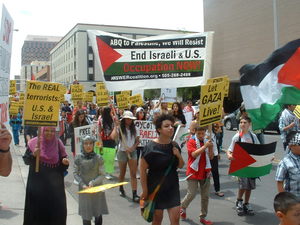 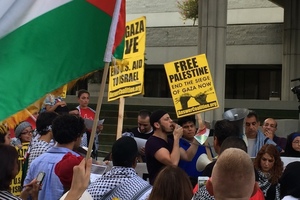 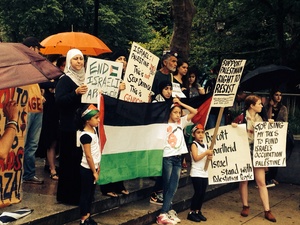 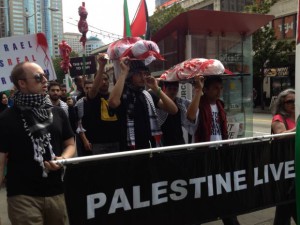 In the run-up and after the massive Aug. 2 national march for Gaza in Washington, D.C., local protests have been occuring in solidarity with Palestine. Below are several reports from these actions published by Liberation News.

A loud and passionate crowd of 250 people marched through downtown Albuquerque on  August 2 in support of Gaza. The marchers, reflecting the diverse spectrum of Albuquerque citizens, were of all ages and many religions and nationalities.

While a small group of pro-Israel counter-protesters yelled slogans of hate and racism, hundreds of demonstrators gathered in downtown Ft. Lauderdale in front of the Federal Courthouse to condemn the massacre in Gaza and to send a message of solidarity to the Palestinian people.

The same day in cities across the country, tens of thousands of people joined marches and demonstrations in support of a free Palestine.

During the rally, a list of names of children murdered by the U.S.-backed Israeli forces in Gaza were read. Many wept, yet wiped aside their tears to chant, “We are all Palestine!”

Read more and view a video from the action

For the fourth consecutive week hundreds of Philadelphians gathered in opposition to the Israeli assault on the people of Gaza.

At this week’s rally Liberation News spoke with Ayman Najim, a Palestinian man studying in the United States whose wife and two children still remain in Gaza. He spoke about life under occupation:

“You don’t have electricity anymore. You are besieged in a small enclave of land. You are living in a concentration camp."

In a dramatic protest, protesters carried stretchers representing the dead bodies of Palestinian children in a funeral march through downtown Seattle.

The group Voices for Palestine has organized at least one protest a week for more than a month. Today’s action brought out many who were new to demonstrating, as well as veteran activists.