Lots of soldiers could die in Iraq — and not fighting ISIS 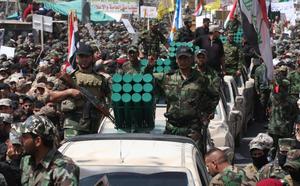 The Mahdi Army holds military parade on June 21, 2014, calling for unity among Sunnis and Shiites against Islamic State. They have just announced they will attack any U.S. ground troops in Iraq.

More major developments have set the stage for Washington’s plans in Iraq to spiral into bloody disaster, like the erroneously named “Operation: Iraqi Freedom.”

Since early June, when the self-described Islamic State launched its surprise offensive in Iraq, President Obama has repeated there will be “no boots on the ground” and that “American troops are not going to be fighting in Iraq again.”

Washington is asking us not to consider what has now snowballed to 2,000 U.S. Army Special Forces, Marines and pilots as combat troops, because these are the secret soldiers, the ones who operate in the shadows—the boots on the ground in covert combat operations from Africa to Asia.

Even if we buy their line that their “military advisers” don’t count as ground troops, Obama’s promise was contradicted on Sept. 16 by General Martin Dempsey, the highest military commander in the United States.

Dempsey said to the Senate Armed Services Committee that he would recommend the deployment of non-“advisor” U.S. combat troops if the current plan to “destroy ISIS” does not immediately succeed.

When asked by the Senate Committee if the U.S. military was “prepared to put boots on the ground,” he replied “yes.”

Obama has quite often acquiesced to the urgings of the right-wing militarists. U.S. military involvement has already escalated at an alarming pace since June. And there seems to be a great lack of confidence inside the U.S. political establishment and among U.S. allies that the Obama plan can succeed in destroying IS, especially in the short term.

Dempsey’s announcement came alongside a very significant warning from the Shiite militias in Iraq that inflicted heavy casualties on the U.S. military throughout the course of the occupation. Muqtada al-Sadr, commander of the Mahdi Army and leader of the Bloc of the Free (a major Shia political coalition), said that if U.S. ground troops were to come back to Iraq, their 500,000-strong force would start attacking them.

They likely would not be the only militias who fought against the U.S. occupation who would again return to combat if they saw U.S. soldiers return.

U.S. troops would not just be embroiled in a ground war with the highly-organized and well-funded Islamic State, flowing in endlessly from Syria, but would again be fighting the same Iraqi militias that played a major role in forcing the U.S. military out of Iraq just three years ago.

Despite the “just” rationales the politicians give for fighting the Islamic State, the very real possibility of regular Army troops heading back to Iraq would be an exact repeat of the Iraq war situation: a foreign occupation unwanted by the people of the country who wage a determined fight to drive it out.

If that happens, there is no telling how long the politicians will leave U.S. soldiers in Iraq to be killed, or how much they will increase the number of troops. If the wars in Iraq and Afghanistan over the past 13 years are any indication, they are not a fan of withdrawing, even when it is clear that they can have no military victory on the ground and U.S. soldiers are taking heavy casualties. They, in fact, have always reacted by sending “surges” of more American soldiers.

The U.S. military presence Iraq starting in 2003 led to an eight-year disaster that devastated the Iraqi people and led to the deaths of close to 5,000 American soldiers. More than 30,000 families in the United States were torn apart by watching their child, spouse, sibling or parent come home in a box, or come home maimed with life-changing wounds.

The Iraq war yielded well over 250,000 Traumatic Brain Injuries and 17,000 amputations for U.S. soldiers. Countless more have had to live with the daily struggle of the psychological wounds, which are claiming veterans’ lives in numbers comparable to the number of combat deaths.

In Iraq, there are five million children who became orphans during the war. That only scratches the surface of the suffering the U.S. war on Iraq caused innocent people.

U.S. service members, veterans and our families have suffered enough from the reckless decisions of the politicians and generals. We are all still trying to pick up the pieces from the last time we were carelessly tossed into Iraq.

Even the officials anxious to get the U.S. military back into Iraq, like Secretary of Defense Chuck Hagel, admit that the Islamic State poses no threat whatsoever to U.S. soil.

They only say they are a threat to so-called “American interests.” Most Americans do not own oil companies or banks, so the Americans they’re talking about who have actual interests in the region are infinitesimally small compared to our whole population.

The Iraqi people and the Syrian people are fighting to defeat IS in their own countries. It is their fight, not U.S. soldiers. The politicians want us to believe it’s our fight, because they have something to gain—using military force to reshape the region in the interests of the U.S. capitalist class.

Those Shiite militias who issued the threat to the U.S. military are engaged in heavy fighting with IS in Iraq, but are now under orders to abandon any battle with IS if they observe any “American advisers” participating.

Al-Sadr has been rallying for unity among Shiites and Sunnis to organize against IS. There are many other militia groups in Iraq that are now actively fighting IS—or that have the potential to join the fight against IS—who would undoubtedly take the same course as the Mahdi Army, and turn to fighting the re-occupation by the foreign military that has so recently decimated their country and killed around one million people.

The blood-drenched criminal legacy of the U.S. war in Iraq is burned into the consciousness of the Iraqi people. Many ordinary unaffiliated Iraqis, too, would likely join the fight against U.S. occupying troops, just as they did before.

The White House and Pentagon, with the help of the U.S. media, is using the horror over the beheadings of American and British civilians to whip-up fear; but it was they who threatened, multiple times, the families of the hostages with criminal persecution of “supporting terrorism” if they raised money to pay the ransom IS was demanding.

What soldiers can do

The politicians in Washington and the officers in the Pentagon have proven completely willing to make us the sacrificial lambs of their disastrous war strategies and hidden ulterior motives. The past 13 years they have treated our lives, both sending us to war and when we get home, with the most callous disregard.

A conclusion that so many of us who were sent to the Iraq war have come to is that if we could turn back the hands of time, we would have refused the orders to go.

U.S. troops today should take that lesson to heart. It is not worth being the cannon fodder in another arrogance-driven military adventure in the Middle East.

U.S. troops can take their lives into their own hands, instead of leaving them in the hands of dishonest rich men who have done nothing but fail us our entire lives.