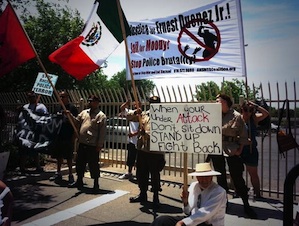 June 9 was the second anniversary of the killing of Ernest Duenez Jr. by Manteca police officer John Moody. Duenez's family marked the occasion by organizing a rally and march, attended by around 300 including several ANSWER Coalition (Act Now to Stop War and End Racism) activists, to demand that Moody be held accountable.

The rally began in front of the house Duenez shared with his wife, Wendy. On June 8, 2011, Duenez parked his truck in his yard. Footage from Moody's dashboard camera shows that the cop had followed Duenez in his car. When parked in front of Duenez's house, Moody told Duenez not to move. Duenez began to exit his vehicle when Moody charged, gun drawn. As Duenez was slowly exiting the vehicle, Duenez opened fire, hitting Duenez 11 times. Moody continued to fire into Duenez even as he lay injured on the ground. Later in the video, another Manteca cop, Armen Avakian, claims to find a knife in Duenez's truck, which Moody claimed to see in Duenez's hand as he was exiting. No knife appears visible in Duenez's hand in the video, however.

On December 12, 2012, the San Joaquin County District Attorney's Office cleared Moody of any wrongdoing. He has since been promoted by the Manteca Police Department to train other officers in his “tactics.”

Christina Arechiga, Duenez's cousin, told Liberation News: “Going to our lawmakers, going to people who we appoint to help us, is not working. So we're going to bypass them. We're going to do what we have to do to get where we need to get. And that's them realizing that we need them to change their policies.

She continued: “The fact that they can't even say their policies are going to change, or the ways that they do things are going to change, is ridiculous. It just goes to show that the corruption is far greater than we even think. The mayor [Willie Wetherford] won't do anything because he's the former police chief. He is John Moody's former boss. ... So [Wetherford] isn't going to say anything about John Moody because he knows that could come back at him. And this is the kind of thing we're going to start calling out to them.”

“We are still being followed when we drive around Manteca,” Arechiga said. “We all have 'Justice for Ernest' stickers on our cars and [the Manteca PD] follow us for 20, 30—the other day they followed me for 40 minutes while I was driving around town. By the time I got out of the store, they were still there waiting for me. ... They're tailgating us. We deal with that. ... It's something I'm going to be taking to the Manteca City Council to address. We're not going to tolerate it. We didn't do anything wrong.”

People came from all over California to stand with the Duenez family. Many had also lost loved ones to police violence. Elizabeth Henning-Adam told Liberation News of her son Robert C. Henning II, who was killed by the Los Angeles Sheriff's Department on Feb. 2, 2012:

“His car had broken down on the freeway. ... There was an eyewitness who said he was maybe having a mental episode. ... He was sitting in the middle of the road talking to himself. He could have been car-jacked. The police showed up and later claimed he went for a weapon. ... They shot him twice and killed him. He was 22 years old. He was passing through LA to see his daughter on her second birthday. ... He was unarmed. His keys were still in the car. He was a skateboarder, his skateboard was in the car. We know he had cash because he was traveling. The police say he had no personal affects with him. No cell-phone, no wallet. ... I have a feeling that they're going to pull out some crap like it was suicide-by-police, and I just don't believe that for one minute.”

Henning's father added: “There was an eyewitness who was 10 feet from where they shot him and he says, 'Unless I blinked, he never went for a gun. There was an officer holding him by each arm.' So he doesn't even know how [the Sheriff's Department] is saying that.”

“The eyewitness is a real nice guy,” Elizabeth continued, “He saw [Henning] sitting in the middle of the road and he pulled his car over to block traffic. He didn't want [Henning] to get hurt. ... [The eyewitness] didn't want to get out of the car; he didn't know what was going on. So he called the police. He has a lot of guilt over that. A cop arrived, and [the eyewitness] heard him call in a 51-50 [police code for a person of danger to him/herself]. The next thing he knew there were four or five cars pulling up. He says as soon as the officers got out of their car, he heard them all lock and load their weapons.”

“The eyewitness,” Henning Sr. added, “said they had other means to address [Henning] like bean bags and tasers and they chose not to use them.”

“I just want to see the police reports,” Elizabeth said, “I don't even know the name of the officer who shot my son. I know nothing. The LA Sheriff's Department has told us 'Don't call here anymore.'”

Filmmaker Ansar El Muhammed also attended the march. His documentary on the struggle of the Duenez family, “Crimes of Police,” is currently in the festival circuit. Muhammed told Liberation News that he was inspired to make the film because two families he knew in Stockton, Calif., had also lost loved ones to police violence. “They asked me to film [the victims'] funerals. And just coming out of that experience, seeing the pain they went through, I just felt inspired to do the film. ... One was 16-year-old James Rivera. One of them was Luther Brown. ... Luther Brown was running from the cops and then they caught up with him and they said that he tried to take one of the officer's billy clubs, but the witnesses who saw it said that didn't happen. Rivera was allegedly in a stolen car and [the cops] chased him ... knocked the car into a house and then they shot 48 shots into the car and hit him 11 times. [The cops] said that when they ordered him out of the car, he revved the engine. That was their reason for shooting him.”

The Duenez family led the orderly march throughout the center of Manteca. Several motorists honked their horns in support of the Duenez family and some stopped to congratulate the protesters. A major goal of the march was to promote a July 21 action to mark the one-year anniversary of the uprising in Anaheim, Calif., against police terror. Many flyers for the event, which will be attended by both the Duenez and Henning families, were distributed to the people of Manteca.

The Manteca cops were nowhere to be seen. No cop cars could be seen during the course of the march. When the protesters arrived at Manteca police headquarters to loudly chant “Justice for Ernest Duenez!” and “Jail for Moody!” it appeared abandoned.

After the rally, Alex Salazar, a private investigator working with the Duenez family, told Liberation News: “I'm a former police officer. I know how the system works. I can identify with the level of excessive force that was leveled upon this person [Duenez] who was unarmed. ... A lot of people are being targeted for execution. This was by no means a random vehicle stop. The video clearly shows that he [Moody] was on a surveillance of this person. And if in fact [Duenez] was such a dangerous person, then why didn't [Moody] have a back-up?”

Police attitude: 'When in doubt, take them out'

Salazar runs a website called renegadepopo.com that, he says, helps “the public and police officers with post-traumatic stress or who are trapped in the la muerta of the code of silence."

He continued: "We're [cops] no different sometimes than the gangs or even the mafia. ... As a former police officer, its really important for us to accept that there's still a lot of these antiquated ways of racism, excessive force and basically a twisted mentality that exists. There are police officers that have these ideas that, 'It's better to be tried by 12 than carried by six. When in doubt, take them out.' And there's just a real negative attitude towards the people. People are demonized, criminalized. They're treated as sub-standard humans.”

Duenez's mother, Rosemary Duenez, spoke to Liberation News about the success of the march: “This is the kind of unity we need. We need people to stand together in order to get people to open their ears to the injustice that's going on, not just to our family but to many other families. We just happen to have a video. But how many families out there don't have anything to back them up? All they have is word of mouth or witnesses. And then the police harass the witnesses and destroy the videos. What do they have? They don't have what we have, so we have to stand up not just for our son but for all these children.”