March 19: Show Them Why You're Marching 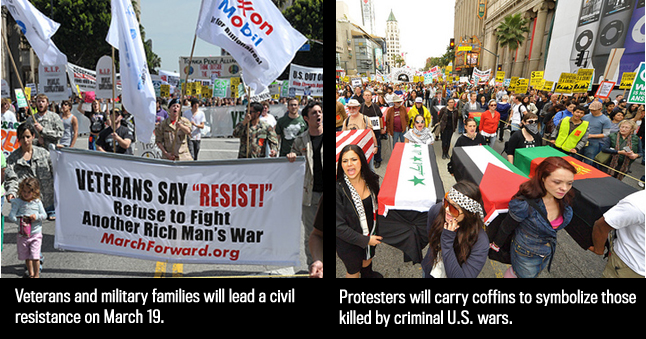 In just days, we will be taking to the streets in Los Angeles! We are hearing from people all over Southern California who are coming to bring their message to Los Angeles, and we want to share with you some of the plans and ways that you can make an important contribution to the impact of the March 19 March and Rally to Stop the Wars and Fund People's Needs!

People will be coming to LA by bus, van, car, train, plane and metro from over 50 different cities, neighborhoods and schools across Southern California. Large numbers of veterans, service members, and their families; members of the Arab and Muslim community; students and teachers; representatives of neighborhood anti-war and peace groups; and many others are mobilizing to join the demonstration.

We will gather at 12 noon at the corner of Hollywood and Vine in Los Angeles. Click here for detailed protest logistics, including maps, directions, parking info and much more.

There will be thousands of printed and handmade signs. We will also be making dozens of coffins with flags representing the multinational victims of U.S. wars of aggression, and many people and organizations are bringing coffins that they are making themselves. You can help make and carry coffins in the march by arriving at Hollywood and Vine between 11am and 12 noon.

Students facing tuition hikes and cutbacks, union members and leaders, workers who have been laid-off from their jobs, people without health care and facing foreclosure or eviction, or others feeling the domestic impact of the war are bringing some visual representation of their struggles. This may be in the form of a handmade sign, or it may be another type of creative visual representation.

There will also be symbolic tombstones to represent the cutbacks affecting working families and students. The tombstones read "R.I.P. Health care," "R.I.P. Public Education," "R.I.P. Jobs," and more. You can carry a tombstone and be a part of the "Money for people's needs, not war" contingent.

One of the most dramatic visual representations will be a contingent of veterans  and military families leading the March 19 protest in LA. The veterans' banner will say "Veterans say 'RESIST!'"

At the end of the march, veterans and military families will engage in a civil resistance action. Everyone is encouraged to support this important action.

You can also bring visuals that represent the issues raised by the demonstration. We encourage you to be creative and bring all of your friends out on March 19 to stop the wars!

Be Seen AND Be Heard

We’ll have speakers on the march and at the rally, and of course we’ll be chanting. We also want to have as many drums as possible, so we are encouraging everyone who can to bring a drum (or a bucket or other implement on which you can drum). The drums should have straps so you can hold them while at the rally and on the march.

If you are not able to bring anything, don't worry. You can pick up a sign when you arrive. Here are a few things you can bring.

* Handmade sign with a slogan
* Symbolic coffin
* Photograph of Afghan, Iraqi or Palestinian victim of war
* Photograph of a family member or friend who has been killed or injured in Afghanistan or Iraq
* Visual representation of the domestic cost of war
* Drums or drumming implement (with straps so you can hold it)

Donate to Make March 19 a Success

Click here to help cover the costs of the demonstration. Because of the growing momentum for the protest, we need to raise an additional $3,000 in the next few days to cover professional sound systems, stages, trucks, permits, port-a-johns, signs, banners, buses and so much more.

More information about March 19 is available at www.AnswerLA.org. You can also call 213-251-1025 or email [email protected].