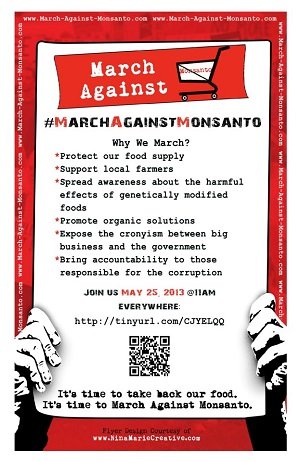 The ANSWER Coalition is supporting the call below issued by Occupy Monsanto and asks its supporters to attend an action in their area.

On May 25, activists around the world will unite to March Against Monsanto.

Why do we march?

Research studies have shown that Monsanto’s genetically-modified foods can lead to serious health conditions such as the development of cancer tumors, infertility and birth defects.

In the United States, the FDA, the agency tasked with ensuring food safety for the population, is steered by ex-Monsanto executives, and we feel that’s a questionable conflict of interest and explains the lack of government-led research on the long-term effects of GM products.

Recently, the U.S. Congress and president collectively passed the nicknamed “Monsanto Protection Act” that, among other things, bans courts from halting the sale of Monsanto’s genetically-modified seeds.

For too long, Monsanto has been the benefactor of corporate subsidies and political favoritism. Organic and small farmers suffer losses while Monsanto continues to forge its monopoly over the world’s food supply, including exclusive patenting rights over seeds and genetic makeup.

Monsanto's GM seeds are harmful to the environment; for example, scientists have indicated they have contributed to Colony Collapse Disorder among the world's bee population.

Below is a listing of just a few cities where actions will take place:

Chicago
Saturday, May 25 at 12:00noon
Federal Plaza (Adams and Dearborn)

San Francisco
Saturday, May 25
Union Square Rally at 11:00am
March along Market St. at 12pm