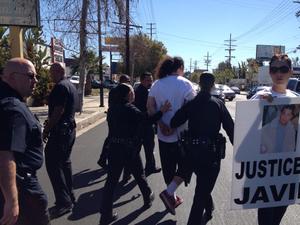 Damion Ramirez being led away in handcuffs after false arrest

On Oct. 5, protesters gathered in front of the West Valley Division of LAPD in Reseda, Calif., to demand justice for Javier Arrazola Jr. marking the one-year anniversary of his murder by LAPD Sergeant Charles Wunder.

Javier was murdered in an apartment complex after Wunder shot the prongs of a taser directly into his heart despite use warnings and training that specifically state not to do so. Javier was Sgt. Wunder’s fourth Latino victim during his career with the LAPD. Not only has Wunder not been fired or charged with any of the murders, he has also been permitted to continue profiting from his own Newbury Park security company, Discreet Protection Services, Inc.

The Arrazola family, ANSWER Coalition, Nidas Rydas and the Brown Berets organized the protest, which marched down Vanowen Street and Reseda Boulevard from the West Valley LAPD station to the site where Javier was killed.

Throughout the march, the LAPD took an extremely aggressive posture, ramming their vehicles into multiple points of the march and hitting several protesters with their cars. Despite the repression, the people remained determined and disciplined.

The LAPD singled out Damion Ramirez to be arrested in an attempt to intimidate the crowd. Damion is a consistent, highly active and charismatic leader of the police brutality movement throughout California. A union plumber and friend of Michael Lee Nida, who was murdered by the Downey Police Department on Oct. 22, 2011, he has since been an important leader of Nidas Rydas and one of the organizers of a statewide network of organizations and families who are fighting to end police brutality. He has also worked with other organizers to establish the Young Survivors – Legacy Support Network, an organization consisting of the children and other young people who have lost their loved ones to police violence in order to provide social support and other vital services.

Damion was charged with “Resisting, Delaying, or Obstructing” an officer, which is a charge leveled against anyone they wish to arrest who has not committed any crime. Video footage from the demonstration also clearly shows that Damion was walking peacefully when two officers charged toward him and carried out a false arrest. Throughout the footage, Damion is seen cooperating with officers from the time of contact until he is placed in the police vehicle.

After the attack by the LAPD, the demonstrators marched on to the end of the route where the Arrazola family paid their respects at the site of the killing.

The Arrazola family renewed their commitment to winning justice for Javier at the closing rally while organizers from the network of organizations and families announced their plans to ensure that all charges against Damion be dropped.

Organizers from the ANSWER Coalition in Los Angeles along with countless families affected by police brutality and other organizations have already begun mobilizing court support for Damion’s first appearance on Oct. 30.

Justice for Javier and all victims of police violence!

Join the movement to have all charges against Damion Ramirez dropped immediately!