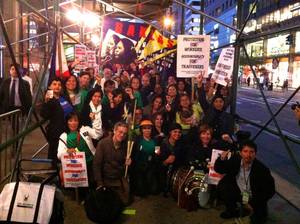 On Sept. 23, Damayan Migrant Workers Association and their allies in T’ruah, JFREJ (Jews for Racial and Economic Justice) and Women Organized to Resist and Defend (WORD) held a rally at Dag Hammarskjold Plaza in New York City to demand an end to the modern-day slavery of labor trafficking and to promote Damayan’s Baklas campaign. New York City is the home of the United Nations Headquarters and the second largest home to diplomatic missions in the United States, after Washington, D.C. Incidents of domestic worker trafficking by diplomats are appallingly common.

During the rally, organizers expressed their outrage at the lack of effort made by the U.S. State Department and foreign embassies to protect and aid victims of labor trafficking, and to end all forms of labor exploitation and trafficking. To add insult to injury, diplomats are granted immunity and protected against charges for their crimes. WORD organizer Karla Reyes said, “We must hold all of those who permit labor trafficking to happen accountable – from the wealthy diplomatic families, the diplomats' country of origin and all countries that profit from these women's work and the money they send back.”

After the rally, energized protesters proceeded to march along the streets chanting loudly “Free, free domestic workers, end, end the slavery” and “When workers’ rights are under attack, what do we do? Stand up, fight back!” Protesters made stops at the Mauritius and Tanzanian consulates, where domestic workers who were survivors of labor trafficking shared their stories.

Each survivor talked about the inhumane working conditions they endured for little to no pay. They also talked about how they have become organizers in the struggle against labor trafficking. After each testimonial, the consulates were presented with an “F” grade for failing to hold diplomats and other government officials accountable.

The march proceeded to head toward the Japanese consulate before arriving at the final destination at the Philippine consulate, but demonstrators found that it was blocked off by the New York Police Department. At the Philippine consulate, Damayan organizer Leah Obias summed up the situation: “Instead of protecting the workers, the police are protecting the traffickers who are staying in the hotels near the Japanese Consulate for the UN General Assembly and that is why they prevented us from going there … they do not want them to hear us … but we will not stop here and [will] keep fighting against the exploitation, against labor trafficking.”

The event ended at the Philippine consulate with a candlelight interfaith vigil led by T’rauh and JFREJ, who expressed their deepest solidarity with the survivors of labor trafficking.