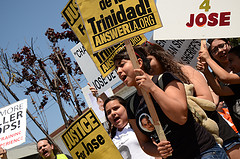 Jose, father of two, was murdered on November 10, 2012 in front of several eyewitnesses in the Willowbrook community, which is an unincorporated area of Los Angeles primarily comprised of Black and Latino workers nestled between Compton, Watts, and Lynwood. Jose stepped out of the passenger side of his brother’s vehicle in order to surrender after a short ‘pursuit’ was made by LA Sheriff officers Alexandro Gonzalez and Dan Cusiter. After Jose complied with orders to raise his hands up and move backward away from the vehicle toward the officers he was shot seven times in the back.

Saturday, April 20th was the second march held to demand justice for Jose and included Jose’s family, ANSWER Coalition and local organizations such as Women Organized to Resist and Defend, Nidas Rydas, United Survivors of Anaheim and the Youth Justice Coalition. Protesters began with a moment of silence at the direct site of Jose’s murder and followed with a march trailing through the Watts community in major thoroughfares, shutting down a portion of Imperial Highway. The community marched taking over the streets for over 2 miles. Local community members came out of their homes in support, joining in chants, as did commuters who stalled traffic to trail alongside the march.

The march ended at the Lynwood substation of LASD which doubles as the Women’s Central Jail in the Los Angeles area with speeches from organizers and victims of police brutality. Rosie de la Trinidad, Jose’s widow, demanded that the officers culpable for the murder of her husband be arrested and charged with his murder while vowing to continue to strengthen the movement in unity with other victims of police brutality.