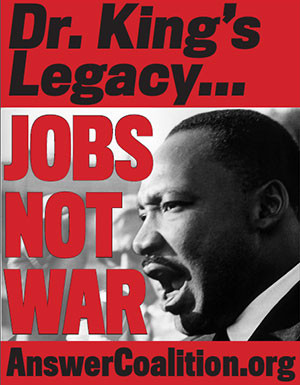 Today, Martin Luther King Jr.’s name has become synonymous with the entire Civil Rights Movement, and that movement has been portrayed as just another chapter in the unfolding story of constant American progress. Unfortunately, he is rarely remembered for his evolving critique of the U.S. economic system, his dedication to uplifting the poor and his view that mass social movements were needed to continue to transform society.

King did not cause the Civil Rights Movement. The Montgomery Bus Boycott, Greensboro sit-ins and 1963 March on Washington all would have happened without him. These heroic actions took place because of the mass awakening of the African American people. It was the people, the oppressed workers, rising up against the apartheid South.

The 1940s and 1950s witnessed a large-scale migration and urbanization of African Americans. This corresponded to a breakdown of the traditional sharecropping arrangements that Jim Crow segregation had served and reinforced.

In the north, where African Americans could vote, the growth of urban communities increased their political clout. In the South, this process concentrated new migrants into close-knit communities and led to the growth of independent institutions, such as the large urban churches. This is the context in which Dr. King and the other young pastors of the Southern Christian Leadership Council emerged.

The rapidly expanding movement used non-violent civil disobedience and the language of freedom to put a spotlight on the hypocrisy of the government’s Cold War rhetoric. At a time when the United States projected itself as beacon of democracy and individual liberty, the “Negro problem” became an international issue that demanded reform.

Thanks to a decade of tireless work, sharp confrontations and the physical sacrifices of millions—most of whose names will never be known—the Civil Rights Movement succeeded at dismantling Jim Crow segregation.

To date, there have been three revolutions in the United States—the American Revolution, the U.S. Civil War and the Civil Rights Movement, or what is better termed a Civil Rights Revolution.

The American Revolution was a political revolution that shed the country’s colonial status. While it unleashed some forces from below, it preserved the economic systems of chattel slavery and capitalism. The ruling phrase of the time was liberty, but women, African Americans, non-property-owning whites and Native Americans—who were largely slaughtered by pillage, plunder and disease—were excluded from the calls for equality and freedom.

The U.S. Civil War was a social revolution that smashed slavery. Rather than being a purely political transformation, the social and economic relations were overturned in half the country. Slave owners were stripped of their “property,” as African Americans won the basic human dignity to control their own bodies. During the Reconstruction period, from 1867 to 1877, the old slaveocracy was deprived of political power while African Americans became a decisive political force in the South for the first time.

The overthrow of Reconstruction led to the construction of a new Jim Crow segregation system aimed at depriving Blacks of social, economic and political rights, and preventing any sort of unity between Black and white sharecroppers and farmers. It represented a full-scale political counterrevolution, characterized by fascist Klan terror against anyone who crossed the line.

It took the Civil Rights Revolution nearly a century after Reconstruction to destroy Jim Crow’s rule and re-establish the full citizenship rights of African Americans.

Today, King is remembered primarily for stressing the need for civil rights for Blacks, but he constantly fused the concept of legal equality with the rights of workers and the poor. He frequently pointed to three universal problems in the United States—war, racism and poverty.

He became particularly involved in the sanitation workers strike in Memphis, Tenn., where he was assassinated. At that stage, King was trying to organize a Poor People’s Campaign to address the massive poverty and inequality for all people in the United States.

King’s opposition to the war in Vietnam is often omitted—particularly by those pro-war politicians who like to claim his legacy. King said, “I had to speak out if I was to erase my name from the bombs which fall over South and North Vietnam. The time had come, indeed it was past due, when I had to disavow and disassociate myself from those who, in the name of peace, burn, maim and kill.”

King’s ideas and positions have been stripped of their potency. Officially, he is only remembered for having a dream of a “color-blind” country. In fact, he had an expansive definition of justice for Black people and all poor people, and a vision which would force this country to reckon with and pay for its historic crimes.

Russian revolutionary V.I. Lenin once remarked: “During the lifetime of great revolutionaries, the oppressing classes constantly hounded them, received their theories with the most savage malice, the most furious hatred and the most unscrupulous campaigns of lies and slander. After their death, attempts are made to convert them into harmless icons.” This applies well to Dr. King.

Some dismiss King for what appear to be moderate tactics. They point to how his leadership was surpassed by the growing radical and militant trends in the late 1960s.

But this often misrepresents or crudely generalizes his political ideas. King was dealing with practical issues of how to build a movement. His critics often fail to account for the difficult odds facing the movement in the South and the Cold War climate in which he emerged, and leave little space for his own political evolution. They forget just how radically the Civil Rights Movement shook U.S. society.

In fact, King can be considered revolutionary in his own right, insofar as he led a political revolution in a particular phase, and attempted to push it further.

After the Civil Rights Act was passed, he emphasized how far the country still was from real justice, asking, “What good does it do to sit at the counter when you cannot afford a hamburger?” He was ridiculed for trying to advance the political direction of the movement by calling for more direct action, and dealing directly with economic issues.

If we can digress for a moment to think of today’s anti-war movement, we see how the ANSWER Coalition (Act Now to Stop War and End Racism), for instance, has adjusted its slogans over time according to the political mood and consciousness of the masses.

Right after the Sept. 11 attacks, ANSWER’s main slogan was “War and racism are not the answer,” which today may seem quite moderate, but it was tailored to the context of a repressive, pro-war hysteria and the consciousness of that moment. A little later that slogan became “Stop the War on Iraq Before it Starts!” After the war began, some “anti-war” groups believed occupation troops had an obligation to stay in Iraq; in contrast, ANSWER emphasized, “End the Occupation—Bring All the Troops Home Now.”

The movement against the war in Iraq developed into a movement against the occupations of Iraq, Palestine and imperialism altogether. Based on the real-life experiences of a decade of war, many people now see the war is not tied to a particular political party but instead to a system that makes profit from weapons and is addicted to war.

Brian Becker elaborated on this point in a piece titled “Civil Rights and the U.S. Revolution” (published in the PSL's Socialism and Liberation magazine) when he wrote: “Human consciousness, including political consciousness, is perhaps the most conservative aspect in the historical process. Revolutions don’t start because of the 'advanced consciousness' of the participants who start the revolutionary process. Consciousness changes and grows in the struggle, based on the conditions of life.”

Dr. King was dangerous to the political establishment because he started to draw the connection between different struggles and unite them against a common enemy. We cannot protest the war in Afghanistan and forget the racist laws directed at the immigrant community; we cannot fight for women’s rights and not speak to the need for full equality for the LGBT community.

Today the struggle against racism is taking a new direction. A new movement exists in the Latino community that is standing up to the country's many immigrant bashers and demanding full rights for immigrants. In the past three years, hundreds of thousands of Latinos have protested the assault on their family and friends. Supporting this movement is honoring King’s legacy.

In King’s famous Drum Major speech, he said he wanted to feed everyone. He did not mean personally or in soup kitchens—he meant fighting poverty at its root. Here in Washington, D.C., the D.C. Council is taking a vote to cancel assistance to anyone who has received aid from the Temporary Assistance for Needy Families program for more than five years. According to the Washington Post, this will remove 8,000 families from the program. Fighting to expand such social programs is honoring King’s legacy.

When we remember Dr. King, we should remember him not as a speaker at a rally or leader in a demonstration. He was a man attempting to connect the various forms of oppression into a single struggle against social injustice. The only way to remove that injustice is to remove the foundation from which it grows. So let us remember this leader of the Civil Rights Revolution by talking about what it will take to build the next American revolution.