Sign Up: A Week of Mass Outreach for Ramarley! 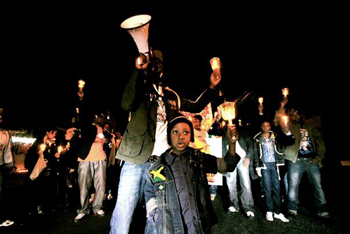 The Mother's Day Vigil for Ramarley Graham concluded with a rally outside the 47th Precinct in the Bronx.

To build support for this Thursday's vigil demanding justice for Ramarley Graham, ANSWER is helping to coordinate a week of mass flyering throughout the city.

We already have many locations set up, and with your help, we can make sure that all of New York knows of Ramarley and the fight against police brutality. Click here to sign up to volunteer for the Week of Mass Outreach.

The Thursday vigil will be held outside the home where the NYPD killed Graham, at 229th St. and White Plains Road, from 5pm-9pm. Take the 2 train to 225th St. It will be followed by a march.

In early February, New York City police officers charged into the home of Ramarley Graham, without a warrant, shooting and killing the unarmed teenager in front of his watching grandmother. Graham’s 6-year-old brother was close by.

The police claim they saw a gun — the line that they always use to get away with murder — but there was none. Officers had followed Graham from outside his home and then barged into his home, guns drawn.

Graham’s family and community members have been rallying in the hundreds for weeks, demanding that his killers be brought to justice. But, as is the case with so many incidents of police brutality and murder, the officers have not been charged.

The NYPD says they are “investigating,” but in reality they are hoping to sweep this case under the rug.

We can’t let that happen. A national movement made Trayvon Martin a household name, and forced the authorities to prosecute his killers. Now we must do the same with Ramarley Graham and all the victims nationwide of police brutality.

Ramarley Graham was a young man, with dreams and aspirations, when his life was stolen. He is remembered by his family as a loving and compassionate soul.

He is gone, but it is up to all of us to make sure he is not forgotten. We need justice!

If you have not yet signed the letter, please take a moment  to send a Letter to D.A. Robert Johnson demanding Officer Richard Haste be prosecuted for murder!