Mass protests in Tunisia carry on legacy of revolution 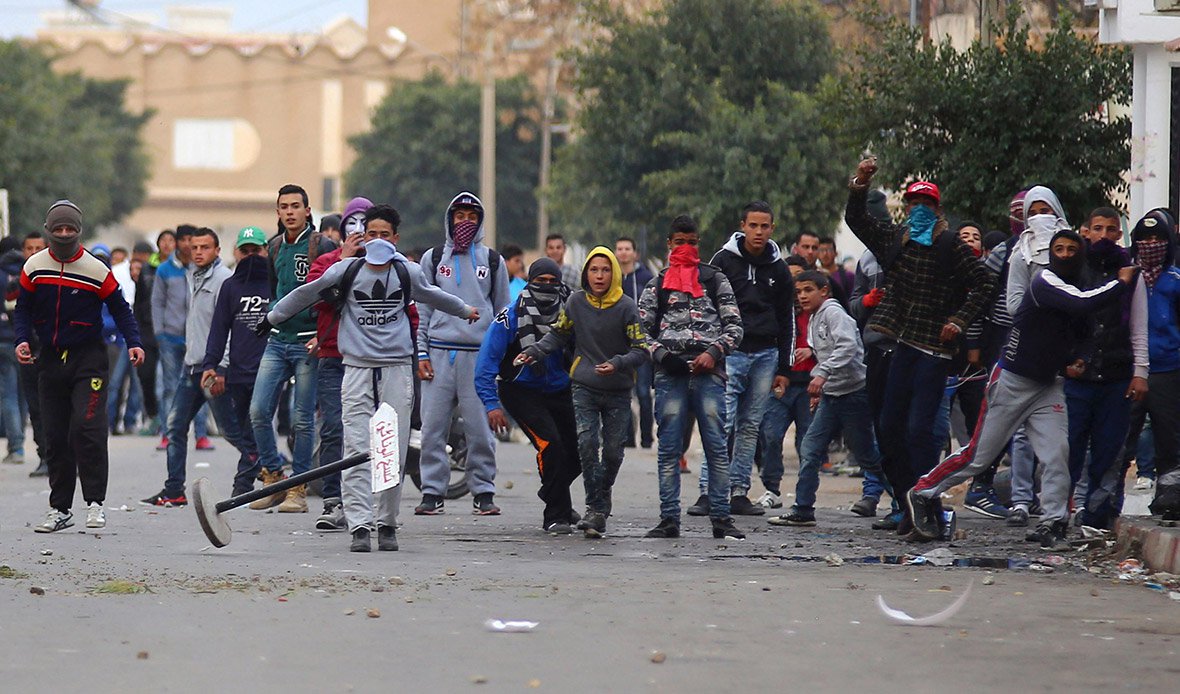 An indefinite state of emergency continues in Tunisia as of the time of this writing, where widespread, militant demonstrations have shaken the political establishment and reinvigorated the struggle in the birthplace of the Arab Spring uprisings. Beginning Jan. 22, the government imposed a nighttime, nationwide curfew. The demonstrations began after unemployed youth Ridha Yahyaoui committed suicide January 16, protesting the hopelessness of his situation in the same way Tunisian national hero Mohamed Bouazizi did in 2010.

The wave of protests are mainly attended by youth, who are the hardest hit by the chronic unemployment crisis that has gripped the country for years. The most intense actions have been taking place in the southern interior of the country, where mining and other industrial jobs have long been in decline. The region has been neglected by the country’s ruling elite, who are based primarily in the coastal north – although protests have spread to the capitol Tunis as well.

The government of Prime Minister Habib Essid and President Beji Caid Essebsi, both former officials of the regime overthrown in the 2011 revolution, has unleashed serious repression against the demonstrators. However, even the loyalty of the police force is in question as thousands of cops protested in front of the Presidential residence Jan. 25 over pay and job conditions. The government is simultaneously exploring avenues for a negotiated solution to the crisis with various parties and organizations.

Tunisia has been held up in the bourgeois media and civil society as the success story of the Arab Spring. While other countries have descended into chaos or reverted to dictatorship, the narrative goes, Tunisia alone successfully traversed the “transition to democracy.” The country’s National Dialogue commission was even awarded the Nobel Peace Prize last year.

The misery of the unemployed youth, which has now erupted in the streets yet again, exposes this myth. The Tunisian people won many important gains in the field of democratic rights in the 2011 revolution along with the departure of the pro-imperialist dictator Ben Ali. However, the Arab Spring’s core demand for “bread, freedom and social justice” remain unfulfilled.

The political system of Ben Ali’s regime is largely gone, but the social system of capitalism is very much in place. The country’s post-revolution governments have pressed ahead with the neo-liberal reforms that helped spark the Arab Spring, including regressive taxes and subsidy cuts. Much of this is related to a $1.8 billion loan the country took out from the International Monetary Fund in 2013. The country’s economy has also been hit by the imperialist-instigated civil war in neighboring Libya, which has led to several deadly terrorist attacks that badly damaged the important tourism sector.

In the 2011 Constituent Assembly and 2014 parliamentary election campaigns, politicians from various parties pledged to bring relief to the country’s youth and the youth of the south in particular. Frustration with these broken promises is now spilling over.

The mass protests have heightened the contradictions in an already-tense Tunisian political scene. Before they began, the ruling Call of Tunisia party was coming apart at the seams. The party was an awkward partnership from the start, assembled in 2012 and gradually expanded on the basis of common hostility to the then-ruling Renaissance Party, which is ideologically aligned with the Muslim Brotherhood’s brand of center-right pluralist political Islam.

Call of Tunisia’s founder, now-President Essebsi, was a member of Ben Ali’s party and the Foreign Minister under his predecessor. Many supporters of the former regime have rallied to his banner, similar to how Mubarak supporters have regrouped around General Sisi in Egypt.

However, the party also counted many prominent leftists among its supporters, including activists of the UGTT labor union confederation and a former leader of the Communist Party of Tunisia. In much of the Middle East, the left is in an existential struggle against religious forces that posture as champions of the anti-imperialist struggle but maintain deeply reactionary positions on economic and social issues. Many in Tunisia saw an alliance with former regime officials as a necessary maneuver to remove the Renaissance Party from power.

With their common enemy sidelined and the social crisis deepening, Call of Tunisia began to disintegrate, reaching a full scale split at its General Conference in November. The party’s Secretary General, Mohsen Marzouk, resigned and announced the creation of a new organization called Current of Reconstruction. Marzouk, a former leader in the student movement who faced severe repression at the hands of the old regime, was perhaps the most senior leader of the left wing of Call of Tunisia.

Since Marzouk’s resignation, nearly one-third of the party’s lawmakers have followed suit and set up an independent parliamentary group. This new formation may be able to find a base of support among participants and sympathizers with the recent upsurge in struggle. At the very least, both find their source in the same contradiction between progress in the field of political rights and the further erosion of economic rights.

Forces of the revolutionary left wing continue to search for a way forward as the revolt against unemployment continues. The largest left formation in the country is an alliance of Communist and Pan-Arab parties called the Popular Front, which saw two senior leaders assassinated at the hands of right-wing religious forces in 2013. The Popular Front is calling for an extraordinary tax on the rich and the suspension of debt payments to foreign creditors for three years.

It’s not the self-congratulatory pronouncements of the world’s elite, but the heroic resistance of thousands of protesters that shows that the spirit of Tunisia’s Arab Spring revolution is still alive. There is ebb and flow in all movements, but the Tunisian people have demonstrated that they will never abandon the struggle for bread, freedom and social justice.