Why we are demonstrating to Shut Down Guantanamo Now 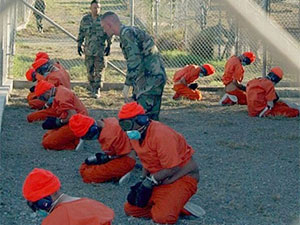 The Obama administration continues to incarcerate and torture (i.e., force feed) prisoners at Guantanamo who are conducting a hunger strike that has entered its third month.

At 5:00 p.m. on May 18 people will be rallying together at the White House to demand that Guantanamo Prison be Shut Down Now!

If you cannot come to the demonstration, you can make an important contribution and show your support by making an urgently needed tax-deductible donation today.

It is a demagogic ploy by the president to again publicly call for the eventual closing of the Guantanamo torture center while not using his presidential authority to act now.

The hunger strikers have been held for more than a decade without trial. They prefer death to indefinite detention after years of brutal treatment and torture.

Of the 166 prisoners at Guantanamo, 86 were cleared for release by the president’s own interagency Task Force as of January 2010. But the president hasn’t released them so they can join their families after this decade-long nightmare.

Instead, the Obama administration resorts to brutal force feeding techniques to keep the prisoners alive. This is political too. The administration won’t close Guantanamo but wants to avoid the embarrassment of more suicides at the world’s most notorious torture chamber.

The UN human rights office has condemned force-feeding hunger strikers at Guantanamo Bay, calling it ‘torture’ and a breach of international law. The American Medical Association also issued a statement condemning the practice.

Even the chief prosecutor for the terrorism trials at Guantanamo Bay said: “If any other country were treating prisoners the way we are treating those in Guantanamo we would roundly and rightly criticize that country.”

On May 18, 2013, people all over the world are taking part in an international fast in solidarity with the hunger strikers at Guantanamo.

Join this important demonstration on May 18. Tell your friends, family members and neighbors to take a stand and join us that day.

Please make an urgently needed tax-deductible donation today in support of the May 18 action to Shut Down Guantanamo Now.