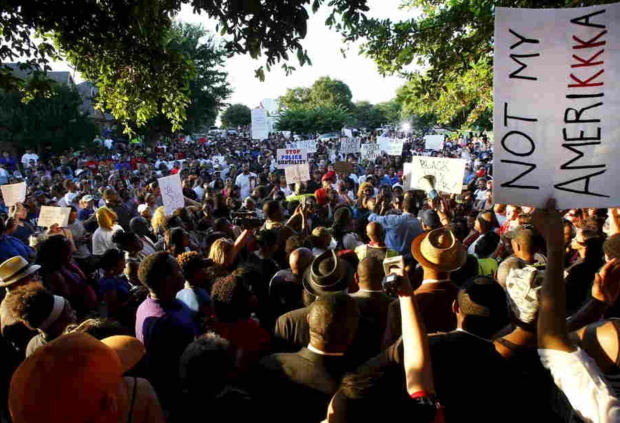 The video emanating out of McKinney, Texas—of a young Black woman being attacked by a rabid police officer, who also pulled a gun and threatened other Black teenagers attending a pool party—has scandalized the nation. Again.

Racists are trying to muddy the waters as usual. There is currently a swirl of conflicting testimony around events leading up to the video-recorded brutal assault. Quite frankly, all the discussion of who had the right to be where at the pool party is secondary.

What is 100 percent clear is that Corporal Eric Casebolt, when there was no threat, had an altercation with a group of young Black women, forcefully telling them to leave and to stop talking back at him.

One young woman, conscious of her right to exist, was more defiant than Officer Casebolt saw fit to allow. He dragged this woman by her arm back to a central location in view of dozens of bystanders and wrestled her to the ground, including pulling her hair. He put his knees in her back, subdued her with her arms behind her and held her in that position for a number of minutes, falsely asserting that she was fighting back.

That right there should be enough to put Casebolt in a prison cell.

That he may not end up in one is just another sign of the gross injustice that has sparked a mass uprising against racism.

The fact that Officer Casebolt did everything in full view of dozens of witnesses and clearly on more than one camera speaks to the arrogant impunity of the police. That the punishment for talking is a brutal assault can only take place in an immensely bigoted atmosphere. The speed with which the defenders of police terror are rushing to portray this as a “ghetto party run amok” speaks to this very fact. The racist demonization of the Black poor creates the context for wanton brutality in the name of “law and order,” and the legal system provides the cover to assure a sense of impunity.

The context in which we consider McKinney is important. It is at a crossroads where the Black Lives Matter movement has captured the attention of the world but falls on deaf ears in the legislatures. The first Black president puts more lobbying time in promoting the Trans Pacific Partnership on behalf of billion-dollar corporations than he does on any of the bills sitting dormant in Congress on police reform issues.

We are faced with whether we will continue to treat this as an issue of laws, even as police departments routinely flout their own policies and procedures in pursuit of hyper-militarized bigoted policing, or whether we will begin to recognize the problem is the law itself. McKinney isn’t a symptom of unjust laws, it is a symptom of an unjust system, one where racism and poverty are essential to its existence and where the reality of plutocracy reveals itself on a day-to-day basis through the actions of politicians.

The issue isn’t whether the party goers were or were not supposed to be there. It is that a young Black woman was brutalized just because she refused to be docile in the face of abused authority. Either that will be allowed in this country or it won’t.

McKinney is another rallying point in our struggle, which we must intensify, to uproot racism. We are beyond individual incidents now; there are already too many to count. We have to turn our struggle into a transformative assault on the system, not simply seek ways to tweak the status quo.