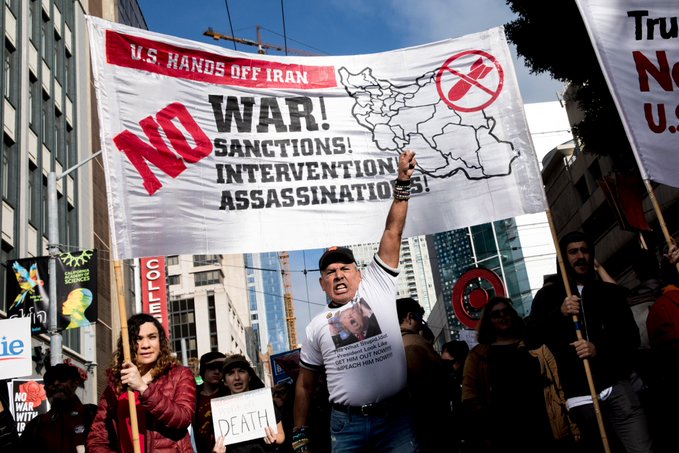 As the novel coronavirus COVID-19 continues to spread throughout the world, criminal economic sanctions imposed by the U.S. government are threatening to escalate a public health emergency into a full-blown catastrophe. U.S. sanctions have left the country without sufficient testing kits, ventilators, antiviral medicine and other life-saving supplies. While the World Health Organization, health care providers and human rights organizations have called for the lifting of the sanctions on humanitarian grounds, the U.S. response has been the opposite.

Secretary of State Mike Pompeo announced March 18 that the U.S. is increasing its sanctions on Iran, targeting nine entities and three people in order to  “deprive the regime of critical income from its petrochemical industry and further Iran’s economic and diplomatic isolation.”

The virus has spread to all 31 of the Iran’s provinces (which is notable for a country as geographically large as France, Germany and Spain combined), and as of March 21, Iran reported 20,610 infections and 1,556 deaths due to COVID-19. Those infected include Vice President Eshaq Jahangiri, ministers Ali Asghar Monesan and Reza Rahman, Deputy Health Minister Iraj Harirchi and 23 out of 290 members of the Iranian parliament.

The Iranian government has mobilized a national effort to combat the rapid spread of the virus.  The government formed a national committee, comprising a range of ministers and officials and headed by Health Minister Saeed Namaki, to lead this effort. It has closed schools and universities nationwide until the end of the Iranian calendar year on March 20; the state telecommunications ministry has developed an app so that people can register suspected infections.

Some 300,000 teams are mobilizing in schools, military bases and health centers, and  will set up over 26,000 new health centers in cities and villages across the country where suspected patients can be tested, monitored, and given medical care. Members of these medical teams have already been seen disinfecting taxi stations. Friday prayers have also been cancelled in cities across the country.

In an effort to reduce population density and prevent the spread of COVID-19 in jails, Iran has temporarily freed 85,000 prisoners, with judiciary chief Ebrahim Raisi announcing that the release of prisoners will continue “to the point where it doesn’t create insecurity in society.”

Despite Iran’s relatively high level of economic and social development, and despite the acknowledgement by the World Health Organization’s Director General Tedros Adhanom Ghebreyesus that Iran is doing all that it can to contain the virus, Iran is struggling to slow the spread of COVID-19 within its borders due to the U.S. sanctions.

Illegal U.S. sanctions are to blame

Since the 1979 Islamic revolution which replaced the right-wing U.S.-backed dictator Mohammad Reza Shah Pahlavi with a state run by Iran’s nationalist capitalist class, Iran has withstood numerous attempts by the United States government and its junior partners in imperialism to re-subjugate the country. Iran’s economy, despite being predicated on the exploitation of its working class, has been able to achieve significant growth through the nationalization of key industries, including oil production, which has resulted in economic independence, high literacy rates and long life expectancies for the people of Iran.

In 2011,  the U.S. and the European Union implemented  economic sanctions on Iran which locked the country out of the global trade system, severely disrupting the Iranian economy and causing the value of the country’s currency to plummet overnight. This in turn led to rampant inflation, a burden which was largely borne by the working class of Iran, which was what the architects of these sanctions intended.

Despite the severe economic disruptions created by these sanctions, Iran endured and in some ways flourished economically. Basic foodstuffs and medicines were widely and cheaply available. Commercial activity, including restaurants and shopping centers, continued at a robust pace. Much of this success can be attributed to the country’s diverse economy (the Iranian economy benefited significantly from but did not rely solely on oil exports), as well as tactics such as direct commodity bartering with other countries (since Iran was excluded from the international banking system) and selling oil through neighboring Iraq.

However, no country in the interconnected global capitalist economy can survive economic isolation forever. Iranian President Hassan Rouhani, sought a way to end these sanctions. In 2016 Iran signed on to the Joint Comprehensive Plan of Action.  The JCPOA recognized the right of Iran to enrich uranium for peaceful uses (a right guaranteed by the Nuclear Non-Proliferation Treaty but ignored by imperialist powers previously) and lifted many economic sanctions on Iran, including embargos on oil export and restrictions on the financial sector, in exchange for Iran sharply reducing its uranium enrichment activities. The lifting of sanctions allowed Iran’s economy to grow tremendously, with the country’s GDP increasing by 12.3 percent in 2016.

The JCPOA represented a strategic shift in the U.S. ruling class from a policy of naked economic aggression to a more refined and diplomatic flavor of imperialism. This shift was reversed dramatically with the ascension of the brutish wing of the U.S. ruling class embodied by Donald Trump. In 2018, the U.S. government decided to unilaterally (i.e. without the consent of its European imperialist partners) go back on its word and reimpose sanctions, particularly those targeting the financial, energy and shipping sectors of the Iranian economy.

As a result, Iran’s economy contracted 9.5 percent in 2019, and inflation rates soared to 35 percent. These sanctions are an act of warfare in the economic sphere. The goal  is to weaken the Iranian economy to the point where Washington can instigate the overthrow of the Iranian government and replace it with a puppet regime friendly to infiltration by Western capitalist firms.

It is precisely the economic isolation and weakening of Iran which have rendered it incapable of fully containing the surge of COVID-19 infections. The extensive financial restrictions which U.S. imperialists unilaterally forced upon Iran have made it very difficult to rapidly increase the supply of key medical supplies. As Foreign Policy Magazine (a media outlet which is not exactly known for its friendly coverage of oppressed nations) notes, respiratory masks, disinfectants, and medication are in high demand, while pharmacies and merchants are low on supply. U.S. sanctions have left importers and factories unable to fill the gap.

Capitalist corporations work in tandem with their respective governments to implement these sanctions. For example, Google removed Iran’s  self-diagnosis and infection registration app from its app store with the justification that “Developer accounts from Iran are not allowed on Google Play.”  This app would have reduced the burden placed on Iranian hospitals and made it easier for Iranian people to self-isolate, but the enforcement of sanctions by massive capitalist firms like Google has made this impossible.

Western non-governmental organizations (NGOs) are enforcing these imperialist sanctions as well. United Against Nuclear Iran, an organization with close ties to the Trump administration and which purports to have “a long history of expressing support and solidarity with the Iranian people,” is in fact conducting a campaign to stop pharmaceutical companies from exporting medical supplies to Iran under a “humanitarian exemption.”

To add insult to injury, the U.S. government has paid lip service to providing humanitarian aid to Iran — as if  token offers could possibly make up for the devastating effects of their illegal sanctions! As one Iranian political scientist said, “the U.S. government wants to take credit for small humanitarian gestures, while it continues to slap Iran with hurtful sanctions that restrict outside assistance to Iran. It is like someone stabbing you constantly with a huge knife and offering a small bandage.”

The spread of a global pandemic is exposing these sanctions for exactly what they are: an act of war designed to brutalize working people in an effort to overthrow governments that refuse to submit to Western hegemony. This was the case in 1973 when the U.S. government used sanctions to (in the words of Richard Nixon) “make the economy scream” in Chile before launching a bloody coup d’état against the  democratically elected  government of Salvador Allende.

It was the case in 2003 when the U.S. government had devastated the Iraqi economy with more than a decade of sanctions which killed upwards of 1 million Iraqis, most of whom were children, due to lack of access to food, medicine and basic sanitation. And it is the case now in Iran, where brutal sanctions are making it nearly impossible for the Iranian health care system to address the COVID-19 pandemic at the cost of hundreds and perhaps soon thousands of lives.

Just as COVID-19 is exposing the  brutality of U.S. sanctions on Iran, it is also laying bare the many flaws of the capitalist system right here in the United States. The profit-driven economic system in  the U.S. leaves working people here vulnerability to contagions like COVID-19. We are told to stay home from work if we are sick to reduce the risk of spreading the virus, but this  is impossible for many  when 40 percent of us are one missed paycheck away from poverty and seven-out-of-10 low-wage workers (42 percent of the U.S. population) have no sick pay. The situation is even worse when we become sick enough to need medical attention as every year as 530,000 families file for bankruptcy because of unpayable medical bills.

This extreme economic precarity is a symptom of the disease known as capitalism. The wealthy politicians and CEOs who wage endless wars and impose economic sanctions on countries like Iran are the same politicians and CEOs who deny working people in the United States access to health care and paid sick leave. A system of universal health care available to everybody residing within the US would clearly benefit everyone and would make it possible to effectively combat the spread of COVID-19, but the capitalists that both the Democratic and Republican parties answer to have created a health care system in which an amorphous mass of privately owned insurance companies, drug developers and hospitals seek profit above all else.

The  crisis of COVID-19 making its way through Iran, and through the United States as well, is being exacerbated by the greed of the U.S. capitalist class which seeks profit through exploitation of the working class at home and across the world. If capitalism is the disease, then socialism is the cure. Only when working, poor and oppressed people (the vast majority of society) are in full control of the economic and political spheres can we end this inhuman exploitation.

A socialist response to the pandemic which puts people over profits, can be seen in the emergency response program laid out by the Party for Socialism and Liberation and its La Riva/Peltier presidential campaign: full pay and benefits for anybody who cannot work during the crisis, a moratorium on evictions and rent hikes, housing the 500,000 people experiencing homelessness in the 17 million empty homes in this country and so much more.