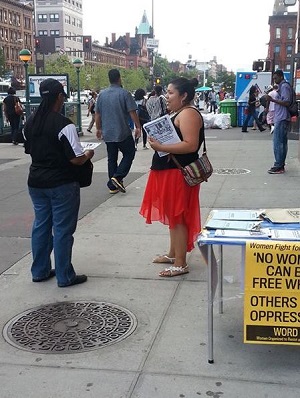 Last weekend, Washington, D.C. WORD organizers joined with DMV LOLA (Latinas Organized for Leadership and Advocacy), and NAPAWF-DC (National Asian Pacific American Women's Forum) for a unity rally at the White House demanding immigrant rights. With chants like, "1,2,3,4, Deportation no more!" and "El pueblo unido jamas sera vencido," the rally sent a strong message of unity and commitment to the struggle for full rights for immigrants.

Please make an urgently-needed donation today to support this new women's movement led by the next generation of feminists. We have volunteers, enthusiasm and commitment, but we also need funds. Make your tax-deductible donation today.

On August 23-26, WORD is calling for nationwide demonstrations in honor of Women's Equality Day to stop the right-wing attacks targeting women’s rights and the rights of all oppressed people. On the East Coast, WORD is mobilizing a contingent to participate in the march and rally commemorating the 50th anniversary of the March on Washington in Washington, D.C.

Outreach teams are hitting the streets to spread the word about nationwide protests August 23-26 to celebrate Women's Equality Day and the 50th Anniversary March on Washington. This weekend, nationally coordinated demonstrations begin across the United States. From coast to coast, women and allies are building the movement to defend our rights.