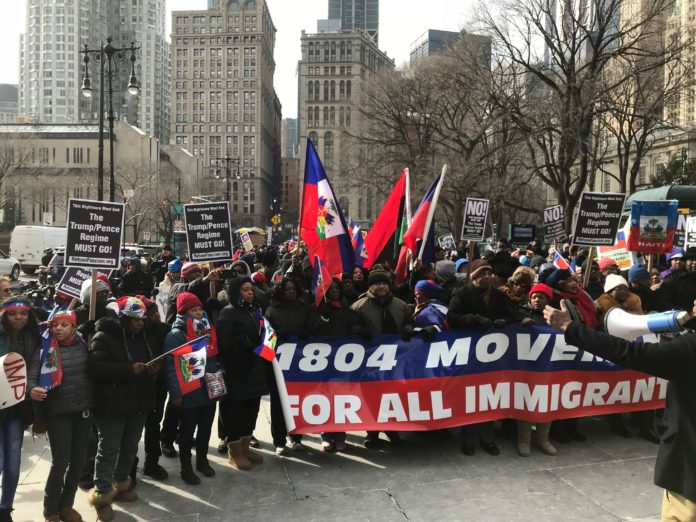 Last week, the Trump administration stripped Temporary Protected Status (TPS) from 57,000 Hondurans who have lived in the United States for the past two decades. Those Hondurans have about 53,000 U.S.-born children, many of whom may also be forced to return to Central America with their parents.

On May 19, 2018 from 12:00 to 4:00 p.m. in front of the White House, Haitians, Africans, Latin Americans, and North Americans will demonstrate to demand permanent residency in the U.S. for the tens of thousands of TPS holders soon to be facing deportation. Their expulsion is inhumane and counter-productive. They hold jobs, run businesses, attend schools, pay taxes, and generally contribute to the economic health of the U.S..

The rally will also demand that President Donald Trump apologize for calling Haiti, El Salvador, and African nations “shithole countries,” that U.S. police forces stop profiling and terrorizing black and brown communities, that UN police be withdrawn from Haiti, that the U.S. and UN pay reparations to Haiti for a century of crimes and exploitation (most recently the UN’s importation of cholera into the country), and that Washington stop meddling in Haiti’s elections.

There has not yet been a major demonstration in Washington, DC to denounce Trump’s gutting of TPS as a part of his campaign to stop and expel black and brown immigrants from coming to the U.S.

The rally is being organized by the 1804 Movement for All Immigrants, a broad coalition of groups which organized a spirited march of 1,000 across the Brooklyn Bridge to Wall Street’s Trump Building on a bitterly cold Jan. 19, a mere eight days after Trump’s “shithole” remarks.

Washington is forecast to have beautiful springtime weather on May 19, with temperatures in the mid-70s.

“There has not yet been a major demonstration in Washington, DC to denounce Trump’s gutting of TPS as a part of his campaign to stop and expel black and brown immigrants from coming to the U.S.,” said unionist and teacher Marie Paule Florestal, one of the key organizers of the May 19 rally. “We are going to fill Lafayette Park and Pennsylvania Avenue right in front of the White House with our banners, placards, and voices to tell Trump and the world’s media that his racist policies will no longer be tolerated. Our Haitian ancestors defeated Napoleon Bonaparte when he tried to reestablish slavery in Haiti. Today, we will stop Trump from turning back the clock to the days of Jim Crow, lynchings, and immigrant demonization.”

The May 19 rally has the support of the Family Action Network of Miami (FANM) and Veye Yo in South Florida, who are working to raise the money to fly representatives to the rally. The Boston Bus Drivers Union, the New England Human Rights Organization (NEHRO), and the Institute for Justice and Democracy in Haiti (IJDH) are mobilizing people in the Boston area. Meanwhile, in Washington, DC, Konbit Lakay and Fondasyon Mapou also support the rally and are working to turn people out. Organizers expect to have delegations from cities up and down the U.S. East Coast.

While many people are traveling to Washington, DC by car and train, charter buses have already been organized from New Jersey and New York. There are still free seats on one of the buses leaving from New Jersey, and tickets for the buses from New York start at $40 for the round-trip, although there are discounted and free tickets for students, unemployed, and elderly.

You can also visit the 1804 Movement for All Immigrants’ website at 1804movement.org or its Facebook page at www.facebook.com/1804Movement.

The organizers for the May 19 Rally in DC still need financial support for buses and other rally expenses. If you can help in any way, please contact the 1804 Movement for All Immigrants at 718.421.0162 or contribute online at https://t.co/Vm14tmvOfV.