Stand with postal workers: More than 125 events on Nov. 14

The following call to action is taken from the website of the American Postal Workers Union. The ANSWER Coalition encourages all of its supporters to participate in these important events. 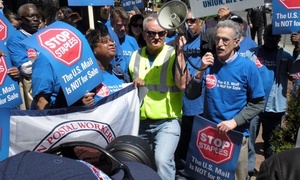 On Nov. 14 postal employees from every craft in more than 125 locations will send an urgent message to Postmaster General Patrick Donahoe and the USPS Board of Governors: Stop Delaying America’s Mail!

Donahoe and the Board are poised to make devastating cuts in service to the American people – cuts that would forever damage the U.S. Postal Service.

This is the same misguided thinking that’s behind efforts to end Saturday and door deliveries, cut back post office hours, and make other reductions in service.

Degrading service would hurt residents, small businesses and communities across the country – and eventually destroy the Postal Service by driving away customers.

And it’s not necessary. In fiscal year 2014, the USPS earned more than $1 billion in operating profit, and its finances have been improving for four years.

On Nov. 14, the Board of Governors will hold its final public meeting of the year. "The four postal unions are joining forces to protect service, fight for our livelihoods, and defend our great national treasure, the U.S. Postal Service," said APWU President Mark Dimondstein. "We have many allies in the fight against the proposed changes, including more than half the Senate and 160 U.S. Representatives," the union presidents said.

For an event near you, click here. For more information, visit www.StopMailDelays.org.