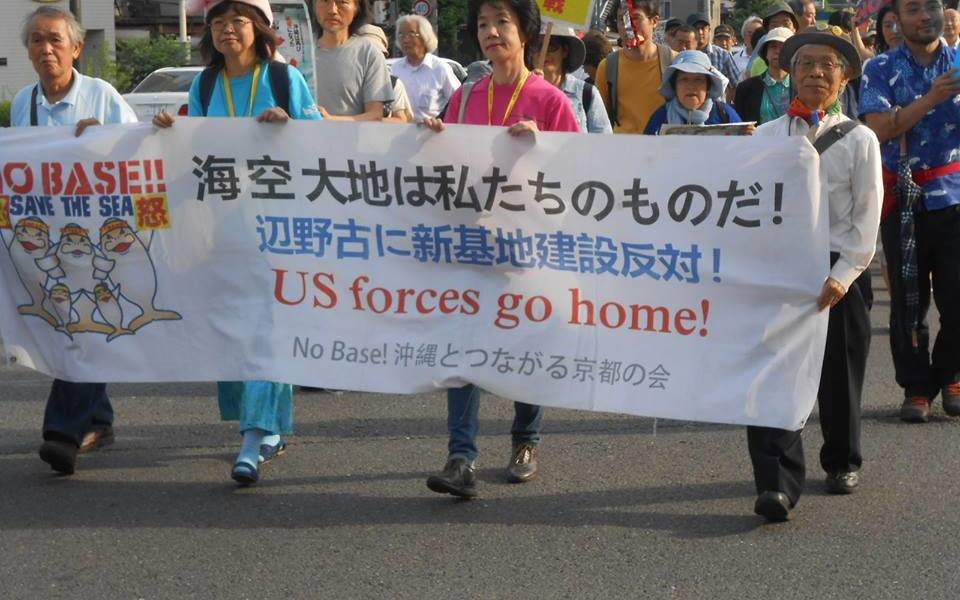 The following protest statement was issued by AWC-Japan in response to government repression.

On June 4, 2015 Osaka prefectural police arrested 3 activists in the Kyoto/Kinki Coalition against the U.S. X-band radar base under the pretext of the ‘alleged violation of the Road Transportation Law’. Members of AWC-Kyoto were also included among these arrested activists. The police also raided 17 offices and houses in total in Kyoto, Osaka and other areas on June 4-5.

Last September 28, 2014 the Kinki Coalition held a protest action to oppose the U.S. X-band radar base in Kyotango city, located in the northern part of Kyoto prefecture. At the time, people shared the expense of transportation and went to Kyotango city on a labor union-owned bus. The police insisted that it was a business to make money and that it violated the above-mentioned law. We can clearly understand that it is nothing but a political crackdown.

This was a crackdown that aims to oppress the expanding people’s movement against the U.S. X-band radar base in Kyotongo. At the same time, it was also repression against the people’s anti-war and anti-base movement in the whole Kansai region including the campaigns against building of the new U.S. base in Henoko, Okinawa and against Japan’s war-related bills (new security bills). 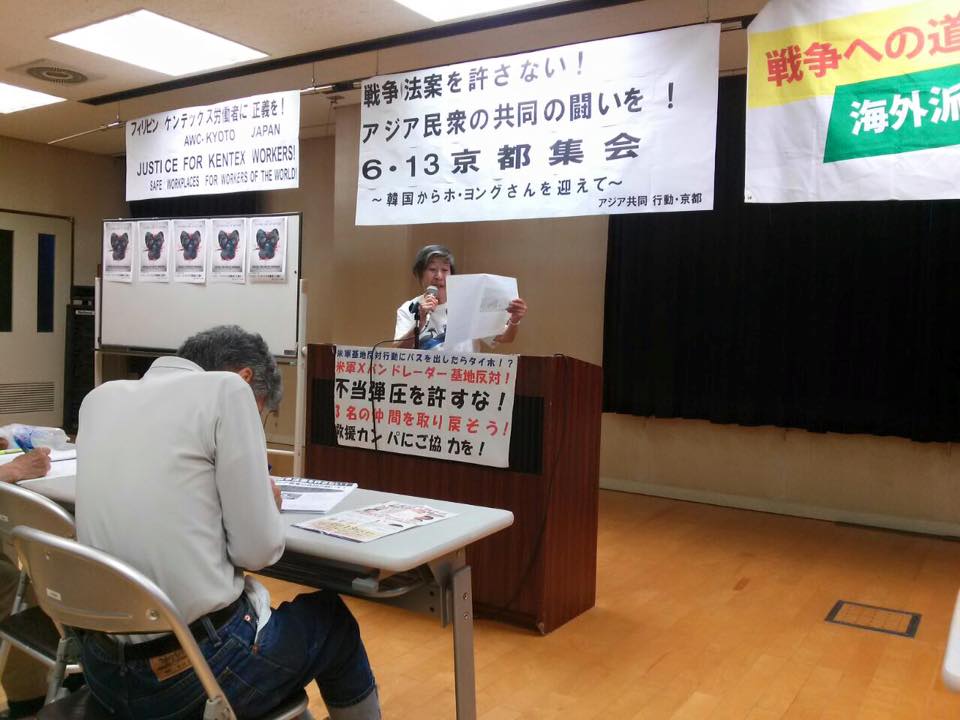 Members of AWC-Japan, along with the representatives from AWC Korea Committee and the Left Workers in South Korea, joined the actions to stop the Abe administration’s promotion of new security bills held in different cities over the week. 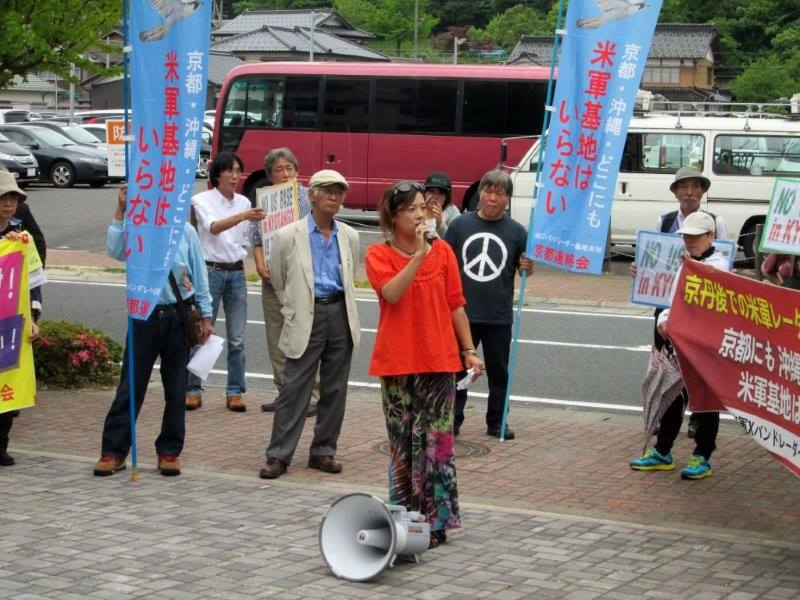 In spite of the recent crackdown, the Kyoto/Kinki Coalition against the U.S. X-band Radar Base held a full day action at Kyotango-city in Kyoto prefecture, where the newest U.S. base in Japan had been built.

It was a weekday but around 50 people took the trip to Ukawa district, where the U.S. base is just located, via central Kyotango by bus and cars. They held the protest at Kyotango City Hall, protesting the Kyotango city authority that has ignored people’s demand and accepted the U.S. base there. And then, the group finally held a protest at the base site. It takes over three hours by car from central Kyoto to Ukawa district.

Comrades from South Korea also joined the activites. The X-band radar in Ukawa, Kyotango and the THAAD missile that U.S. forces plan to deploy in South Korea will be linked in one U.S. Missile Defense network. 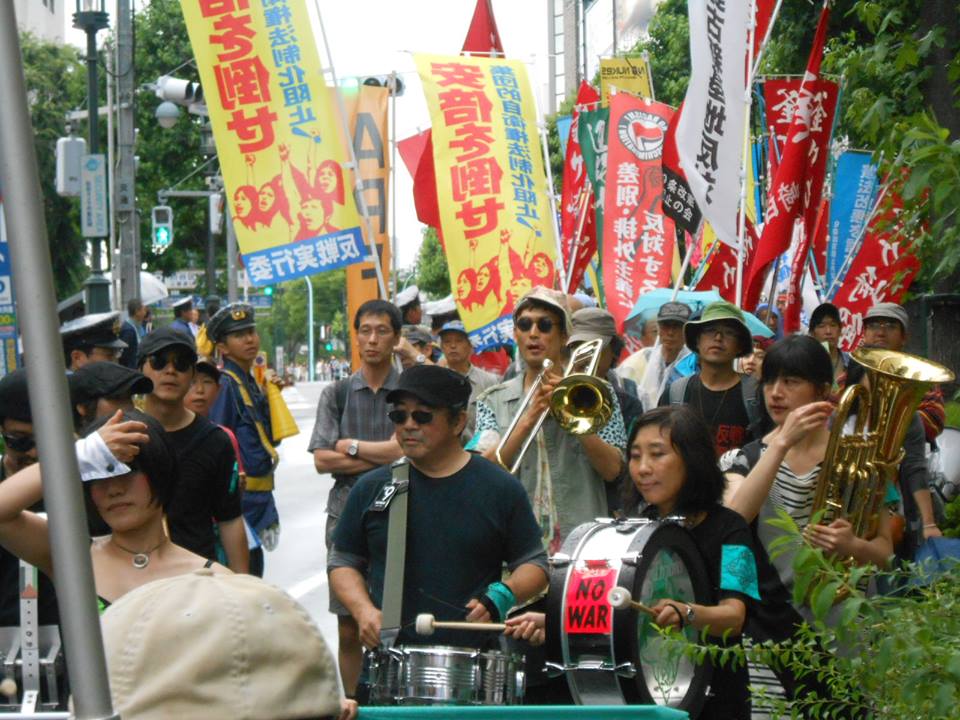 A leftist alliance within the  people’s movement held a demonstration around Sibuya, Tokyo.

Militant activists need to organize people toward an anti-imperialist line through their devoted efforts in the popular movement against the new security bills.