How the FBI spied on Occupy Movement 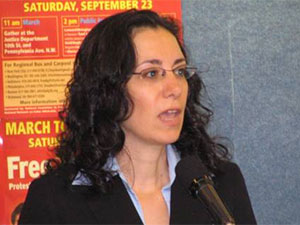 We encourage you to tune in to Democracy Now (online at www.DemocracyNow.org or check here for your radio and television listings and time) to hear Mara Verheyden-Hilliard speak about the significance of the recent release of new government documents showing that the FBI targeted the Occupy movement all over the country.

Verheyden-Hilliard is a renowned civil rights attorney and the Executive Director of the Washington, D.C.-based Partnership for Civil Justice Fund.

From the web site of the PCJF:

FBI documents just obtained by the Partnership for Civil Justice Fund (PCJF) pursuant to the PCJF’s Freedom of Information Act demands reveal that from its inception, the FBI treated the Occupy movement as a potential criminal and terrorist threat even though the agency acknowledges in documents that organizers explicitly called for peaceful protest and did “not condone the use of violence” at occupy protests.

The PCJF has obtained heavily redacted documents showing that FBI offices and agents around the country were in high gear conducting surveillance against the movement even as early as August 2011, a month prior to the establishment of the OWS encampment in Zuccotti Park and other Occupy actions around the country.

“This production, which we believe is just the tip of the iceberg, is a window into the nationwide scope of the FBI’s surveillance, monitoring, and reporting on peaceful protestors organizing with the Occupy movement,” stated Mara Verheyden-Hilliard, Executive Director of the Partnership for Civil Justice Fund (PCJF).  “These documents show that the FBI and the Department of Homeland Security are treating protests against the corporate and banking structure of America as potential criminal and terrorist activity.  These documents also show these federal agencies functioning as a de facto intelligence arm of Wall Street and Corporate America.”

Sign up at www.JusticeOnline.org for more updates about this issue.

Please make a donation today to support the work of the PCJF
in defense of free speech, civil rights and civil liberties.