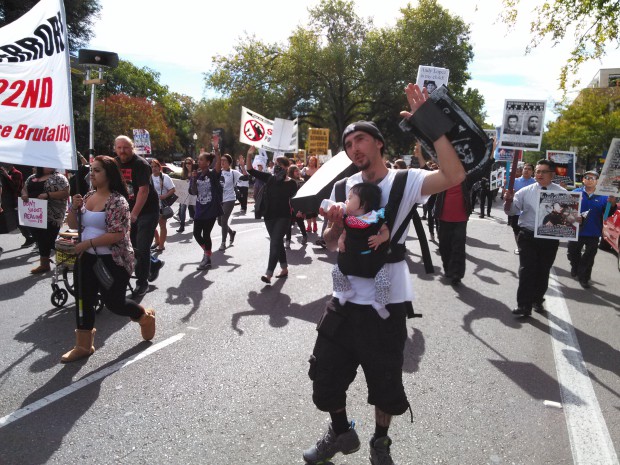 October 22 marked the National Day Against Police Brutality. For many years now, the day has been observed by protesters who are building a movement to fight back.

This October, people in many cities took to the streets. They organized protests, speak outs and marches. In Sacramento, the community organized a large protest that started on the front steps of the California State Capitol.

The protesters marched from the capitol, bringing the message to the wider community. The march shut down major downtown Sacramento streets which drew more attention to the cause against police corruption and brutality.

The march stopped in front of the office of Kamala Harris, the California Attorney General, to read from a list of the countless people who have been killed by California’s law enforcement. For each person murdered by cops, the protesters left a coffin at Kamala’s front door to point out her failure to even lift a finger to prosecute killer cops.

The march then went on to protest the county jail. The Sacramento jail is notorious for its blatant racism, corruption and mistreatment of its prisoners. The anti-police brutality protesters made speeches and explained how the system of mass incarceration is part of the same racist system that perpetuates police brutality.

A big part of the protest was the families themselves who have been victimized by police brutality. Some of those present were family members of Oscar Grant, Ernest Duenez, Jr., and AJ DeVellina, all innocent people slain by police who have not received justice.

This October 22 not only marked the national day against police brutality but also the one-year anniversary of the killing of Andy Lopez by Santa Rosa sheriff Erik Gelhaus. Special attention was given to Andy, and many of his friends led the march in his honor.

Protesters pointed out that police brutality is an epidemic that can not be stopped easily. We will need more actions and a stronger movement to win.

Meanwhile, we must be vigilant and aware that killer cops are still roaming our streets. Just as the protesters vowed to do, we must also stay prepared and determined to fight back against any new case of police terror. This is exactly what we plan to do in the coming days as we seek to build the movement.