National Day of Action Against the US War Machine 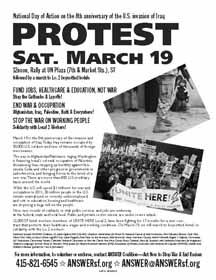 STOP THE WAR ON WORKING PEOPLE
Solidarity with Local 2 Workers!

March 19 is the 8th anniversary of the invasion and occupation of Iraq. Today, Iraq remains occupied by 50,000 U.S. soldiers and tens of thousands of foreign mercenaries.

The war in Afghanistan/Pakistan is raging. Washington is financing Israel’s colonial occupation of Palestine, threatening Iran, stepping up hostility against Venezuela, Cuba and other progressive governments in Latin America, and bringing Korea to the brink of a new war. There are more than 800 U.S. military bases around the world.

While the U.S. will spend $1 trillion+ for war and occupation in 2011, 30 million people in the U.S. remain unemployed or severely underemployed, and cuts in education, housing and healthcare are imposing a huge toll on the people.

Now, new rounds of cutbacks in vital public services and jobs are underway at the federal, state and local level. Public and private sector unions are under severe attack.

12,000 SF hotel workers, members of UNITE HERE Local 2, have been fighting for 17 months for a new contract that protects their healthcare, wages and working conditions. On March 19, we will march to boycotted hotels in solidarity with the Lo. 2 workers.