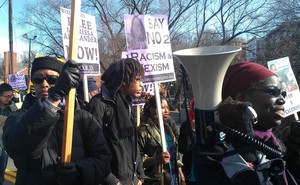 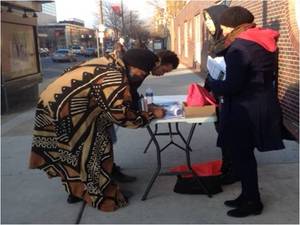 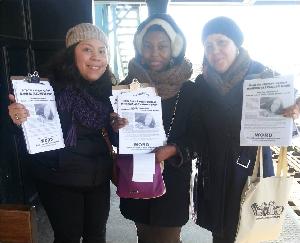 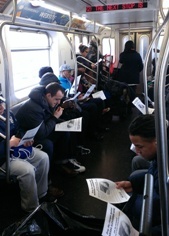 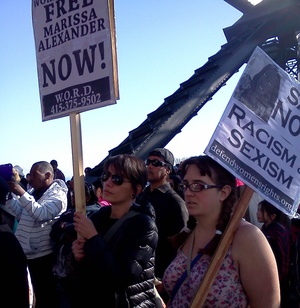 Now is the time to unite and intensify our efforts in spreading the word about Marissa's case and demanding her complete freedom.

Marissa is a survivor of domestic violence, and is only facing charges because of this racist and unjust legal system. There is no crime in defending yourself from abuse. Marissa acted in self-defense and injured no one. She should not be subjected to a second trial. All charges against her should be dropped immediately.

Read below for reports of some of the Jan. 18-20 actions and get involved:

The Free Marissa contingent attracted much support throughout the walk. Onlookers chanted “Drop the charges! Free Marissa now!” Women of all ages took to the mic to chant against domestic violence and in support of a woman's right to self-defense. The Peace Walk was part of an escalating movement in D.C. and across the country to express public opposition to the sexist and racist prosecution of Marissa Alexander.

On January 18, the newly formed Philadelphia chapter of WORD carried out our first outreach effort. The weather was unforgiving; it was freezing cold and very windy. However, we were determined to spread the word about Marissa Alexander’s case, and so we went to the intersection of Broad St. and Cecil B. Moore Ave. The area was less busy than usual, probably because of the cold, but to our surprise, despite the weather, people were extremely receptive to our message and many signed the petition.

People were stopping in their tracks, missing their trains and even waiting in line in the cold to sign the petition and share their outrage with us. We passed out tons of flyers, one to a cab driver while he was still in the cab. We even got a signature after we left our post and went to get something to eat. We are extremely proud of our work that day, and are especially thankful to the New York City chapter of WORD for their guidance and support.

Power to the people! A woman's place is in the struggle.

On January 19, New York City WORD organizers hit the trains to do outreach around Marissa Alexander’s case. While going train car to train car, WORD organizers gave short speeches regarding the injustice being committed against Marissa, handed out hundreds of flyers and urged people to sign the petition to demand all charges be dropped. The crowd was overwhelmingly receptive to the speakers and expressed their outrage about the case.

One passenger, who was eager to sign the petition, asked “How is it possible that they let George Zimmerman walk for the murder of Trayvon and they are still trying to prosecute this innocent woman for defending herself against her abuser. … This is ridiculous!” That was the sentiment of hundreds of people riding the train that afternoon, making it easy to gather petition signatures even on moving trains in the NYC subway system.

Marissa’s case hits home within the Harlem and Bronx communities, in particular because of the injustices committed within the criminal “justice system” against Black and brown people. There is a strong sense of urgency to fight back, to demand that all charges to be dropped, to and fight for Marissa’s freedom.

WORD in Sacramento marched with the ANSWER Coalition in the annual MLK parade and festival at the Capitol on January 20. Organizers passed out flyers and statements on Marissa's campaign and case, as well as information on cases connected to Marissa's on the basis of class injustice and how poor people are treated by the so-called justice system.

Hundreds marched in San Francisco's SOMA District to commemorate the legacy of the Rev. Martin Luther King Jr. on January 20. A contingent of WORD organizers participated in the march, carrying signs that demanded freedom for Marissa Alexander, and an end to racism and sexism. As the crowd poured into Yerba Buena Gardens, WORD passed out hundreds of flyers to spread the word about Marissa’s case and the struggle against anti-choice banners posted in downtown San Francisco.

Asheville WORD met downtown at the Vance Monument on January 18 to raise awareness about Marissa Alexander and her trial. We passed out flyers, asked people to sign petitions, and spoke out about Marissa’s mistreatment in the "justice" system and the challenges she is currently facing.

We got an excellent response. Almost everyone we spoke to signed the petition and expressed an interest in further involvement in the movement to free Marissa Alexander. We got emphatic support from the community.

On January 20 outside New Haven's City Hall, WORD-CT joined members and supporters of Decarcerate CT, a large new statewide coalition, in a powerful rally to end mass incarceration. Speakers from local social justice organizations, churches and student groups brought back the true legacy of Martin Luther King Jr. and decried the new Jim Crow from a variety of crucial perspectives.

The action incorporated militant chants as well as talks delivered by community members. Many of the speakers had experience inside the prison-industrial complex, and spoke about the racism and exploitation that it is comprised of. Creighton Chandler, an organizer with Seminarians for a Democratic Society, read a powerful letter to the event from a veteran currently behind bars for a nonviolent offense who reminded those in attendance that the only answer to ending the epidemic of mass incarceration is to fight back together.

WORD's signs, which featured Marissa Alexander and CeCe McDonald, were very popular at the action. A local teacher asked to take some of the signs to put up in her classroom to show her students examples of real fightback. Many people signed WORD's petition and pledged to take part in future actions and organizing efforts.

Volunteers in the Mid-Hudson region made presentations, handed out flyers about Marissa Alexander’s case and collected petitions demanding the charges against her be dropped at three events on Sunday and Monday of MLK weekend: in Woodstock at the 24th annual MLK birthday event, co-sponsored by Town of Woodstock; in Kingston at a film showing and discussion on The New Jim Crow at the Mid-Hudson LGBTQ Center; and in Kingston at an MLK event at New Progressive Baptist Church, co-sponsored by ENJAN, End the New Jim Crow Action Network.

Sign-up to receive emails from WORD to find out about future actions!